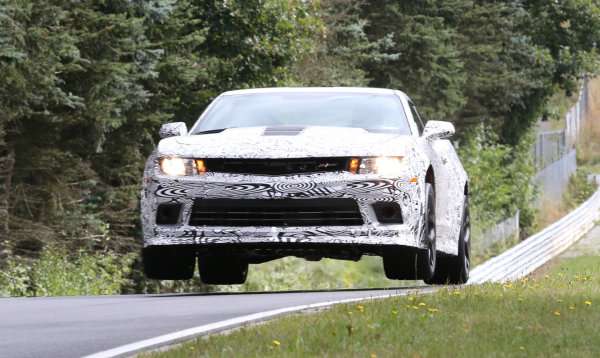 The 2014 Chevrolet Camaro Z28 Has a Flying Car Mode - Seriously

The 2014 Chevrolet Camaro Z28 is the best performing Camaro of all time so it should come as no big surprise that the new Z/28 actually has a feature called Flying Car Mode – an addition that helped the GM team to cut 5 seconds off of their Nürburgring lap time during testing of the newest Super Camaro.
Advertisement

Some of you might think that the 2014 Chevrolet Camaro Z/28 Flying Car Mode must be some sort of joke, but I assure you that this is a very real feature of the new Z/28. While there might be readers who are picturing something out of a sc-fi movie with wings sliding from under the 2014 Camaro Z/28 and a propulsion system popping out from under the tail lights, Flying Car Mode doesn’t allow the new Z/28 to fly. That would be silly. Instead, Flying Car Mode is designed to allow the Camaro Z/28 leave the ground for brief periods of time while racing and land safely – without the Z/28s traction control system hurting lap times.

A great many race tracks in the world – including the famed Nürburgring in Germany – include sections where a fast-moving car like the 2014 Chevrolet Camaro Z/28 can get air born. The Nürburgring has a section named the Flugplatz (German for airport) where almost every car to hit the track will catch at least a little air. The faster the car is moving and the lighter the car, the more air the car in question will catch when it blasts through the Flugplatz. The problem with this is that a car equipped with a modern traction control system can lose time when leaving the ground because when the wheels spin free with the hang time, the traction control system recognizes a loss of traction and it engages. When the traction control begins to work, wheel speed is reduced and when the car lands, that decreased wheel speed causes the car to slow down dramatically. To address that speed-killing problem, the GM engineers have added Flying Car Mode to the Performance Traction Management system of the 2014 Camaro Z/28.

When Flying Car Mode is activated, the ride height sensors of the 2014 Chevrolet Camaro Z/28 can detect when the car is off the ground so when the Z/28 catches air – the traction control system doesn’t engage. Instead, the system lets the wheels of the Camaro spin free so that when the muscle car lands, there is no reduction in wheel speed thus no negative impact on the lap time. These sensors also detect when the Camaro Z/28 is back on the ground and at that point, the traction control system is re-activated to help the driver turn in the best lap times possible. During testing of the 2014 Camaro Z/28 at the German Nurburgring, Flying Car Mode helped the team shave around 5 seconds from the record-setting lap time, but this new system was also fine tuned at tracks like Virginia International Raceway, Road Atlanta and the road course at GM’s Milford Proving Grounds in Michigan.

“The new Camaro Z/28 was bred on and for the track,” said Bill Wise, Camaro Z/28 vehicle performance engineer. “From the hardware bolted to the chassis to the software such as the “flying car” logic, every element built into it was designed to help deliver faster lap times, with consistency, control and dependability.”

To offer a more in-depth look at the Flying Car Mode of the 2014 Chevrolet Camaro Z/28, GM has put together the short video below showing the new Z in action on the track.

Toyota vs Tesla: Which Stock To Buy These Days
For Some Former Daimler Managers Daimler Is Authority, While Tesla Is Like a Startup
END_OF_DOCUMENT_TOKEN_TO_BE_REPLACED