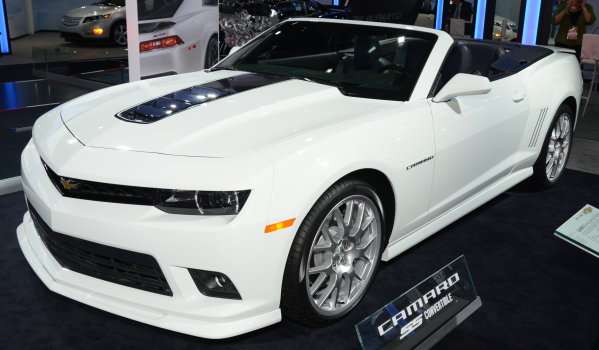 Even though the Camaro had one of its worst sales months since rejoining the Chevrolet lineup for 2010, the bowtie clad muscle car was still able to claim the muscle car sales title in January 2014 – comfortably beating both the Dodge Challenger and the Ford Mustang.
Advertisement

January 2014 was a pretty bad month for the American automotive industry in terms of sales due in part to the massive amounts of snow that pummeled much of the country but some of the most severely impacted vehicles were rear wheel drive muscle cars like the Chevrolet Camaro, the Ford Mustang and the Dodge Challenger.

Although Ford Mustang sales were actually up a bit from last January, both the Chevy Camaro and the Dodge Challenger had near-record bad months. I have been covering the muscle car sales race each month since the beginning of 2012 and over the course of the past 25 months – January 2014 was the second worst for the Camaro and it was the worst month for the Challenger by several hundred units. However, even with such an awful month for the Camaro, it was still able to beat out both the Ford Mustang and the Dodge Challenger to take the first step towards winning its 5th straight annual muscle car sales title.

In January 2014, General Motors delivered 4,733 units of the 2013 and 2014 Chevrolet Camaro. As mentioned above, that was one of the worst sales months for the Camaro since being introduced for the 2010 model year with only November 2012 being worse when the company sold just 4,464 Camaros. While there are a great many factors which impact the sales numbers of muscle cars like the Camaro, the fact that most of the US was battered by Old Man Winter in January played a big part of crushing sales of most vehicles – with the likes of the Camaro being the hardest hit.

Fortunately, the Camaro still sold enough units last month to beat the Mustang by more than 850 units so just like the Camaro has done in each of the past few years, the GM muscle car started off the year with a big win.

GM is eyeing its 5th straight annual sales title in 2014 while also continuing the shutout that it has posted since being reintroduced for 2010. However, 2014 should be the toughest for the Camaro due to the coming arrival of the 2015 Ford Mustang so the mighty Camaro will need to build as much of a lead as possible before the next generation Mustangs arrive.

The Ford Mustang managed to beat its cross town rivals in terms of growth in January 2014 as it was the only one of the three American muscle cars to actually show positive growth compared to the same month one year earlier. In January 2014, Ford sold 3,881 Mustang coupes and convertibles. This marked an increase of only 145 units but with both the Camaro and Challenger having awful months – the Mustang was the only model to show growth last month.

Unfortunately for Ford, that growth wasn’t enough to allow it to beat the Camaro but at least there was some bright point for the Motor Company.

Ford can expect to see Mustang sales figures grow during the course of 2014 for a variety of reasons. First, some people don’t like the look of the 2015 Mustang and those folks are likely to snatch up the current 2014 models before they go out of production. Next, the new 2015 Ford Mustang will arrive at some point in the year and that new model is guaranteed to bring about a big rush in Mustang sales.

Finally, once the 2015 models beginning hitting dealerships, those businesses will be offering deeper discounts on 2014 models still on the floorplan. Ford ‘should’ see the best Mustang sales numbers in years when the 2015s beginning arriving around the country.

LG's New EV Battery Plant Is a Welcome News for Tesla
Tesla Giga Berlin's New Hurdle: It's Not Only the Gov't, but Now Tesla Itself
END_OF_DOCUMENT_TOKEN_TO_BE_REPLACED