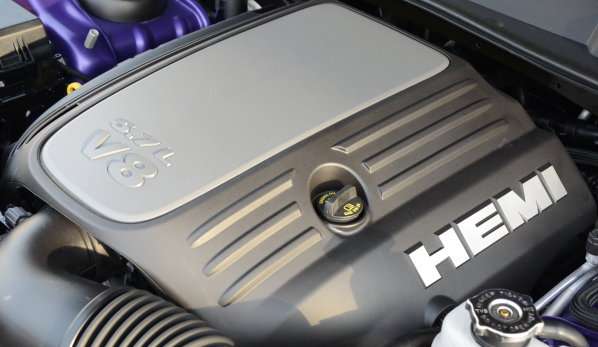 The folks at Allpar recently reported that their insiders have informed them that the 5.7L Hemi that powers the Dodge Charger, Dodge Challenger, Dodge Durango, Jeep Grand Cherokee, Chrysler 300 and Ram 1500 will be tweaked a bit to offer more power and possible better fuel economy. When the modern 5.7L Hemi was introduced in the mid 2000s with 340-350 horsepower (depending on the vehicle application), it was one of the most powerful and most efficient V8 engines available in the US market. However, the past few years have seen new motors from Ford and General Motors that have made comparable models more powerful and – in some cases – more efficient. Engines like Ford’s 5.0L V8 in the Mustang, Chevrolet’s LS3 V8 from the Camaro SS and most recently, the new 6.2L truck engine offered in the half ton truck lineup all offer more power than the Mopar competition and although the SRT lineup has the larger and more powerful 6.4L Hemi for the Challenger SRT, the Charger SRT and the Ram 2500 HD, the high volume models that rely on the 5.7L Hemi are often at a disadvantage when pitted head to head with the competition.

Fortunately for the Mopar faithful – new rumors being discussed around the automotive water cooler suggest that the Charger, Challenger, Ram and other models relying on the 5.7L Hemi could soon be getting a jump in horsepower to help them better match up with the competition. Unnamed sources have confirmed the improvements in power and efficiency to Allpar and TorqueNews insiders have also stated that the 5.7L Hemi is on track to be revamped in the next couple model years. None of these sources have explained what Chrysler Group engineers will do to squeeze more power out of the 5.7L Hemi nor have any concrete power numbers been quoted but based on what the Hemi is capable of in the aftermarket performance world and when looking at what the competition has to offer – we can make some guesses as to what we might see in the future high volume Hemis.

The 5.7L Hemi currently at work in the Dodge Challenger R/T offers 372 or 375 horsepower (depending on the transmission chosen) and 410lb-ft of torque while the four door Dodge Charger R/T packs 370hp and 395lb-ft of torque. There is really no domestic competition for the Charger but the Dodge Challenger has to compete with the Ford Mustang GT which offers 420hp and 390lb-ft of torque and the Chevrolet Camaro SS which packs 426hp and 420lb-ft of torque. My sources have indicated that the 5.7L Hemi engines being tested right now offer “over 400 horsepower” and “more torque than the current Challenger R/T”. Even if the new 5.7L Hemi only jumps to 410 horsepower and 425lb-ft of torque – both of which are very realistic figures with some minor tweaks here and there – it would go a long way in closing the gap between itself and the powerful V8 muscle car engines offered by the cross-town rivals. Dodge has proven that the Challenger will sell with less power than the competitors so the Chrysler Group doesn’t necessarily need to beef up the 5.7L Hemi to beat Ford’s 5.0 and GM’s LS3 but if they can close the gap between the Challenger and the other American muscle cars – it could pay off in the sales race.

Over in the truck segment, the 5.7L Hemi from the 2014 Ram 1500 offers 395 horsepower and 410lb-ft of torque and while that is enough to best both Ford and GM’s highest volume truck engines – Ford’s 6.2L V8 (411hp/434tq) and GM’s 6.2L V8 (420hp/460tq) both offer a big advantage over the Hemi Ram. As the owner of a slightly older Hemi Ram 1500, I know that a simple tune, intake and exhaust package can greatly increase the output so increasing the output of the current 5.7L Hemi in the 2014 Ram 1500 to a level that will allow it to beat out Ford’s 6.2L V8 shouldn’t be all that big of a problem. On the other hand, juicing the Hemi to best the new 6.2L V8 from the Chevy Silverado and the GMC Sierra could prove to be a bigger challenge but having the bragging rights of being the most powerful will make a much bigger difference for the future Ram truck lineup versus the competition than it will for the Chrysler Group Hemi-powered cars. Because of that, I fully expect to see the Ram 1500 with a standard Hemi V8 in the next few years that offers at least comparable figures to those offered by the Silverado and Sierra.

While we don’t know what the Chrysler Group engineers will do to the 5.7L Hemi to offer more power in the Dodge Challenger, Charger, Durango and Ram 1500 – the company needs to do something to help keep up with the competition and packing more power into all of these vehicles should do the trick.

Tim McKenzie wrote on January 2, 2014 - 8:31am Permalink
Good article. All the 5.7 Hemi guys I know have been "screaming for a power bump," for over 3 years now. Hopefully they get it. I hope those changes are applied to the 6.4. That motor should be getting 500 HP by now. One correction, Quote: "There is really no domestic competition for the Charger ...." The new Chevy SS Impala is a powerful 4 door sedan that is a direct competitor to the Charger.
Patrick Rall wrote on January 2, 2014 - 11:36am Permalink
The Chevrolet SS should be a good competitor for the Charger but the Pontiac G8 was supposed to be a Charger fighter as well, and it never really got off of the ground. There is also the problem that the SS is being marketed as a more upscale vehicle with very few options where the Charger has a very full model line.
Lance Parker wrote on March 19, 2016 - 7:43pm Permalink
I would like more power and all, however my 2015 Challenger R/T 5.7 with the 3.90 rear gears 6 speed manual BONE stock; super track pack car; Can pull 22.4 MPG. I left a 2007 mustang GT that was putting 335 HP on the Dyno to the rear wheels that would only pull 21 maybe 21.2 with 3.23 rear gears. No complaint here Mopar!! Just wish the after market would come on!!
mattador wrote on April 12, 2016 - 8:54pm Permalink
It's amazing how Dodge can manage to get so little power out of its 5.7L HEMI V8... It supposedly has dual VVT... Their V6 3.6L Pentastar is 70hp fewer. Honestly, their engine seems crap and the car is a bloated pig. I would have bought one of these in a heartbeat as the Challenger is my all time favorite car. Instead I bought a Mustang.
Tim McKenzie wrote on April 13, 2016 - 10:24am Permalink
Enjoy your "mass tang." I owned a 5.7 before I bought my 6.4 SRT (which is faster than your teenager car). The 5.7 is a fine motor. It gets good torque at all RPMs. The 5.0 is a fine high revving motor. Physically, it is larger than the 392. It gets power from having more valves and high rpm. In normal operating rpm it lacks torque IMO. As for bloated, the challenger is a muscle car. The Stang is a sports car. I want it big.
Mickey dubbz wrote on October 11, 2017 - 12:49pm Permalink
When you're 6'0" tall over over( or a stocky 5'10 plus) you get sick of squeezing into cars just because the tiny cramped cars are all the rage of modern society- we are seeing toyota celica secretary cars sold as " sporty" and the ricer boys have wet their pants over...a 300 hp civic that is selling at a sticker price that goes past what the base line v8 of dodge, ford or Chevrolet muscle! Some of us love our so called " boat"..it handles well on the open road and highway, holds its own on the streets( have YET to see a Mustang or camaro really blow me off red light to red light!) and at the end of the day after shitty traffic I can actually get out my challenger R/T WITHOUT having to stretch my legs and back or feeling exhausted. I used to own a Mustangs ( 1990, 2007, 2012)- loved that they were fast and small, but then I grew up and got sick of feeling BEATEN after a grueling 2 hr grid lock traffic commute! Thanks to MOPAR we have a car ( cars- Charger as well as Challenger) that MEN can be MEN again. Tim Mckenzie understands what you obviously don't. As for ranting about the power of mustang? I see MORE women driving them and the Camaros!!! ...and those WOMEN look and smile when my R/T with its corsa exhaust stage one scatpack kit pull up; apparently they like LOOKING at the big " man boat"...