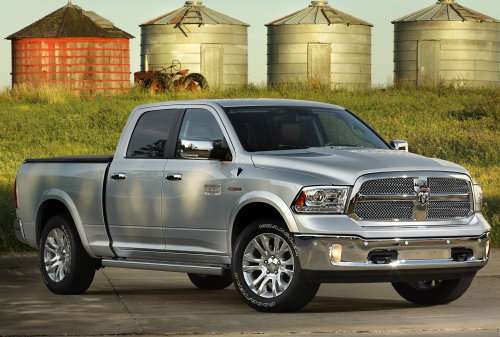 The official fuel economy figures for the 2014 Ram 1500 have hit the internet and thanks to the new 8-speed automatic transmission, the half ton Ram pickup has the most efficient V6 and V8 options in the modern truck segment – while also posting very similar fuel economy figures and more power than Ford’s EcoBoost V6.
Advertisement

The 2014 Ram 1500 will come with either the 3.6L Pentastar V6 or the 5.7L Hemi V8 with the new 6-cylinder EcoDiesel slated to arrive later this year. Due to the late availability of the new diesel engine, the fuel economy figures for the new oil burner aren’t available but we do have basic figures for the rest of the lineup, including both a 6- and 8-speed automatic transmission for those trucks fitted with the mighty Hemi along with numbers for 4x2 and 4x4 configurations.

The most efficient option for 2014 Ram 1500 buyers is the 3.6L Pentastar V6 in High Fuel Economy (HFE) trim which yields 18 miles per gallon around town and 25mpg on the highway while packing 305 horsepower and 269lb-ft of torque. Those who opt for the base 4x2 Ram 1500 with the Pentastar V6 (rather than the HFE package) will only lose 1mpg around town but you will still get the 25mpg on the open road. Even in base form, the 2014 Ram 1500 V6 models offer 2 more miles per gallon on the highway over the base model Ford F150 V6 while Ram 1500 HFE owners will also enjoy an advantage around town of 1mpg compared to the Ford.

When you equip the 2014 Ram 1500 Pentastar with 4 wheel drive, fuel economy of the base truck drops to 16mpg around town and 23 on the highway – beating the Ford F150 base model by the same 2mpg on the highway as the 2WD trucks.

The big news for the 2014 Ram 1500 is the addition of the new 8-speed automatic transmission option to trucks fitted with the 5.7L Hemi V8. The Hemi has traditionally posted strong fuel economy figures but the new 8-speed gearbox makes the 2014 Ram 1500 the most fuel efficient V8 truck on the market right now. The Hemi-powered, rear wheel drive 2014 Ram 1500 with the new 8-speed transmission will offer 15 miles per gallon around town and 22mpg on the highway while still packing 395 horsepower and 407lb-ft of torque. Adding 4 wheel drive only causes the 2014 Ram 1500 to drop by 1 mile per gallon with 15 around town and 21 on the highway. The closest V8 competitor right now is the 5.0L Ford V8 that offers 15 in the city and 21 on the highway (RWD) and 14 city/19 highway (4WD) but that F150 engine only offers 360 horsepower and 380lb-ft of torque so while the fuel economy is close to the Hemi – the power output is not. Ford also has the 6.2L V8 that is used in the higher end F150 packages and while it offers an advantage in power with 411 horsepower and 434lb-ft of torque, fuel economy figures of 13 city/18 highway for the rear drive trucks and 12 city/16 highway makes the Raptor’s 6.2L V8 one of the least efficient half ton truck engines on the market today.

In any case, the 2014 Ram 1500 trucks fitted with the 8-speed automatic transmission behind both the Pentastar V6 and the Hemi V8 have the bragging rights of being the most efficient trucks in their respective engine class on the market today. This does not include the new General Motors half ton trucks so things could change when the EPA publishes their certified numbers for the new Silverado and Sierra but for the time being – the Ram is the MPG King for the base and V8 level trucks.

It should be noted that right now, the most efficient half ton truck on the market continues to be the Ford F150 powered by the EcoBoost V6 which offers identical numbers of 15/21 with 4WD as the Hemi with 4WD but the rear drive EcoBoost’d F150 has an advantage of 1mpg around town that will allow Ford to continue to brag about having the most efficient half ton truck in America. However, it is widely expected the when the new 6-cylinder diesel engine option arrives for the 2014 Ram 1500, it will comfortably beat Ford’s EcoBoost.