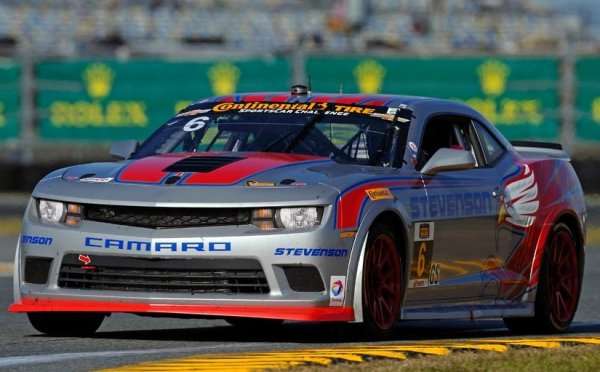 The new Chevrolet Camaro Z/28.R made its racing debut this past weekend at the first leg of the 2014 Continental Tire SportsCar Challenge and much like their bigger brothers in the Rolex 24, the new Camaro race cars didn’t have the success that the teams had hoped.
Advertisement

A few weeks back we introduced our readers to the new Chevrolet Camaro Z/28.R. This new track-only race car was designed and engineered after the new Camaro Z/28 to replace the successful Camaro GS.R that has been winning around the world of endurance racing for the past few years and the first major test for the new Z/28.R was the BMW Performance 200 at Daytona International Speedway this past weekend. Two teams – Stevenson Motorsports and CKS Autosport – showed up to Daytona with the new Z/28.R and six experienced racers ready to tackle the best from Ford, Porsche, BMW, Nissan, Subaru and Aston Martin in the GS class.

Things got off to a pretty good start for the Chevrolet Camaro Z/28.R when the #01 Camaro campaigned by CKS Autosport grabbed the 4th spot in the Grand Sport class and the 4th spot overall for the 2.5 hour race around Daytona International Speedway’s road course. The #9 Camaro Z/28.R from Stevenson Motorsports qualified in the 5th spot (in class and overall) while Stevenson’s #6 Z/28.R qualified 8th (in class and overall). Three Camaro Z/28.R race cars in the top 8 starting positions overall…things were good for the BMW Performance 200 but the good news wouldn’t continue for very long.

As the field went through the motions of the customary pace laps prior to the start of the BMW Performance 200, the #9 Stevenson Motorsports Camaro Z/28.R being driven by Matt Bell pulled to the side of the track from his #5 starting position and coasted to a stop. The rest of the field cruised past en route to the green flag but for Bell and his Camaro Z/28.R it would take a tow to the garage area to repair a broken fuel line. By the time he finally got the #9 Camaro on the track for the race, he was 8 laps down to the leader. Along with Andy Lally, Bell and the #9 team made the best of a bad situation, using the remainder of the race as an elaborate test session to help better prepare them all for the rest of the season.

“We had a fuel line break free before we could take the green,” said Bell. “This stuff happens when you have a new car. It’s too bad it happened during the race but you know besides that, the car was great. The handling was there. It’s one of the easiest cars I’ve driven. I kind of treated it like a test session, going out and trying to see what the car would do.”

While things got off to a rough start for the #9 Stevenson Camaro Z/28.R, the early stages of the race went much better for their teammates in the #6 Camaro. Andrew Davis started the race in the #6 Z/28.R and spent much of his run in the top ten before handing over the car to Robin Lidell. Lidell continued the early success of the #6 Camaro until a differential failure nearing the 2 hour mark knocked the stronger of the two Stevenson Z/28.Rs out of the race altogether.

“It was a pretty catastrophic failure,” said Liddell. “I jumped out of the car in Turn 5 where we stopped and had a look under it but all I could really see was a bit of oil under the diff. It went with absolutely no warning whatsoever, nothing, just immediate. I went to power at the exit of Turn 3 and it just, bang, big bang, then something flapping, something not happy back there mechanically, a lot of banging and clattering and that was it.”

The one bright spot for the new Chevy Camaro Z/28.R race car was the #01 from CKS Autosport. After qualifying in the 4th position, Eric Curran and Lawson Aschenbach spent the day battling for position in the top ten. Late in the race the metallic blue CKS Camaro dropped out of the top ten, finishing 13th overall (and 13th in the class) but penalties to two of the cars finishing ahead of them put them in a final finishing position of 11th place. Certainly not the win that they had hoped for but the team finished on the lead lap just 7 seconds behind the winner while posting a faster ‘best lap’ than many of the cars that finished ahead of them.

The BMW Performance 200 was- fittingly- won by the #48 BMW M3. Technically, the #96 BMW M3 won but that team was disqualified for failing the post race inspection so the win was awarded to the #48 BMW. BMW’s also finished 2nd, 3rd and 4th (after the DQ) while an Aston Martin Vantage rounded out the top 5. The best finishing American cars were a trio of Ford Mustang Boss 302R’s that captured the 7th, 8th and 9th positions. The best finishing non-Z/28.R Camaro (an “old” Camaro GS.R) finished in the 18th position so the new Z/28.R did have a better outing than those teams running the cars that the new Z replaced. Also, Chevy Racing fans got to celebrate the Rolex 24 victory by the Corvette DP teams although the 24 hour race didnt go so well for the new Corvette C7R.

The teams fielding the new Chevrolet Camaro Z/28.R will be back in action on March 13-14 as the take to the turns of Sebring International Raceway for the grueling 12 Hours of Sebring event.