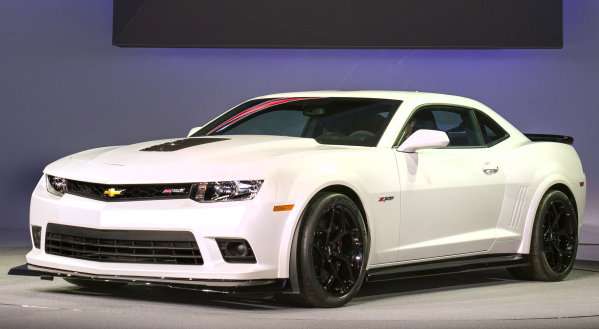 If you were thinking about buying a 2014 Chevrolet Camaro Z/28 but you felt that (somehow) the 505 available horsepower just wasn’t enough you are in luck – as Callaway Cars has just announced a limited edition package that increases the output of the Z/28’s LS7 engine up to a whopping 652 horsepower.
Advertisement

Callaway Cars of Connecticut is best known for their high performance tuning efforts in the world of the Chevrolet Corvette including the somewhat controversial Callaway Corvette AeroWagon but the GM super tuner has recently turned their attention to the incredible new 2014 Chevrolet Camaro Z/28. The 2014 Camaro Z/28 is being billed as the most track capable Camaro of all time, but some have criticized the fact that the Z/28 “only” offers 505 horsepower from the naturally aspirated LS7 V8 while the Camaro ZL1 packs 580 horsepower. Fortunately, the Camaro Z/28 features a variety of components that were originally offered on the Corvette Z06 so Callaway has experience with many of the Z/28’s components and that paid off big time with the new Callaway Camaro Z/28 SC652.

It should be noted that this is not Callaway’s first Camaro as they currently offer a pair of packages for the 2014 Chevrolet Camaro SS – one that produces 562 horsepower with an automatic transmission and one that produces 582 horsepower with a manual transmission – but this is by far Callaway’s most powerful Camaro. The tuning company began by adding a Eaton TVS 2300 supercharger to the 7.0L V8 which, when combined with a high flow intake system, a water to air intercooler, larger fuel injectors and a low restriction exhaust system increases the output of the Z/28 from 505 horsepower and 481lb-ft of torque to 652 horsepower and 620lb-ft of torque. This is enough for the Callaway Camaro Z/28 to rip from a stop to 60 miles per hour in just 3.7 seconds while running the quarter mile in 11.5 seconds with a speed of 124 miles per hour.

Callaway has left the rest of the working components of the standard 2014 Chevrolet Camaro Z/28 untouched so buyers will enjoy the same Brembo carbon ceramic brake package and the spool-valve damper suspension setup as non-Callaway Z/28 models. Callaway has, however, added a handful of dress up items that allow these specially tuned super Camaros to stand out from your run of the mill 505hp Camaro Z/28. This includes Callaway badging inside and out, an underhood build plaque, carbon fiber injector covers, a dash plaque inside of the car, floormats embroidered with the Callaway logo, unique door sill guards and a Callaway key fob.

Two pieces of bad news surrounding the Callaway Camaro Z/28. First, only 10 examples will be offered and second – those who are among those ten lucky buyers will have to pony up $19,995 for the Callaway package. When combined with the base price of the 2014 Camaro Z/28, this Callaway monster muscle car carries a price of roughly $94,995…plus tax, title and all of the other little expenses incurred when both buying the new Camaro and having it converted into a Callaway Z/28. Callaway plans to begin installing these ten limited edition packages as soon as the Z/28 begins reaching dealerships – and new owners – later this year.

The 2014 Chevrolet Camaro Z/28 is billed as the best handling and most track capable Camaro of all time and it has already proven this by turning in the fastest time around the famed German Nürburgring of any American muscle car ever. It is easy to guess that adding 147 horsepower and 139lb-ft of torque will allow the Callaway Camaro Z/28 to get around “The Ring” at least a little quicker than the 7:37 turned in by the standard Camaro Z/28. Of course, I would also guess that the Callaway Z/28 will beat a great many cars – both American muscle cars and other performance cars from around the world – around most other tracks as well.

Jamie wrote on February 26, 2014 - 4:46pm Permalink
It would have been Great "IF" the 652 hp version was naturally aspirated. But, with the adding of the supercharger and water weight of intercooler, etc., probably adds at least 250-300 lbs. making it GAIN the weight that the manf. took off. It's probably fattened up to 4000 lbs WITHOUT driver which defeats the purpose of what this new Z28 was designed for....road/track course. Not a good mod for road racing course. Too FAT!! Screws up weight distribution too. Degeats the purpose.