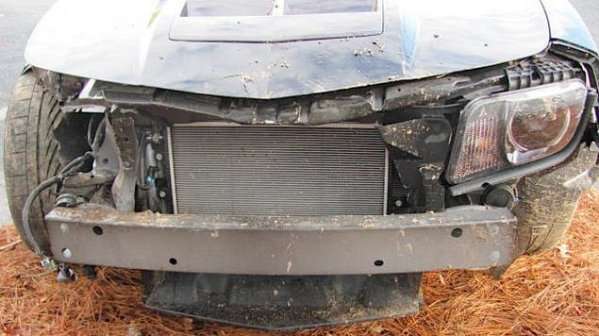 In the middle of last month we brought you the story of a 2012 Chevrolet Camaro ZL1 that was stolen by a dealership employee and wrecked – leaving the owners and customers of the dealership without their high performance GM muscle car but the family has since received their new Camaro ZL1 as a replacement with some special features making this Camaro even more rare and more valuable than the car that was totaled.
Advertisement

A quick background on the saga of the stolen and wrecked 2012 Chevrolet Camaro ZL1 #1635 that was owned by John and Debbie Hooper. The Hoopers had taken their supercharged super-Camaro to Georgetown Chevrolet for some simple warranty repair work and since is a dealership and nothing can get done in a timely manner at dealerships – the Hoopers had to leave their Camaro ZL1 at the dealership over the weekend. On Sunday December 15th, Georgetown Chevrolet service writer Eric Peterson broke into the closed dealership and stole the Hooper’s Camaro ZL1 but while out trying to learn how the other half lives – the thief wrapped the car around a pole.

The Hooper’s Camaro ZL1 was totaled and over the weeks following that, the dealership did a lackluster job of making good on the fact that their employee stole the car while in their possession. You can click here to read the initial report on the headache that the Hoopers went through in December 2013 and January 2014.

Fortunately, TorqueNews and many, many other media sources covered the story of the Hooper’s Camaro ZL1 and as a result of the media frenzy, General Motors caught wind of the actions of the deadbeat dealership. GM contacted a few dealerships and found that Berger Chevrolet had a brand news 2013 Camaro ZL1 that would serve as a proper replacement for the Hooper’s 2012 ZL1 so in cooperation with GM, Berger shipped the new ZL1 to Georgetown Chevrolet. We reported this good news back on January 16th but it was unclear as to when the couple would actually get their new Camaro and with the story seemingly coming to an end, it took some hunting around to find out what happened.

It turns out that John and Debbie Hooper finally took delivery of their new 2013 Chevrolet Camaro ZL1 on Friday, February 4th It took six weeks of patience by the Hoopers but GM and Berger Chevrolet did their best to make up for the headache experienced by the owners of ZL1 #1635. The car sent to Delaware was not just any 2013 Camaro ZL1 but instead, it was a rare Berger Chevrolet model that included a handful of unique features like a blacked out grille, unique wheels, custom graphics and special floor mats. Finally, Berger Chevrolet included a laminated card signed by the Berger family that reads “This car was built for John Hooper”.

Some reports have included quotes from representatives from Georgetown Chevrolet and their parent First State Chevrolet – whining that they have been pounded with rude phone calls, emails and social media postings but it seems to me that the dealership got exactly what they deserved. Their own internal security setup – or lack thereof – allowed one of their employees to steal the Hoopers 2012 Camaro ZL1 and wreck it, but when the time came for the dealership to bite the bullet and make good on the whole situation they totally dropped the ball. This should serve as a reminder to dealerships and shops around the country that when you take possession of a customer’s car – you are responsible for it when in the hands of your employees.

Kudos to General Motors and Berger Chevrolet for stepping up and fixing this problem for First State Chevrolet and the Hooper family.

Jack Spratt wrote on February 12, 2014 - 5:37am Permalink
This should be a good lesson to other dealers. If you screw up royally, you best make it right in short order or the bad publicity will kick your @ss. And by the same token, making it right immediately could do wonders for your reputation.