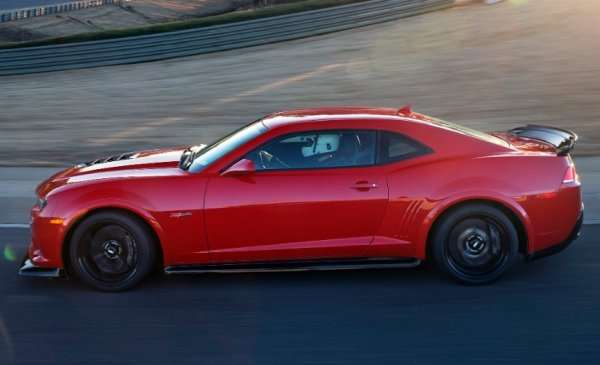 General Motors has offered up a list of 28 reasons why the 2014 Chevrolet Camaro Z/28 will rule the road course but realistically, these are 28 key points about the new Z/28 that clarify why it is likely the best Camaro of all time.
Advertisement

The 2014 Chevrolet Camaro Z/28 is not the most powerful Camaro of all time – it isn't even the most powerful Camaro on sale today. However, General Motors designed this new Z/28 to be more than just your average American muscle car with tons of power and no real regard for other areas of performance. The 2014 Camaro Z/28 was designed and engineered to be the best handling Camaro of all time while still packing enough power to make it one of the fastest factory-issue Camaros of all time. The 2014 Z/28 is the total package with a super powerful drivetrain, a lightweight chassis, a purpose built body with superior aerodynamics, a track tuned suspension package, a race ready braking system and none of the weight-adding junk that isn’t needed on the race track. It is street legal but it is as close to a race car as you can get in terms of factory road cars.

While the high performance world eagerly awaits the arrival of the Z/28, General Motors has issued up a list of 28 reasons why the 2014 Camaro Z/28 rules the road course but these could just as easily be 28 reasons why the new Z/28 stands to be the greatest Camaro or all time. These 28 items are broken up into 7 categories with long explanations on each key point but we have listed them all with shorter summaries below.

Exterior Design and Aerodynamics
1. Rear spoiler with ‘wickerbill’ – the wickerbill is a small lip on the trailing edge of the rear spoiler. While subtle, it allows for greater downforce, improved stability and improved handling through high speed turns.
2. Unique front fascia – the front fascia is lighter than the unit found on the Camaro SS while the large lower fascia opening helps to improve air flow to both feed and cool the engine.
3. Front splitter – the front splitter extends out away from the base of the front fascia to help improve front end downforce substantially.
4. Hood extractor – the carbon fiber hood extractor helps to keep the Camaro Z/28’s LS7 engine cool by venting the engine bay.
5. Rocker moldings and wheel flare moldings – these subtle features help to control the air flow across the wheel opening and around the Camaro’s high performance wheels and tires.
6. Front wheelhouse liners – while you cannot see these in passing, the revised wheelhouse liners help to perfect the airflow under the Camaro Z/28 and around the wheels.
7. Belly pan – the Camaro Z/28 features an elaborate belly pan that both reduces lift at high speeds and helps to cool drivetrain components by funneling cool air through the most vital portions of the underbody area.

Weight Reduction
8. Thinner rear window glass – the Camaro Z/28 doesn’t need to be whisper quiet so the team has fitted this race ready beast with thin rear glass to cut weight.
9. Lightweight rear seat – the Camaro Z/28 is a street car and there will be times where you want to impress three people at once with a ride along so this beast has a rear seat – but it is thinner and lighter than the rear seat in the other 2014 Camaros.
10. Lightweight wheels and tires – the Camaro Z/28s slick looking black wheels feature a lightweight design that allows them to be about 20 pounds lighter than the wheels on the Camaro SS. Also, the ultra high performance tires are 30 pounds lighter than the Camaro SS tires.
11. Carbon ceramic brake rotors – the Camaro Z/28 features carbon ceramic brake rotors that provide as much stopping force as any braking setup available in the world. This setup is also lighter than a more traditional steel brake system.
12. No Air conditioning – AC is nice – but it is heavy. The Camaro Z/28 doesn’t feature an air conditioning system which in turn allowed the team to cut about 28.4 pounds from the new Z/28.

Powertrain
13. LS7 engine with dry-sump oiling – the LS7 engine features 500 horsepower and 470lb-ft of torque while a dry sump oiling system makes sure that this monster mill is kept well lubricated under even the toughest racing conditions.
14. Air intake system – the Camaro Z/28 features an air intake system that calls on a K&N conical filter in a sealed system to make sure that only cool outside air is sucked into the LS7 engine.
15. Track-capable fuel system – a normal fuel system could starve the engine under stints of hard acceleration or hard cornering, but the 2014 Z/28 features a system that ensures quality fuel pressure at all times.
16. Active dual-mode exhaust system and high-flow converter assembly – this exhaust system doesn’t technically make the Camaro Z/28 any better for track use but the dual mode setup allows the exhaust to be free flowing for good power when you want that while also being quiet enough for street use when you don’t want to make your neighbors hate you.
17. TREMEC TR6060 six-speed manual transmission – this is the same transmission found in the Camaro ZL1 and the Cadillac CTS-V so it has proven itself as being able to withstand the test of time with a whole lot of power being funneled through to the wheels.
18. 5.1-ratio short-throw shifter – smooth, quick shifts are vital for racing and the Camaro Z/28 has a shifter that ensures the quickest shifts possible.

Chassis and Suspension
19. Strut tower brace – this helps to keep the suspension system and chassis of the Camaro Z/28 as stiff as possible under hard cornering…thus improving lateral grip and handling.
20. Zero-preload limited-slip differential – this setup allows the Camaro Z/28 to get incredible traction when accelerating out of a corner when compared to a more traditional limited slip differential.
21. Differential cooler – racing is hard on drivetrain components and during the course of a race, the rear differential can get very, very hot. Excessive heat can cause component failures so GM fitted the new Z/28 with a differential cooler to help keep things running smoothly.
22. Uprated lower control arm ride link “travel limiter” bushing – this addition allows for a stiffer ride and improved steering feel compared to the Camaro SS.
23. Uprated rear upper control arm bushing and lower trailing link bushings – these heavier duty bushings allow for improved high speed handling and improved durability to endure the rigors of road racing.
24. Higher-rate coil springs and smaller-diameter stabilizer bars – the Camaro Z28 features springs that are 85% stiffer in the front and 65% stiffer in the rear compared to the Camaro SS. This allows for improved high speed handling while the unique stabilizer bars improve grip during braking, cornering and accelerating out of a turn.
25. DSSV® damper technology – the 2014 Camaro Z/28 is the first road car to feature Dynamic Suspensions Spool Valve damper technology from Multimatic. These dampers are twice as stiff as the ones on the Camaro SS while also offering improved response and stiffness on the track while still offering a smooth enough ride to be able to call it a street capable suspension system.
26. Performance Traction Management – this high tech system allows the driver to be particularly heavy footed with the accelerator without letting the LS7 roast the tires, especially when coming out of a turn. This system prevents unwanted wheelspin while not altering performance too severely for track purposes.
27. Nineteen-inch wheels and Pirelli PZero Trofeo R tires – a proper high performance car needs proper high performance shoes and the lightweight 19” rims wrapped in the stickiest street tires possible.
28. Brembo® carbon ceramic brakes – questionably the best braking system available on a street legal car in the world, the Brembo carbon ceramic brake setup brings supercar stopping performance to the 2014 Camaro Z/28.