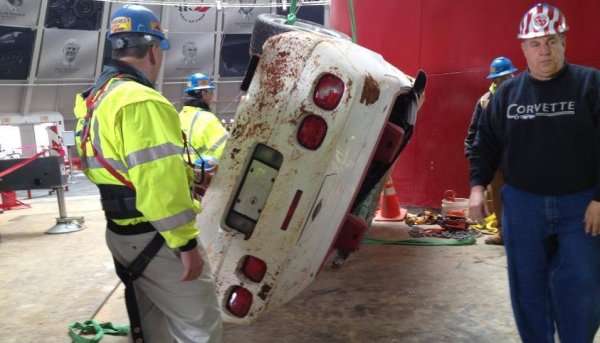 It has been expected since the sinkhole under the National Corvette Museum swallowed up 8 historic American sports cars last month that they would be fixed, but a great many people believe that not all of the cars should be fixed – and I agree.
Advertisement

The National Corvette Museum sinkhole tragedy in early February caused eight historic and/or rare Chevrolet Corvette coupes and convertibles to plunge into a hole that is at least 40 feet deep. General Motors was quick to step up and announce that once the cars are out of the hole, the automaker will take them back and restore them to a like-new condition. Since then, we have covered a great many topics from the National Corvette Museum including the extraction of the first five cars and throughout our coverage, we have been receiving messages from readers insisting that not all of the cars should be restored. While it hurts me to my core as a gearhead and lover of American performance cars to see these Corvettes all mangled up, I am inclined to agree that at least one of these wrecked Corvettes should be repaired.

Like it or not, the sinkhole that caused the floor under the National Corvette Museum’s Skydome has become a part of the Corvette’s history that we will never forget. For car guys, the Corvette Museum sinkhole is something that will be talked about for decades because - as automotive events that don’t claim any lives go – having 8 famous Corvettes fall into a 40 foot deep hole in the Earth is about as big a tragedy as they come. This incident will be talked about for years and there should be a reminder of the power of nature in even the most carefully planned structures crafted by man. While there will always be pictures, videos and personal accounts of the National Corvette Museum sinkhole, nothing will continue to draw museum goers attention and tell the sinkhole story like one of the cars. That leaves the question – which Corvette do you leave damaged?

TorqueNews reader and Corvette owner Scott Parkin said it best with his thoughts on which Corvettes should be left damaged…and why:
“Both the 1,000,000th and the 1,500,000th Corvettes should be put on display how they are when removed, otherwise they might as well put out any other example of the same year. In my mind refurbishing is just a "Ship of Theseus". As time goes on, the ship is worn and slowly repaired - a plank here, a rope there, a bolt there - 200 years down the road the ship still looks the same, but every part had been replaced multiple times, so is it really the same ship?

The others can be repaired, but the 1,000,000th and the 1,500,000th Corvettes should remain (as they are when removed). These 2 specific cars are like "Superbowl Game Used Jerseys". They are something very specific, right off the line, that if altered are no longer the same. I think all of the other vehicles are either customs, prototypes, or just an example of a special model (i.e. the 40th Anniversary is one of 6,749). I don't really have a problem with repair work to the other vehicles, but at least to me, repairing the 1MM and 1.5MM is the same as taking your Super Bowl XXVII game worn Aikman jersey to the dry cleaners. By the time they are done with the 2 of them, they might as well have just swapped the VIN plates.” To elaborate a little further on what Scott had to say, we should keep something in mind about these two cars. The 1,000,000th and 1,500,000th Chevrolet Corvettes were more or less identical to the cars built right before them and right after them. Outside of their build sequence number, there was really nothing special about them and there are plenty of cars still on the road today which are nearly identical to either of these Corvettes…shy of the significant build number. The 1,000,000th Corvette is already out of the hole and it is in surprisingly good shape, but the 1,500,000th Corvette could be the deepest buried car in the sinkhole. Considering how badly damaged the PPG Pace Car was when it came out, the 1,500,000th Corvette could be completely annihilated. Should it be as bad as many expect, General Motors will end up basically building a new car that looks like the real 1,500,000th Corvette. Literally every single part could be damaged enough to be replaced so it seems like leaving that car damaged would make the most sense. Keeping that Corvette alongside the far less damaged 1,000,000th Corvette could not only give museum visitors a look at the damage – it would also offer a look at how differently the cars were damaged. Finally, since both of these cars are similar to every other Corvette made during that specific production run, the museum could easily acquire undamaged versions of each to create an amazing four car display showing the slightly damaged 1,000,000th Corvette, the badly damaged 1,500,000th and two cars that have been painted to look like the damaged cars prior to the sinkhole chewing on them. As Scott also pointed out in our discussion from which his quote above was taken, a display showing the damaged cars alongside pristine examples of similar cars would likely be the most impactful display at the museum…thus one of the most popular.