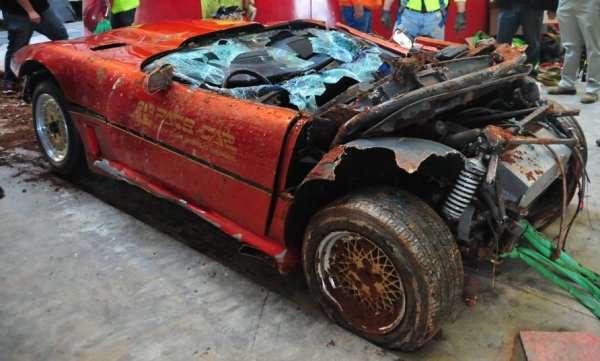 The crew working on the National Corvette Museum surprised us all late yesterday afternoon when they pulled the 1984 PPG Pace Car up out of the sinkhole – but this surprise wasn’t as great as the 1,000,000th Corvette coming out of the hole as the customized ’84 Pace Car is by far the most badly damaged thus far.
Advertisement

When the team responsible for pulling the 8 damaged Corvettes out of the sinkhole under the National Corvette Museum set up their initial time table, they planned to remove the three cars sitting on top of the pile (2009 Blue Devil, 1962 Corvette, 1993 40th Anniversary Edition) early this week and then spend days – or weeks – planning on how to best get to the rest of the cars buried in the debris from the building. However, once those first three cars were extracted and a few larger pieces of museum flooring had been removed, the crew discovered that the 1,000,000th Corvette (white 1992 Convertible) was accessible so they went ahead and removed that car as well. In addition to the first three cars, the damage to the 1,000,000th Corvette appeared to be largely focused on the body while the chassis itself was in pretty good shape. After removing the ’92 Convertible and some debris, the crew discovered that they had excellent access to the heavily customized 1984 PPG Pace Car so they hooked the crane cables up to the wheels and lifted the 5th car out of the sinkhole.

Sadly, the extraction of the 1984 Corvette PPG Pace Car didn’t come with such jubilation as the first four cars brought out of the hole as the metallic orange pace car had nearly been cut in two. When the team got to the 1984 Pace Car, it was upside down with much of the rear end buried in dirt and debris. It was in a position where the crew was concerned about the rock around it crumbling and doing even more damage so they made the call to hook it up and pull it out of the dirt. Unfortunately, once the car was pulled from the dirt the cameras painted a very, very ugly portrait of the PPG Pace Car Corvette. The roof and the vast majority of rear end of the car have been ripped away including portions of the rear chassis and the rear suspension. There is also significant damage to the front and side body work but that pales in comparison to the fact that about 15% of the car is just plain gone.

The prognosis for the first 4 Corvettes pulled from the sinkhole under the National Corvette Museum didn’t appear all that bad. Even the badly beaten up 40th Anniversary Edition Corvette has just faced a bunch of aesthetic damage, but things are obviously much worse for the PPG Pace Car. Repairs on this car will be more of a reconstruction than a restoration, but I have seen much, much worse cars repaired to perfect working order for daily driving. Realistically, this car only needs to be solid enough to drive onto a trailer in Michigan after it is fixed – then back off of the trailer to pull back into the museum in Kentucky.

Hopefully we will have better news from the National Corvette Museum in the coming days and weeks, but considering how bad the first buried car looked when it came out – things are looking grim for the final three Corvettes in the sinkhole.