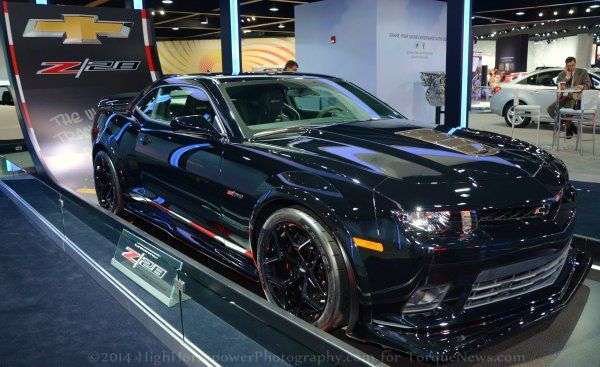 Since the dawn of warranty protection programs in the US auto industry, getting caught racing your car on the track could void any warranty, but that wont be the case with the 2014 Chevrolet Camaro Z/28. Back in the day, dealerships would send “scouts” to local drag strips and road courses to look for new vehicles which could come back to the dealership for repairs of damages which occurring during racing. Most warranties specifically state that any competitive driving (read: racing) can void any or all warranties even if the problem didn’t occur during a race. Because of that, guys back then would take their plates off and cover the VIN of their vehicle to prevent any record being made of the car or truck racing.

There are still rumors of scouts visiting tracks and because of that, many people who race new vehicles will still mask identifying numbers on the vehicle, but that isn’t something that Camaro Z/28 owners will need to worry about when they head to the track.

The 2014 Chevrolet Camaro Z/28 is street legal, but that is really more of a technicality than anything. General Motors doesn’t plan on these cars spending much time as daily drivers, but the automaker does plan on seeing these cars at race tracks all over the country…if not all over the world. Some automakers might sell a car that is built for track use with a warranty that states that any racing activities can void drivetrain warranties. If you were to take something like a Toyota Corolla to the track and the motor blows while racing, telling the dealership that you blew the engine while racing would almost guarantee that they wouldn’t be fixing the engine under warranty.

Should new Z/28 owners blow their LS7 V8 engine on the track, the incredible warranty will still cover the repairs or replacement.

Now, I have not seen the full details of the 2014 Chevrolet Camaro Z/28 warranty outside of the fact that it is good for 5 years and 100,000 miles, and track use does fall under the terms of coverage (which is absolutely remarkable). However, I would bet that there is some fine print in the legal terms of the warranty coverage that protects General Motors from having to replace an engine every week because the only is simply abusing the car. I would also imagine that the Z/28 warranty will be subject to the same modification rules as other performance cars so buying a Z/28 and, say, putting a supercharger on it could void the engine warranty.

Still, anyone looking to buy a new Camaro Z/28 to go racing in the stock class will be able to rest at night knowing that their track toy is covered for 5 years and for100,000 miles… although I would be surprised to see many new Z/28s hitting 100,000 miles before the 5 years have ended.