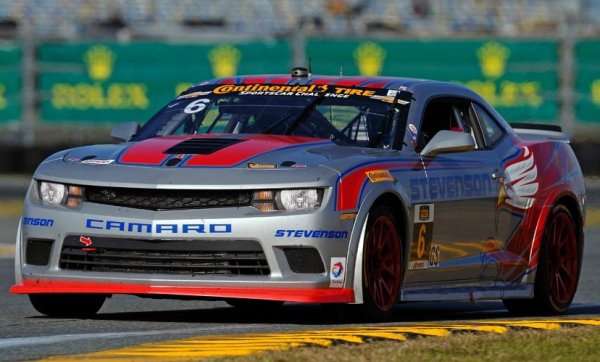 It has taken the new Chevrolet Camaro Z/28.R race car just two tries to score its first win – with the Stevenson Motorsports Z/28.R piloted by Robin Liddell and Andrew Davis winning the warm-up race ahead of the 12 Hours of Sebring.
Advertisement

Like the Chevrolet Corvette C7R, the new Chevrolet Camaro Z/28.R made its on track debut at Daytona International Speedway and, like the Corvette, the new Camaro race car saw its chances of victory dashed by mechanical issues. The #6 Stevenson Motorsports Camaro Z/28.R was one of the quicker cars in the GS class at Daytona before the rear differential failed late in the race. At the Sebring race, the #6 Camaro was once again one of the fastest cars in the field throughout the course of the race, but without any mechanical issues, Robin Liddell and Andrew were able to drive the new Z/28.R Camaro to its first win.

All three of the new Chevrolet Camaro Z/28.R race cars in the Continental Tire SportsCar Challenge at Sebring International Speedway qualified in the top 5, with the #01 CKS Autosport Camaro in 2nd and the Stevenson Motorsports team cars starting in 4th and 5th. After starting in the 5th spot, the #6 Camaro Z/28.R team of Liddell and Davis asserted themselves as one of the fastest in the field, spending much of the 2.5 hour race around the front of the field. Davis spent the first half of the race in the top three and when Liddell took over in the caution-riddled second half of the race, the Scottish racer gradually worked his way up from 3rd to 1st.

Liddell put the #6 Camaro into the top spot with about 30 minutes left in the race and he never looked back – expect when he was checking to see how far back the 2nd place car in the GS field was in the final minutes of the race.

Fortunately for Stevenson Motorsports, there was not race to the checked flag as a major crash late in the race forced the field to finish under yellow and with the #6 Camaro out front – the new Z/28.R race car got its first win.

In the early portions of the race, while the two Stevenson Camaro Z/28.R teams worked to stay in the hunt, the #46 BMW M3 driven by Trent Hindman and John Edwards (who held the pole position for the race) looked to be unstoppable, leading 41 of the first 42 laps. However, the two big wrecks in the second half of the race bunched the field up and on a restart with about 31 minutes remaining in the race, Liddell was able to box the BMW in behind slower traffic to take the class lead. When a second massive crash caused another caution a short time later, Liddell’s move around the BMW had proven to be a race winning maneuver.

Late in the race, the other two Camaro Z/28.R race cars in the field – the #9 Stevenson Motors car and the #01 CKS Autosport car – were battling for position when that final big wreck occurred. The CKS car was knocked out of the race, forcing them to settle for a disappointing 19th place GS class finished, 43rd overall. The #9 Stevenson Camaro was also involved in the late race crash, but he was able to salvage a respectable 8th place (class and overall) finish.

The Camaro Z/28.R teams and the rest of the Continental Tire SportsCar Challenge will be back in action on May 2-3 as they take on the Mazda Laguna Seca Raceway for the third race of their season.