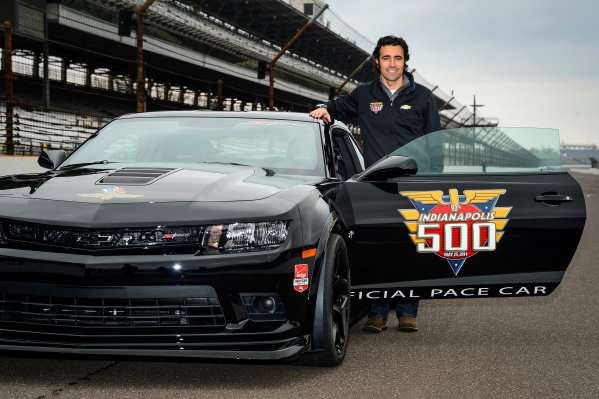 General Motors has announced that the 2014 Indianapolis 500 will be paced by a 2014 Chevrolet Camaro Z/28 driven by three time Indy 500 winner Dario Franchitti – marking the 8th time that a Camaro has led the field to the green flag and the 25th time that a Chevrolet product has been the official pace car of the fabled American race.
Advertisement

2014 marks the 98th running of the Indianapolis 500 and for the 48th time in the past 98 years, a General Motors product will lead the field to green with the fastest Camaro ever – the 2014 Chevrolet Camaro Z/28 – serving as the newest Indy 500 pace car. Driving that car to the first green flag of the race is retired IndyCar racer Dario Franchitti, who won the Indy 500 in 2007, 2010 and 2012 along with winning 4 championship titles during his racing career.

“Dario is a true champion who has earned the respect of competitors and race fans alike,” said Jim Campbell, Chevrolet U.S. vice president of performance vehicles and motorsports. “It will be very special to have Dario lead the field to the green flag in the Camaro Z/28 at Indianapolis Motor Speedway.”

It has almost become expected at this point to see a General Motors car pacing the field at the Indy 500 as you have to go back to 1996 to find a year when something other than a GM product leading the field to green (a Dodge Viper was the 1996 pace car). Since then, the only vehicles to pace the Indy 500 field were Corvettes, Camaros, a Chevy Monte Carlo, a Chevy HHR sport truck, the Oldsmobile Aurora and – most oddly – the Oldsmobile Bravada (aka a Chevy Trailblazer) in 2001. In the past 98 years, the Chevrolet brand has become the most common pace car with the Corvette serving as the pace car 12 times, the Camaro is second with 8 appearances and the SSR, Monte Carlo, Beretta, Bel Air and Fleetmaster Six combine for a total of 25 Chevy pace cars in the history of the famous IndyCar race.

“It is a tremendous honor for me to be asked to drive the Pace Car for the Indianapolis 500. As a historian of motorsport and as a three-time winner of this great race, I will appreciate every minute of getting to pace the field in the new 2014 Chevrolet Camaro Z/28,” said Dario Franchitti. “Although I won't be competing in the Greatest Spectacle in Racing, this will be as close as one person can get to the action. I can't wait until May in Indianapolis.”

The 2013 Indy 500 Pace Car was the new 2013 Chevrolet Corvette Stingray with NFL Hall of Fame quarterback Jim Harbaugh at the wheel (for parade purposes and the start of the race) while Food Network star and hardcore GM fan Guy Fieri drove the 2012 Chevrolet Corvette ZR1 Pace Car for the 2012 running of the race. Although some folks expected to see the Corvette Convertible or maybe even the 2015 Corvette Z06 leading the 2014 Indy 500 field, it makes good sense for the most track capable Camaro of all time to lead one of the best known American motorsport events.

The only downside to using the 2014 Chevrolet Camaro Z/28 as the official Indy 500 Pace Car is that we arent likely to see a special pace car package for the new Z/28. When General Motors has used higher volume models for the Indy 500 pace car in the past – like the 2011 Camaro Convertible, the 2010 Camaro SS Coupe, the 1998 Corvette Convertible or the 1990 Chevy Beretta – it has spawned a new collectable package for enthusiasts to order and go after years later. Even across other brands, Indy 500 Pace Car Editions have become popular collector’s items but with the high priced and low production 2014 Camaro Z/28 – we are far less likely to see many people rocking the 2014 Indy 500 Pace Car look on your local car show.