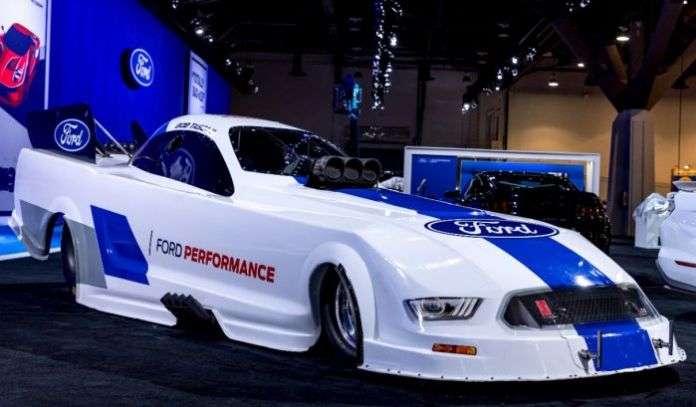 Ford Performance will assist with the development of a new Ford Mustang funny car for the 2018 NHRA season, marking the return of Ford’s factory-backed drag racing program with driver Bob Tasca III at the wheel.
Advertisement

Ford Motor Company officially pulled out of the NHRA when they ended their factory support after the 2014 season, leaving those teams in the Ford Mustang looking for new rides for 2015. Most notably, John Force Racing was forced to switch from the Ford Mustang to the Chevrolet Camaro when the Motor Company pulled their financial support, but Chevrolet was happy to score a team of John Force Racing’s caliber.

Since then, there have been a few Ford Mustangs in the NHRA Funny Car class, but those drivers have attempted to compete without factory backing. Meanwhile, Dodge, Chevrolet and Toyota drivers (mostly) have OEM support and with more money, comes more success. John Force Racing’s Camaros and Don Schumacher Racing’s Dodge Chargers have dominated the Ford (and Toyota) teams, but the Motor Company is looking to change that in 2018.

At the ongoing SEMA Show in Las Vegas, Ford Performance introduced the new Ford Mustang funny car, which is loosely modeled after the look of the Shelby GT350. This car will be campaigned by Bob Tasca III next season and Ford’s involvement should go a long way in helping Tasca Racing compete with the Chevy and Dodge teams.

“We’re excited about partnering with Tasca Racing and helping them return to NHRA for a championship run,” said Dave Pericak, global director, Ford Performance. “We believe we have the technology tools to help the team be competitive on the track long-term, and are looking forward to the effort starting in 2018. The Tasca family has always been a pioneer in racing, and a leader in Ford vehicle and parts sales for many decades. This partnership will only serve to strengthen that legacy.”

The 2018 Ford Mustang Funny Car
Tasca Racing teamed up with Ford Performance to design the 2018 Ford Mustang funny car body, which should offer superior aerodynamics when compared to the Mustang body currently in use by the privateer teams. Ford may also have some involvement in the engine development program, but there has been no mention of that aspect of the new race car.

“This is a very exciting day for me personally, and for everyone involved at Tasca Racing. We have always been a Ford family and have a long history with drag racing, so to be able to return to NHRA Funny Car full-time in 2018 with the support of our long-time friends at Ford is the perfect scenario for us,” said Bob Tasca III. “This is something we have been working on for months now, so it’s great to be able to finally talk about it. We are ramping up for a full-season effort on the track, but also are ready to start working with our Ford partners to help reach their business goals and to help recruit technicians and mechanics for Ford dealerships by leveraging the NHRA platform. My team is focused on winning a Championship for all the Ford fans that have supported Tasca and Ford since the 1960’s! My grandfather coined the phrase ‘Win on Sunday, Sell on Monday.’ That statement is alive and well within the NHRA. We can’t wait to get started.”

While the sponsorship and vehicle development program with Ford Motor Company will most certainly improve Bob Tasca III’s chances of bringing home some wins next season, it is going to be a tough battle with the Chevrolet Camaro drivers from John Force Racing and the Dodge Charger drivers from Don Schumacher Racing. Dodge and Chevy have long been the leaders in the funny car ranks, so Ford will have to really do their homework to knock off the current frontrunners.

dan root wrote on February 14, 2018 - 10:33pm Permalink
i am so happy to read this.ford belong's in the nhra.it's been boring especially since i don't watch much because i do not like chevy or dodge.true blue dyed in the wool ford fan since i was a kid.i hoped that someday i'd read this story and now glad i finally did.next stop john force please!
lawrence boley wrote on March 28, 2018 - 7:41pm Permalink
It about time for Ford to do this.
Richard Herget wrote on April 22, 2018 - 6:32pm Permalink
I LOVE NHRA but HATE it without FORD!! Now I can really enjoy Sundays again!

LG's New EV Battery Plant Is a Welcome News for Tesla
Tesla Giga Berlin's New Hurdle: It's Not Only the Gov't, but Now Tesla Itself
END_OF_DOCUMENT_TOKEN_TO_BE_REPLACED