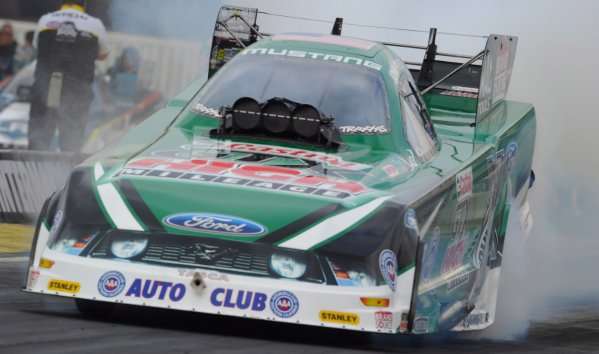 Ford Racing has announced that they will cease any factory backing of the highest levels of the NHRA drag racing series after 2014 – leaving Pro Stock and Funny Car drivers in the Mello Yello Drag Racing Series searching for new manufacturer’s sponsorships for the 2015 season.
Advertisement

In the current world of professional motorsports, no automaker is  more successful than Ford and in the NHRA Mello Yello Drag Racing Series, Ford Racing sponsors the most famous and most successful name in drag racing history – Mr. John Force.  Since switching from Oldsmobile to Ford in 1997, Force has won 9 Funny Car championships in 17 years while the John Force Racing team has also won almost half of the races during that same period of time.  John Force is joined by an impressive list of other very competitive drivers who have driven a Mustang Funny Car over the past 17 years including former champion (2009) Robert Hight.  Tony Pedregon, while driving a Ford for John Force Racing, also won a championship in 2003 so in the 17 years since Ford Racing joined the NHRA, they have taken home a total of 11 championships.

However, we know all too well that true “success” for an automaker in the world of motorsports has far more with making money than it does winning championships and over the past few years, the NHRA has become less and less of a money making venture.  Jamie Allison, Director of Ford Racing, had this to say to Autoweek:

“We made a business decision as we evaluated the Pro/Nitro level in the sport this past year, reviewing our investment, the returns from activation, television ratings and overall product/technology relevancy.  It is vital that we align our motorsports at Ford to closely match our global products, technologies and customer outreach, especially in this ever-changing automotive world.”

In other words, Ford isn’t seeing enough financial return from the world of drag racing to continue putting money into the highest levels of the sport.  This may seem like a confusing message, considering that a high number of Ford Mustang owners who participate in their own form of motorsports are drag racers while the odds are very good that almost none of them do any circle track racing in their Mustang – and we can bet that Ford doesn’t plan to leave NASCAR any time soon.  Then again, NASCAR has big money behind it and in that end…that is all that really matters to all of the companies writing sponsorship checks.

Fortunately for those teams (like John Force Racing) who rely on Ford’s factory backing, they have the duration of this season and the entirety of the 2014 season to work on a new plan.  For John Force, he is considering the jump to the Top Fuel classes where vehicles are unbranded (as far as the average consumer is concerned) or he could stay in Funny Car with backing from another manufacturer.  Unfortunately for both the drivers and the fans, Ford’s departure leaves only Toyota and Dodge involved with the NHRA from a financial support angle so if Force wants factory backing for 2015 – he will either be driving a Camry or a Charger.  Considering the massive success of the current Dodge Funny Car program, that would seemingly be the better choice for John Force Racing but Toyota could use their deep pockets to snatch up one of the biggest names in the history of drag racing.

Ford has announced that they will continue their support of “lower level” sportsman drag racing efforts so rather than invest their money in the portion of the sport that has some fan base and some television coverage – they are going to put that money into drivers that no one outside of the sport has ever heard of because they receive absolutely no television coverage.  However, we should keep in mind that the money spent on sportsman drag racing results in other racers buying cars like the Ford Racing Cobra Jet Mustang to compete in the sport while there is no way for people to go to Ford Racing to buy the Mustang Funny Car.  Money talks and sadly – it has convinced Ford to turn its back on professional drag racing.