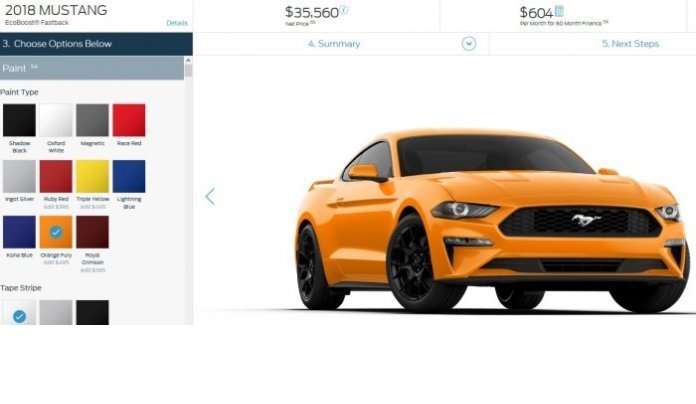 The 2018 Ford Mustang EcoBoost Fastback gets more torque and a lower starting price than the 2017 EcoBoost Mustang, but today we take a look at how much it will cost to drive away in a new turbocharged pony car with the features that provide the most performance bang for your buck.
Advertisement

We brought you the news a few weeks back that the 2018 Ford Mustang with the 2.3L EcoBoost 4-cylinder delivers the same 310 horsepower as the 2017 models, but the torque output climbs to 350 – up 30lb-ft from the current models. That was followed by the news that the 2018 EcoBoost Mustang Fastback costs $610 less than the 2017 EcoBoost Mustang Fastback, but those numbers are based on the entry-level pricing. That doesn’t include the various options that many EcoBoost Mustang owners are going to want, but today, we bring you a look at how much the turbocharged Mustang will cost when you add on the essentials needed to get the best possible performance.

The odds are good that the new 10-speed automatic transmission will yield the greatest performance, so for $1,595, I would add that and in order to get the Selectable Drive Mode system, I would add the 101A Equipment Group for $2,000 – leading to a price of $30,575.

Next, I would most certainly want the MagneRide suspension system, but you can only get that if you add the EcoBoost Performance Package as well, and adding the suspension with the performance package adds a total of $4,190 to the bottom line – increase the price of my ideal EcoBoost Mustang to $34,675. The good news here is that in addition to the MagneRide system, the EcoBoost Performance Package adds bigger brakes, a better cooling system, 19 inch wheels wrapped in performance tires, unique chassis tuning and some other goodies – so in adding these two options, you get a substantial improvement in overall performance.

Finally, the only other option that I would consider for my ideal 2018 Ford Mustang EcoBoost Fastback is the navigation system, which adds $795, for a total MSRP of $35,560. That price includes all of the options available to get the best performance out of the 2018 EcoBoost Mustang, so for under $36k, you can have the most performance possible from the stock turbocharged 4-cylinder pony car.

For those who want the leather seats and the other standard features of the EcoBoost Premium Fastback, adding the same options which I selected with the exception of the 101A Equipment Group can expect to pay around $38,575 – so the “Premium” EcoBoost Mustang with similar levels of performance costs about $3k more.

Click here for a look at the pricing of the 2018 Ford Mustang.

LG's New EV Battery Plant Is a Welcome News for Tesla
Tesla Giga Berlin's New Hurdle: It's Not Only the Gov't, but Now Tesla Itself
END_OF_DOCUMENT_TOKEN_TO_BE_REPLACED