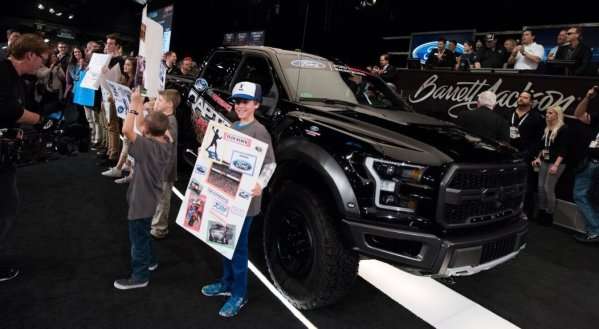 The final 2017 Ford F150 Raptor built for this model year was auctioned off last week at the Barrett Jackson Auto Auction in Scottsdale, Arizona, and when the final gavel sounded – the last new Raptor built raised a whopping $207,000 for the Juvenile Diabetes Research Foundation.
Advertisement

A few weeks back, Ford Motor Company announced that they would be sending a unique 2017 F150 Raptor to the Barrett Jackson Scottsdale auction and the proceeds of the sale would go to benefit the Juvenile Diabetes Research Foundation. That auction took place last week and this unique 2017 Raptor sold for more than double the MSRP, with an additional contribution raising the final proceeds to $207,000.

The Final 2017 Raptor
While Barrett Jackson typically auctions off the very first example of a high profile performance vehicle, Ford Motor Company opted to go with the very last example of the 2017 F150 Raptor for this fundraising effort. To make this final Raptor more unique, the owner will get to select a unique one-off color for their Raptor, so in addition to be a loaded 2017 Raptor and the final 2017 F150 built in Raptor trim, it will also be the only Raptor painted this unique color (which will be chosen by the winning bidder).

“The new 2017 Ford F-150 Raptor is by far the most off-road-capable vehicle on the market today, boasting some of the best performance technology to come from Ford,” said Jim Owens, marketing manager, Ford Performance. “Raptor serves as a testament to our passion for creating vehicles that are designed to tackle the toughest obstacles on earth. We’re really looking forward to auctioning off our custom creation to help support JDRF.”

Of course, in addition to the premium amenities and the unique color, the 2017 Ford Raptor sold at the Barrett Jackson auction was fitted with the standard 3.5L EcoBoost with 450hp and 510lb-ft of torque, the new advanced four wheel drive system, the Raptor-specific performance suspension setup and the new 10-speed automatic transmission.

The 2017 Raptor is effectively the best-performance F150 ever, and the truck auctioned off last week is the last of the 2017 models.

The Auction for JDRF
When the final 2017 Ford F150 Raptor rolled onto the Barrett Jackson auction block with a host of children gathered around it, the bidding was hot and heavy. The price quickly climbed past base price of the new Raptor and well into the six-figure range, closing at an impressive $157,000. The winning bidder was Sam Pack, CEO of Sam Pack Five Star Ford of Carrollton, Texas, who will get to pick the unique color of his Raptor before taking delivery. I imagine that it will likely serve as a great showpiece at his dealership.

After the action had ended, there was also an anonymous donation of $50,000 on top of the winning bid, so at the end of the day, the final 2017 F150 Raptor raised $207,000 for Juvenile Diabetes Research Foundation.

“Providing support to JDRF in its fight against diabetes is extremely important to my family and everyone at Ford Motor Company,” said Henry Ford III, global marketing manager, Ford Performance. “The auction of this one-of-a-kind Raptor is a true testament to Ford’s commitment to JDRF and a great way to raise awareness for this extremely worthy cause. We’re thrilled that the winning bidder chose to support such a wonderful organization. I’m confident this truly unique Raptor will put a smile on their face every time they get behind the wheel.”

Ford first began working with the Juvenile Diabetes Research Foundation back in 1983 and since then, the Motor Company has raised more than $8 million for the children’s charity.