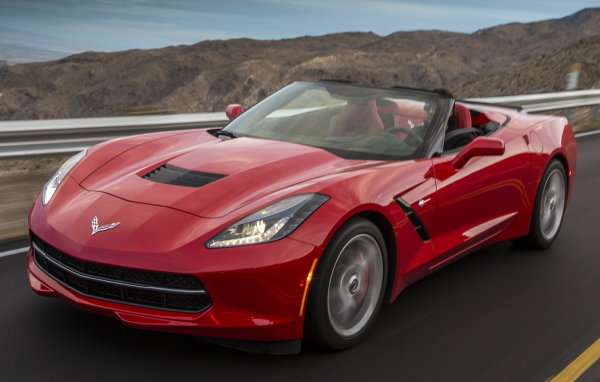 The C7 Chevrolet Corvette Stingray continued its string of strong sales months in July 2014, moving enough units to destroy the Dodge Viper along with beating all of the Porsche sports cars – Combined.
Advertisement

While the Chevrolet Camaro, Ford Mustang and Dodge Challenger are technically the bestselling sports cars in America, the Chevrolet Corvette Stingray is by far the bestselling premium performance car and the bestselling true sports car in America by a massive margin. If you exclude the three muscle cars, there is no sports car sold in America that rivals the current sales figures of the C7 Stingray. In fact, you could add up the sales figures of most of the true competitors for the Corvette and you would still have a smaller number than what we have been seeing – and continue to see – from the 2014 and 2015 Corvette Stingray fastback and convertible.

Corvette Clubs the Competition in July
The biggest competitors for the Chevrolet Corvette Stingray are the Porsche Boxster/Cayman (in price), the Porsche 911 (in performance) and the Dodge Viper – which really only compared due to the fact that it is American, although it is far more powerful and way more expensive. In July 2014, General Motors sold 3,060 examples of the new Corvette Stingray fastback and convertible. Porsche sold 559 Cayman or Boxter models and 849 examples of the various 911 models. When you add in the 391 Panamera sedans sold and the 3 918 hybrid supercars delivered around the US, the Porsche brand sold 1,802 cars in July 2014 so the Corvette Stingray handed a sales beatin’ to Porsche’s entire sports car lineup.

As for homeland competition, Dodge sold 46 Vipers in July, reaching 400 units for the year. GM probably sold that many Corvettes in the first week of the month but again, the Viper and Corvette aren’t quite a direct comparison with the Viper starting around $104,000 while the Corvette starts in the $55k range. Even the fully loaded Corvette Z51 3LT costs some $35,000 less than the “base” Viper so it is unrealistic to think that the Viper will ever sell 3,000 units in a month, but with the Viper and the Corvette being the two key premium sports cars in America; we have to mention the lackluster Viper sales relative to the booming Corvette sales.

The Strong Year Continues
July 2014 was just the latest in a long string of strong sales months for the C7 Chevrolet Corvette Stingray. Although there were plenty of traditionalist Corvette fans who insisted that the new look of the C7 was sure to fail, Corvette sales are through the roof, selling as many cars every month as Chrysler had hoped to sell Vipers in an entire year. GM has sold 20,804 Corvettes this year, putting them on pace to sell over 35,000 units in 2014. While the styling might not be everyone’s cup of tea, this new Corvette is the most powerful “base” Corvette of all time, the most efficient Corvette of all time and thanks to the incredible body and chassis design – the “base” Corvette is able to compete with far more powerful and far more expensive cars…like the Dodge Viper. Add into those incredible claims the cutting edge design that most people love and it is no question why the C7 Corvette Stingray is selling better than almost every other true sports car in American – combined.

We can expect to see Corvette Stingray sales numbers climb as the 2015 models arrive in full force. In addition to all of the aspects of the 2014 that make the C7 so great, the 2015 models gain the new 8-speed automatic transmission for improved performance and drivability. The self shifting 2014 Corvette Stingray is very good, but the 8-speed gearbox that was initially designed for the Z06 makes it even better…and that should contribute to the 2015 sales numbers.