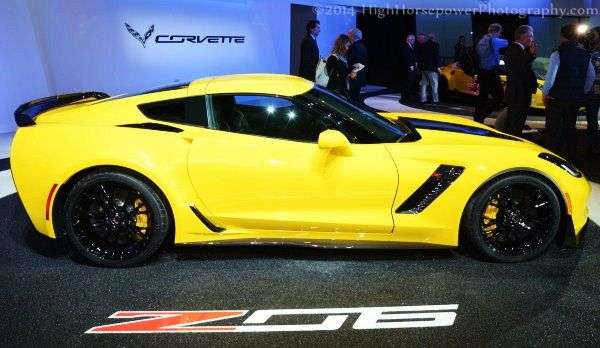 Earlier this week we brought you the news of the 2015 Chevrolet Corvette Stingray getting a few new appearance packages and today, we have an idea as to when those first 2015 models can be ordered and when they will begin arriving in showrooms around the country.
Advertisement

General Motors has been surprisingly hush-hush about the Chevrolet Corvette for the 2015 model year aside from the introduction of the new Corvette Z06 and the fact that the Stingray will be getting the same 8-speed automatic transmission as the mighty Z06. Thanks to a leaked order guide, we learned earlier this week that along with the new 8-speed automatic transmission, the 2015 Corvette Stingray will also be getting a new ZF1 appearance package, a carbon fiber ground effects package, some new wheel choices, two new colors and a handful of other small additions like unique badges, protective paint film and special valve stems.

The new 8-speed automatic transmission will almost certainly make the 2015 Corvette Stingray with the self-shifting gearbox more efficient while likely affording it better performance. With that in mind, there are plenty of prospective Corvette buyers around the country who want to know when they can place their order and/or go to the dealership to buy a 2015 Stingray and thanks to the folks at Edmunds Inside Line, we have our first schedule for the new model year of the C7.

According to Edmunds, the order banks for the 2015 Chevrolet Corvette Stingray fastback and convertible will open sometime in July. Around that same time, we should get a full spread of pricing for the 2015 model year Corvette which - according to Chevrolet spokesperson Monte Doran – won’t change all that much for the 2015 models. The base price of the 2014 Corvette Stingray fastback is $53,995 and that includes the $995 destination fee. We would expect that there will be at least some price hike for the new 8-speed automatic transmission, but with few other changes to the base Stingray, the price of those 2015 Corvettes with the 7-speed manual could remain very near the price of the 2014 models. Keep in mind, almost all of the new features for the 2015 Corvette are optional items from the appearance packages to the new 8-speed automatic transmission, so the base price may not change much at all for the new model year.

As an interesting note, Edmunds also reported that the leaked order guide information was not the official order guide. That information was evidently a preliminary copy so while it is likely that much of it is accurate, there could be some changes when the order guide actually drops later this year.

General Motors plans to begin deliveries of the 2015 Corvette Stingray in September with the Z06 models arriving early in 2015. Considering the massive amount of demand, anyone who wants to make sure that they get a 2015 Corvette in a timely fashion should probably start talking to their local Chevy dealership as soon as possible.