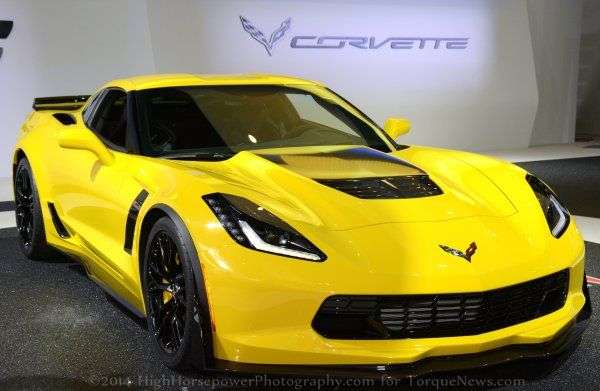 General Motors has dropped all of the details on the 2015 Chevrolet Corvette Stingray, including the new 8-speed automatic transmission that we knew was coming along with a couple new exterior colors and some new exterior appearance package options – all of which should only help improve the already incredible C7 Corvette.
Advertisement

First off – and most importantly – the 2015 Chevrolet Corvette Stingray will benefit from a new 8-speed automatic transmission that will also be offered in the new 2015 Corvette Z06. This new 8-speed gearbox should make the self-shifting Corvettes faster by allowing for more aggressive low end gearing while the numerically higher gears should make the 2015 Corvette Stingray even more fuel friendly. This transmission will almost surely make the 2015 Corvette Stingray the fastest self-shifting “base” model Corvette of all time while also likely being the most fuel efficient Corvette ever. That’s pretty impressive. Those base 2015 Stingrays that have the new 8-speed automatic will also come with a standard limited slip rear differential and a 2.41 gear set. The 6-speed automatic from the 2014 Stingray is no longer available, nor is the 2.56 gear set that accompanied that automatic gearbox for the introduction of the C7 Corvette.

Next up, those folks who want their 2015 Chevrolet Corvette Stingray to look a little more aggressive on the outside will be happy to hear about a couple new appearance packages. The first new option is the ZF1 Appearance package, which adds the body colored spoiler and the split spoke rims of the Z51 package. Next is a new Carbon Fiber Ground Effects Package that includes a front splitter, side sills and a unique rear spoiler – all of which are made out of carbon fiber. Finally, there are some stand alone options new for the 2015 Corvette such as black and silver valve stems, Carbon Flash badges, chrome badges, clear protective paint film, carbon fiber tonneau inserts for the Stingray Convertible and the Performance Data Recorder. Of course, there are also the Pacific and Atlantic packages that we talked about last month and you can click here for more on those special edition packages.

The 2015 Chevrolet Corvette Stingray will have two new color options – Shark Gray Metallic which is a “free” option and Daytona Sunrise Orange Metallic which will come with an upcharge. On the other hand, those prospective buyers hoping to get a 2015 Corvette in Lime Rock Green Metallic or Cyber Gray Metallic are out of luck, as those hues have been deleted for the new model year. Unfortunately, no images of these new colors have been offered up…nor have any pictures of the 2015 Corvette Stingray at all. As you probably noticed, the car shown at the top of this piece is the new 2015 Corvette Z06.

Finally, as an interesting note, the Performance Exhaust system that adds 5 horsepower, 5lb-ft of torque and a throatier sound for the Corvette Stingray is now included as part of the Z51 package. This exhaust system was not part of the package for 2013, instead being offered only as a standalone option, but for the new model year it will be available on non-Z51 Corvettes and standard on those with the Z51 package.

Pricing for the 2015 Chevrolet Corvette is not available on the Chevrolet website yet, but as soon as the prices for the new model year arrive – you can be sure to find them here on TorqueNews.com.

Mr. Kevin Richards wrote on May 28, 2014 - 6:24pm Permalink
I'm primarily interested in the New Corvette 2015. Just as soon as I can afford too buy one.The Spec's love the new color What an over all Great Job.
Larry Klein wrote on June 2, 2014 - 3:40pm Permalink
I'm waiting to order a 2015 and would like to see specs and pricing to see what the dual mode exhaust system does when included in the Z51 package. Also interested in the new orange that is being offered in 2015.

LG's New EV Battery Plant Is a Welcome News for Tesla
Tesla Giga Berlin's New Hurdle: It's Not Only the Gov't, but Now Tesla Itself
END_OF_DOCUMENT_TOKEN_TO_BE_REPLACED