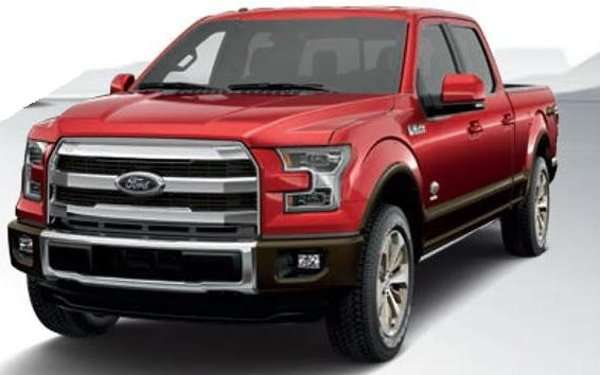 The 2015 Ford F150 will come in five different trimlines at launch and while the pinnacle of half ton luxury comes with the Platinum package, those folks who want a luxurious F150 with more customization options can opt for the 2015 King Ranch package – which comes with a set of appearance packages that change the look of the exterior.
Advertisement

The 2015 Ford F150 King Ranch package follows in the tradition of past King Ranch models, offering premium luxury with a Western theme. Where the F150 Platinum offers a sort of “black tuxedo” upscale luxury truck feel, the King Ranch has more of a pricey cowboy boots and bolo tie luxury feel. The F150 Platinum is what your lawyer drives to go hunting – the King Ranch is what your daughter’s overpriced horse trainer drives to and from the stable. When we get a full look at the interior of every package, we can expect to see a spread of upscale stitching and maybe even some saddle inspired cues, but today we bring you a closer look at the exterior design of the 2015 F150 King Ranch.

2015 Ford F150 King Ranch
As was the case with the 2014 models, the 2015 Ford F150 King Ranch will come in a single standard, heavily loaded form without any popular equipment groups, much like the F150 Platinum. The XL, XLT and Lariat models will likely all have 101A, 102A, 201A, 202A packages that add groups of features – but the King Ranch may only be offered in standard 401A form (shown above). The unique features of the 2015 F150 King Ranch begin up front, where this model wears a unique three bar grille with solid chrome bars, a chrome surround and a Caribou (dark brown) grille mesh inserts. The front bumper is also painted Caribou with a chrome insert in the middle and those folks who buy a four wheel drive 2015 F150 King Ranch will get black tow hooks.

Along the sides, the King Ranch package wears body colored mirror caps, body colored door handles, Caribou wheel lip moldings, power running boards that swing down when the doors open and a set of package specific 20 inch machined aluminum wheels with Light Caribou painted pockets. Also along the sides, the lower portion of the body has been painted Caribou to continue the two-tone theme from the lip moldings and the front and rear bumpers. Out back, the F150 King Ranch sports a tailgate step, a chrome exhaust tip and a Caribou colored rear bumper.

The details for the 2015 F150 King Ranch interior are limited, but expect to see plenty of technology in an upscale environment featuring front bucket seats and a center console with a floor mounted shifter.

2015 F150 King Ranch Chrome
Those who want a little more luxury on the outside of their 2015 Ford F150 King Ranch can add the Chrome Appearance Package (86K). This adds chrome grille mesh in the standard King Ranch chrome grille, fully chromed front and rear bumpers, chrome tow hooks on four wheel drive models, chrome mirror caps, chrome door handles, chrome 20 inch wheels and a satin aluminum tailgate face that is borrowed from the F150 Platinum. This package adds lots of chrome, but it maintains the two tone theme with the Caribou paint along the bottom of the body and on the wheel lip moldings. Click any of the thumbnails above for a closer look at the King Ranch and the 2015 F150 Platinum. For those looking for more information on the XL, XLT and Lariat, stay tuned to TorqueNews.com as we walk you through the look of the entire 2015 F150 lineup.