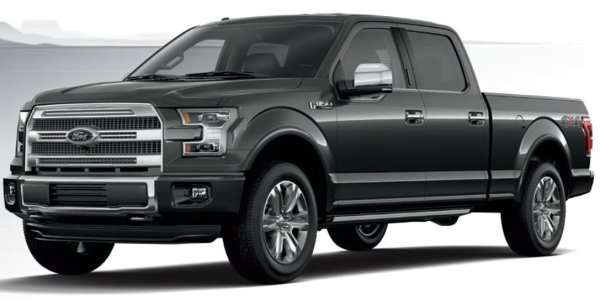 As part of the recently released 2015 Ford F150 Appearance Guide, the Motor Company offered up a couple pictures and a list of standard features for the top of the line Platinum model – giving us our first in-depth look at the premium luxury version of the new F150.
Advertisement

I should start by explaining that the 2015 Ford F150 Appearance Guide differs from a full blown Order Guide, so the details are not all inclusive. This single page in the Appearance Guide doesn’t list every single feature of the 2015 F150 Platinum, but it runs through some of the key points inside and out – focusing on the features which differentiate the Platinum model from the rest of the trimlines offered at launch.

F150 Platinum Means Serious Luxury Inside and Out
The 2015 Ford F150 Platinum is the top of the line package, one that the Motor Company markets as a luxury package…and it’s hard to look at this model as anything but a luxury pickup (even though it can still earn its keep in terms of hauling and towing capacities when properly configured). We can expect that the F150 Platinum will come with every high end and high tech feature both inside and out, and it appears as though the 2015 models will follow the 2014 models with the Platinum package only coming in one form whereas the other trimlines will have preferred equipment packages.

Key aspects of the 2015 Ford F150 Platinum exterior package begin up front, where the designers have added a big, bright Satin finish three bar grille design that features chrome accents, a satin finish surround and bright chrome mesh inserts. The front and rear bumpers are painted to match the color of the vehicle (shown above in Magnetic) with chrome inserts in the front bumper openings to add a little more bling to the face of the F150 Platinum. Those who opt for a four wheel drive 2015 F150 will also get chrome tow hooks to further dress up the front end.

Along the sides, the 2015 Ford F150 Platinum wears chrome mirror caps, chrome door handles in body colored bezels, bright beltline moldings, power running boards that deploy when the door opens, body colored wheel opening moldings and package specific 20 inch polish aluminum wheels. The back end of the F150 Platinum is punctuated with a chrome exhaust tip and a satin aluminum tailgate panel that covers the entire face of the tailgate – creating a very upscale look across the rear of the new F150. On the inside, the 2015 Ford F150 Platinum comes standard with front bucket seats separated by what will likely be a very large, leather covered center console that will serve as the location for the floor shifter. Buyers can pick from two different luxury leather interior packages – Black or Brunello.

The Fewest Options, The Most Features
Unlike the XL, XLT, Lariat and King Ranch models, the 2015 Ford F150 Platinum is not available with the Sport Appearance Package or the Chrome Appearance Package – presumably because the Platinum comes with tons of bling and doesn’t really “work” with a sport package. As mentioned above, there are also no preferred equipment packages for the Platinum package so while buyers of this premium luxury trimline for the 2015 F150 won’t get many chances to customize their new truck – they will still have the most features inside and out.

For those interested in hearing more about the other trimlines of the 2015 Ford F150, stay tuned to TorqueNews.com as we offer up detailed information on the XL, XLT, Lariat and King Ranch over the next few days. In the meantime, check out the links below for more information on the next generation Ford F150.
2015 Ford F150 to Come in 13 Colors, 14 Wheel Options
A Closer Look at the 2015 Ford F150 FX4 Details
Next Gen Ford Super Duty Burns in Public, Melts Like Aluminum
Ford is Eating Aluminum Costs on the New 2015 F150

LG's New EV Battery Plant Is a Welcome News for Tesla
Tesla Giga Berlin's New Hurdle: It's Not Only the Gov't, but Now Tesla Itself
END_OF_DOCUMENT_TOKEN_TO_BE_REPLACED