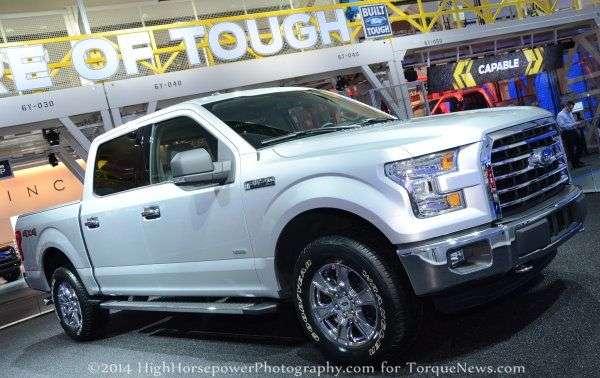 Ford Motor Company is making a big push to allow as much customization as possible with the 2015 F150 with a collection of trimlines and a handful of unique equipment packages, but the biggest level of customization will come in the way of colors and wheel choices – with 13 exterior shades and 14 different wheel designs available for the 2015 model year.
Advertisement

If you flip through the configurator for the current F150, there is a fairly impressive spread of colors which vary a bit by trimline, but when the 2015 Ford F150 arrives later this year, buyers will get a collection of 13 color options that is considerably more extensive than the current models. Also, the various packages and trimlines for the next generation F150 will feature 14 different wheel choices that take the look of the new half ton Ford from your average work truck to a modern sport truck to a high end luxury truck.

13 Exterior Hues
The 2015 Ford F150 will be available in 13 different exterior colors including 9 colors that we have seen before along with 4 new colors. Ford hasn’t stated whether every color is available across every trimline – as some colors might be exclusive to the higher priced models – but the overall spread of hues is pretty impressive. Returning exterior colors for the 2015 Ford F150 include White Platinum Tricoat Metallic, Oxford White, Ingot Silver, Race Red, Ruby Red Tinted Clearcoat Metallic, Green Gem, Blue Flame, Blue Jeans and Tuxedo Black. The four new colors for the 2015 F150 include Bronze Fire, Caribou, Guard and Magnetic. Many of these colors will be offered as part of the base price, but at least a few of them will come with an extra upcharge. Ruby Red currently adds $395 to the bottom line of the 2014 F150 while White Platinum adds $595. I wouldn’t be surprised if Bronze Fire comes with an additional charge, but we won’t know for sure until the full pricing schedules have been released by the Motor Company.

14 Wheel Choices
The 2015 Ford F150 is available in 5 different trimlines – XL, XLT, Lariat, King Ranch and Platinum – with a trio of equipment packages including FX4, Chrome and Sport essentially creating 15 unique looks for the new half ton pickup. Across those 15 exterior layouts, Ford will utilize 14 different wheel choices including three 17 inch wheel options, five 18 inch wheel options and twenty 20 inch wheel options. As you can see in the image below, these wheels vary from a proper work truck look to cutting edge sport truck wheels to intricately designed 20 inch rollers that are fitting of a proper luxury truck like the 2015 F150 King Ranch or Platinum. There are several options in the chart above which I really like and I suspect that many others will like multiple wheel choices as well – which could make for a tough decision when prospective 2015 Ford F150 buyers are trying to decide which trimline and packages they want. Best of all, this broad selection in wheel options covers the entire lineup…meaning that whether you are buying the “base model” F150 XL or the top of the line F150 Platinum, you will be able to customize your truck to meet your tastes.

Offering 13 exterior paint options and 14 wheels choices on the 2015 Ford F150 might seem excessive to some, but I think that it is a brilliant move by Ford.