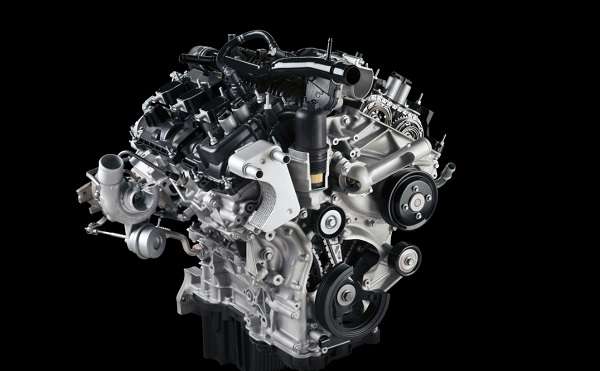 As we approach the launch of the all new aluminum 2015 Ford F-150, experts go on-record predicting the fuel economy numbers the new truck can achieve with the new 2.7-liter EcoBoost. The news is not good for the Tacoma and Frontier.
Advertisement

The 2015 Ford F-150 has not yet been given official fuel economy numbers by Ford. That being the case Torque News reached out to two truck experts to see what they think the best numbers the new full-sized truck will be able to achieve with the new 2.7-liter, 325 horsepower, EcoBoost engine. What they said surprised us. They are sure the new Ford full size truck will top the current offerings by Toyota and Nissan in their compact pickups.

Compact Trucks' Fuel Economy
We are not trying to pick on the Tacoma and Frontier. Rather, we are making the case that Ford has done something bold and is now about leap ahead in fuel economy. The 2014 Toyota Tacoma’s 4-clyinder engine is coincidentally a 2.7-liter engine. The Tacoma with an automatic transmission and its base 4-cylinder in two-wheel drive is rated at 19 MPG City and 24 MPG highway. Frontier’s 2.5 liter 4-cylinder 2WD auto gets just 17/23 MPG. Until recently those numbers did not stick out as bad. Going forward they will. In the past, one reason for opting for a smaller than full size pickup was cost of ownership. Ford’s leap forward in fuel economy will now make smaller trucks cost per mile advantage questionable. Particularly for those that use the trucks for business on leases, or who own under warranty only.

Experts Agree -the Ford F-150 V6 Turbo Will Top Competitor’s 4-Cylinders
Patrick Rall, managing editor of Torque News, says that the F-150 2WD with the V6 EcoBoost 2.7-liter engine will end up with a 27 MPG highway number or greater. He says the real question is whether the Ford EcoBoost gasoline engine will match the Ram’s diesel number of 28 MPG highway.

We also wanted an opinion outside of Torque News, so we reached out to Tim Esterdahl. Tim is an occasional guest writer at TN, but his work is more commonly found at pickuptrucks.com and eBay Motors Blog. Tim is often my go-to guy with truck related fact-checking. Tim guessed 26 MPG for the Ford F-150. He wanted to point out that regardless of the top numbers published; the bigger story is that the “real” trucks, 4WD models with longer beds, will also see big improvements in the coming year. In his words, “The big news is "weight loss" for the large crew cab models. When automakers state their highest fuel economy for a vehicle, it is based on the lightest version. In this case, it will be a High Fuel Efficiency (HFE) truck model which typically is a regular cab, short box with all the fuel saving devices possible.” Tim says we should look deeper at the big sellers and we are likely to see important improvements in the fuel economy of those models. Tim also brought up the stop-start technology Ford is bringing to trucks first. He thinks it will add 1 MPG in real world driving.

Will Colorado and Canyon Beat F-150’s Fuel Economy?
Another interesting truck to speculate about is the new Chevrolet Colorado and GMC Canyon. Will these new smaller than full-size trucks beat the F-150 with the 3.6 liter V6, the Duramax diesel or the 4-cylinder base engine? What is your prediction?

* All existing model fuel economy number according to fueleconomy.gov

DrLou wrote on August 6, 2014 - 5:35pm Permalink
I predict The 2015 Ford F-150 with the 2.7L Ecoboost engine will beat the existing Toyota Tacoma and Nissan Frontier as well as the upcoming 2015 Chevy Colorado and GMC Canyon highway MPG with 4 cylinder engines but I'm not sure it will be able to beat the RAM 1500 with the Ecodiesel engine. Perhaps Ford will be able to match or beat the Ram diesel 28 MPG but I doubt it will be to beat the 2016 Colorado and Canyon diesel highway MPG. We'll have to wait and see what the future brings.
Parks McCants wrote on August 8, 2014 - 4:04pm Permalink
Great read. I'm a little bit more concerned with the durability of the F150 body under real-world work conditions. As to gasoline Vs diesel fuel? On the West Coast, diesel fuel is priced higher than regular grade gasoline. I or 3 mpg will not be the deciding factor. Good job Ford.
Mark Olson wrote on August 20, 2014 - 4:32pm Permalink
It doesn't have to beat the 28mpg of Ram Diesel, if it does 25mpg or better on gas, the price of filling up will be approximately the same. Add to that the cost of maintaining the diesel engine (oil, fuel filters, urea, etc.) and cost of ownership will be less even if the new F150 gets 24mpg. I'm not concerned about the aluminum. It should be as strong as the steel predecessor and the old fully boxed frame is still there. Ford is still the lead engineering department for all truck manufacturers. Ford innovates an others follow.
[email protected] wrote on September 4, 2014 - 8:20am Permalink
The issue that most people ignore is that diesel fuel is 15-25 percent more expensive. So the RAM or GM future mini trucks would need to get up to 33 MPG highway just to be cost competitive with the full size ford. That they can't do by 2016 or sooner.
Brunot wrote on September 26, 2014 - 1:59am Permalink
The 2.7 sounds fine for commuting and light use. Where it may falter is towing, with the turbo in full boost much of the time. The 3.5 ecoboost sure was a disappointment in that area, with sub 10 mpg towing experiences reported. My 5.0 FX4 gets 11.5 towing 3,000 lbs.
Brock wrote on September 27, 2014 - 12:08pm Permalink
Not only do you have to factor in the higher price of diesel, you also have to factor in that diesel engines are going to be options that are priced well above all gasoline engines. You would have to get at least 30% more mpg, and drive the car much longer to be on the winning side of the mpg debate with a diesel. Now pulling power is a different story....
jd scott wrote on January 24, 2015 - 1:50pm Permalink
looking for used 4 cyl 150 pickup, high mileage ok