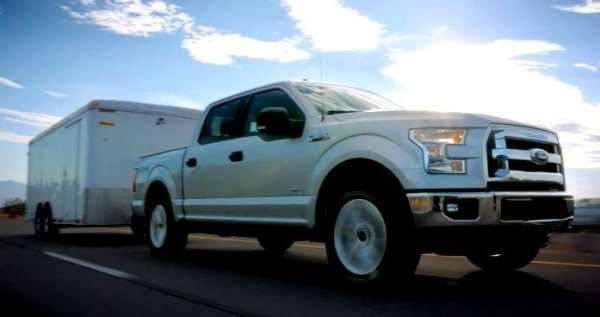 Ford announced back in January that the company would introduce a new 2.7L EcoBoost V6 for the 2015 F150 which caused many skeptics to question whether it would be “enough motor” for the bestselling truck in America, but with the formal announcement of the power figures for the next generation F150 – those skeptics will need to find a new point to critique.
Advertisement

Ford Motor Company has made very good use of its EcoBoost technology and as both the original and the most powerful EcoBoost, the 3.5L twin turbo engine has quickly become the most popular engine choice for new Ford F150 buyers. EcoBoost technology has also made a huge impact across the rest of the Ford lineup including the current Escape, Edge, Explorer, Fiesta, Focus, Fusion, Flex, and Taurus – all of which have become popular models with the various turbocharged engines. Even the mighty Mustang will be getting an EcoBoost engine very soon, with the new 2.3L EcoBoost coming to the 2015 Mustang both in the US and abroad.

With all of that in mind, it is getting harder and harder to question Ford’s integration of EcoBoost technology, but there were some people who wondered if the new 2.7L EcoBoost that will power the 2015 Ford F150 would just be too little to get by. I was not one of those skeptics and I anticipated that the 2.7L EcoBoost would offer somewhere in the area of 315-325 horsepower. Turns out, I was right on the money.

Impressive Power from an Efficient V6
The 2015 Ford F150 powered by the new 2.7L EcoBoost V6 will deliver 325 horsepower and 375lb-ft of torque; figures that fall just short of the 5.0L V8 with 360 horsepower and 380lb-ft of torque. This engine is expected to give these F150s a monster advantage in fuel economy over almost all of the other trucks in the half ton segment – except for perhaps the Ram 150 EcoDiesel. Most importantly, Ford has been able to introduce this small and efficient engine without killing the working abilities of the truck, with the 2.7L V6 affording owners the option to haul 2,250lbs and tow 8,500lbs.

When combined with the weight saving efforts made through the use of aluminum body panels on the 2015 Ford F150, this tiny twin turbo V6 should be able to hang with the vast majority of half ton trucks for the 2015 model year in terms of capabilities while exceeding almost anything else on the market in fuel economy.

The Real Battle Comes with the Ram EcoDiesel
The most efficient truck in the full size, half ton segment right now is the Ram 1500 EcoDiesel, which delivers 20 miles per gallon in the city and 28mpg on the highway. This 3.0L turbo diesel engine offers 240 horsepower and 420lb-ft of torque, allowing it to haul 1,620lbs and tow 9,200lbs so in addition to being the most efficient, it is also as capable as you would expect a truck of this size to be in today’s market. If Ford wants to reclaim the title of offering the most efficient half ton truck in America, they will need to beat the Ram EcoDiesel and this new 2.7L EcoBoost is their best bet.

Prior to the arrival of the EcoDiesel, the Ram 1500 with the Pentastar led the segment in MPGs but before that, it was the 3.5L EcoBoost V6 in the Ford F150. Unlike the Pentastar V6 which bested it in fuel economy, this 3.5L EcoBoost engine is also one of the most powerful in the segment. Ford was able to design their most capable engine to also be their most efficient, so with the emphasis being more on fuel economy with the new 2.7L V6, Ford could take a real run at the top of the MPG chart.

The larger and significantly more powerful 3.5L EcoBoost V6 offers 16mpg around town and 22mpg on the highway, but that is in the current, heavier 2014 F150. Going to the much smaller and slightly less powerful 2.7L EcoBoost should help tack on at least a couple MPGs on both ends while the lightweight 2015 F150 body and chassis design could add a couple more.

Will it be enough for the 2.7L EcoBoost powered 2015 Ford F150 to reach better than 20mpg around town and 28 on the highway? Only time will tell…but if nothing else the arrival of the new EcoBoost V6 with 325hp and 375lb-ft of torque will continue to push all of the truck makers in America to constantly find ways to make more power without compromising efficiency.