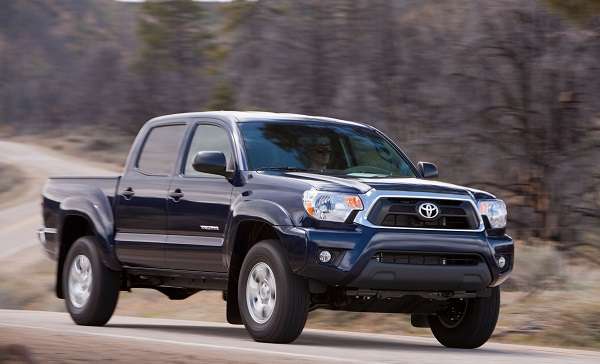 Which future engine would make more sense in a small truck for the US market? A Toyota Tacoma Diesel would have decent torque. A Tacoma Hybrid would have tremendous fuel economy advantages. Is there a wrong answer?
Advertisement

In our recent story we applied our knowledge of the Toyota/Lexus family of drivetrains and speculated on what a Toyota Tacoma Hybrid might be like. Readers liked the idea of a 31 MPG Tacoma. However, many have pointed out to us since the story that a Tacoma diesel might make a lot more sense. Does it? Let’s compare the pluses and minuses of both.

Tacoma Diesel
A Toyota Tacoma diesel is difficult to imagine since Toyota has no diesel engines in the US right now. We could speculate on what a Toyota diesel from another market might do in the US, but as Mazda has recently proven, adapting a diesel from other markets does not yield the same results in our EPA testing. If our Toyota fans will allow it, we’d like to instead look to a proven leader in US diesel vehicles, the Volkswagen Passat for our diesel estimates.

ALSO READ: Can the Toyota Tacoma survive the 2015 Chevy Colorado and 2016 Nissan Frontier?

These estimates are already EPA certified, so we can start from a known point. The Passat has 170 horsepower, but its 1.8 liter, 4-cylinder turbo-diesel delivers good torque at 236 pound-feet. That is much more than the Tacoma Hybrid we imagine and that will be a big part of the advantage for the Tacoma Diesel when we get to that part of our discussion.

Tacoma Diesel Fuel Economy
The 2014 Passat Diesel earns a rating of 34 MPG combined. We are comparing automatics since there would never be a stick-shift hybrid Toyota. Let’s now adjust that as we did previously when we came up with our estimates for the Tacoma Hybrid. First, we need to adjust for weight. The Tacoma weighs roughly 3700 pounds and the Volkswagen Passat weighs 3400 pounds. That is roughly a 9% difference. We will be generous and only apply a 6% penalty to the fuel economy for this. That gives us about 32 MPG. Now, just as we did for the Hybrid in our other analysis, we are going to assess a 15% fuel economy reduction due to the Tacoma’s larger frontal area and overall poorer aerodynamics. That brings us to 27.2 MPG of diesel fuel. Finally, we are comparing 4WD vehicles, so we need to assess a penalty to the Tacoma Diesel for the efficiency losses. Let’s say just 3%. We hit the Tacoma Hybrid with a 10% penalty for 4WD, so we are really still leaning hard to help the diesel. Now we are at 26 MPG.

Finally, we will cross check that logic with a real diesel truck. The 2014 Ram 1500 4WD. That vehicle has a fuel economy of 22 MPG. So our Tacoma, being smaller, and having a smaller diesel engine would be realistic. We think 26 MPG combined is a fair estimate.

Toyota Tacoma Hybrid Advantages
In our prior article we carefully broke down how a 4WD Tacoma Hybrid would be achieve 31 MPG combined. This would be using regular unleaded gasoline. Regular is priced now at about $3.75 in my area. That means that a Tacoma Hybrid would have a cost per mile of about 12 cents. This is exceptional, and there is no truck in the US market that can come close to this.

YOU CAN'T MISS THIS: A 31 MPG 2016 Toyota Tacoma Hybrid 4WD pickup is possible

Our above breakdown yielded 26 MPG for a Tacoma Diesel. That means the Tacoma Diesel would cost 19% more to fuel – if the fuel cost the same. It does not. Diesel costs much more than regular unleaded. At about $4.10 per gallon in my area a 26 MPG diesel vehicle costs 16 cents per mile to fuel. That is fully 25% more than our Tacoma Hybrid. In terms of ownership costs related to fuel the Tacoma Hybrid is the hands-down winner. If you are wondering why in general the US has not adopted more diesels, here is one example of why.

Tacoma Diesel Advantages
The Tacoma Diesel’s greater torque would be a huge advantage in drivability and in terms of usefulness in all things trucky. Towing would be more practical. Light plowing might even be possible. The Tacoma Diesel would be a better “work-truck.” However, is that enough? It still would be a light duty vehicle. 170 horsepower is low for a modern 3700 pound vehicle. Although it could manage more loads, it would not be faster than a Tacoma Hybrid on the road when not loaded, which is how most trucks are driven, most of the time.

Toyota Tacoma Diesel vs. Hybrid Durability, Reliability and Longevity
The Volkswagen thing was just to give us an idea of fuel economy. We are not suggesting Toyota use a VW engine. Assume it is a Toyota engine. We need also to assume this is not a work truck. As I said in my earlier story a stone mason is not buying this vehicle for his business, a homeowner is. That said, we have two points to make.

First, a diesel would be longer lasting. Diesels work for a long time if well maintained and well designed. Advantage- Tacoma Diesel. Second, we need to consider reliability. Toyota warrants its hybrid’s batteries for 100,000 miles and its hybrid cars have proven extremely reliable. In general, hybrids do not suffer a resale value penalty in the actual used car market according to NADA. We call this a tie.

And the Winner Is
The winner of this contest totally depends on your point of view. If you believe in diesels I cannot change your mind. If torque is your primary goal, a diesel cannot be beaten. On the other hand, if fuel economy matters, the Tacoma Hybrid soundly trounces the Tacoma Diesel. If the environment matters, and carbon produced per mile is of concern to you, the diesel would lose. Despite the diesel lobby’s marketing push, diesels generally are the dirtiest vehicles in terms of carbon in their size class after EVs, hybrids, and conventional gasoline engines in that order. Our opinion is Toyota should build both.