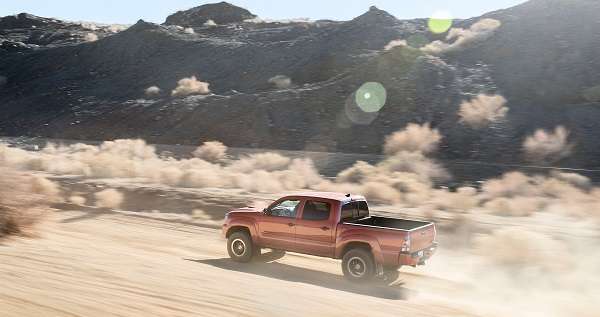 Critics love the 2015 Tacoma TRD Pro Series truck. What Tacoma brings that the Tundra TRD and The 4Runner TRD don’t is affordability.
Advertisement

The 2015 Toyota Tacoma Pro Series will not be Toyota’s most competent off-road vehicle. That would be either the Tundra or the 4Runner, depending on what kind of off-roading you plan to do. However, it will be the company’s best off-road value by far. Since the retirement of the FJ Cruiser (moment of silence please…) this year, the Tacoma has become the brand’s only low to mid-$30K off-road offering. Stepping into a 4Runner TRD or Tundra TRD will cost you about $10K more.

2015 Toyota Tacoma TRD Pro Series Prices
Currently, the 2014 Tacoma 4x4 short bed with the V6, 6-speed manual and the TRD off-road extra value package prices out at only $ 29,780. Expect the TRD Pro series V6 to start just a bit higher and price out in the range of about $33K.

Tacoma Pro Series Gear
Included in that price will be softer springs for the front of the truck that add a 2” lift. These springs have a lower rate and are paired with TRD Bilstein shocks with remote dampers. Up front, the truck will have 1.75 inches of added travel and in the rear 1.5.” The dampers are one of the truck’s most important features. The idea being that yes, the truck will be able to handle more off-road abuse, but the dampers allow that to go on for a while. Tires for the Tacoma will be tough 16” BF Goodrich all-terrain KOs. The exhaust is a cat-back TRD system of stainless steel with dual polished tips. The skid plate up front is standard of course and is made of 1/8” powder coated steel. One example of how the other Toyota trucks are perhaps a little more capable than the Tacoma is that on the 4Runner and Tundra that skid plate is twice as thick. Rounding out the package is a TRD shift knob, TRD floor mats, and a unique throwback “Toyota” badge on the front and TRD badging.

Critics Agree This Truck Rocks
Motor Trend tested the 2015 Tacoma TRD Pro Series alongside its pricier siblings and had nothing but good things to say about the trucks. Our own Aaron Turpen recently tested the 4Runner TRD Pro and said it is “Easily as off-road ready as the 4Runner Trail, which is one of the best off-roaders you can buy as a factory-ready go-there machine.” Car and Driver tested the 2015 Tacoma TRD Pro and said “it is arguably the roughest-and-tumblest compact pickup Toyota has ever offered.” As to how they liked the ride, CD said “we confidently straddle certain obstacles we might otherwise have to steer around in lesser trucks, lest havoc be wreaked on their vital organs. The added wheel travel and the high-capacity shocks let us leap and bound with less risk of bottoming out, and like that of any good Baja-grade truck, the ride actually gets smoother the faster you go.”

Presently, about 40% of Toyota Tacoma trucks sold leave the showroom with some level of TRD equipment. Even more owners then add TRD equipment from Toyota via the parts counter. That will still be possible as Toyota reports that it is planning to continue to offer the parts to shade-tree mechanics, putting the TRD Pro Series level of off-roading within reach of even more enthusiasts on a budget.

Brian McLaughlin wrote on July 26, 2014 - 6:45am Permalink
Hey I'm dying to get my hands on the 2015 Tacoma TRD PRO. I stopped in one of my local Toyota dealers with some questions and the salesman looked at me like I was crazy. He stated they don't even know what it was going to look like...needless to say I just turned around and walked out. I'm hoping you can answer this for me. When do you think the earliest date would be for me to buy one maybe even pre order one?
John Goreham wrote on July 26, 2014 - 10:08am Permalink
September or October would be a safe bet. Good luck
Brian McLaughlin wrote on July 26, 2014 - 4:20pm Permalink
Great thanks John.
Moto man wrote on July 27, 2014 - 6:27pm Permalink
I almost bought a 2014,but then saw the TRD pro and will wait until 2015 or when it comes out. The changes look great!
Shawn McCombe wrote on August 11, 2014 - 4:48pm Permalink
I want to preorder the 2015 TRD Pro 4 Runner. How do i do this, i live in Canada?
John Goreham wrote on August 13, 2014 - 6:24pm Permalink
Hi Shawn. Any information I could get you would only be as good as that which your local (Canadian) Toyota dealer might have. I suggest contacting a sales manager and being patient with him/her. It should be very soon, like weeks.
Nate wrote on September 17, 2014 - 10:33am Permalink
It looks like the TRD PRO package is ONLY available in the USA...... :-(
Max wrote on November 15, 2014 - 4:18pm Permalink
Hello I live in Alberta Canada, and I want to buy a new 2015 tacoma. I've been told by the dealers that Canada will not be getting the TRD PRO series at all. Is this true? Or will I be able to buy one in the fall?
John Goreham wrote on November 17, 2014 - 8:36am Permalink
Let me see what I can find out Max. If I get a yes answer I will make it into a short story, if I get a no I will reply back here. Seems to me the off-road Tacoma is perfect for much of Canada.
Lee wrote on December 6, 2014 - 1:32pm Permalink
Any word on whether Toyota will offer the TRD PRO line up in canada?
John Goreham wrote on December 9, 2014 - 2:14pm Permalink
Howdy Lee and Max. Sorry to have to tell you this, but Toyota directly and also their excellent PR staff have both reported back now. No plans for TRD Pro Tacoma in Canada :( However, the product manager saw your request, plus another we had and will let me know if that changes. I will of course report it as a news story if that happens. Thanks for reading and posting.
Brett wrote on December 10, 2014 - 12:35am Permalink
Why would Toyota only release the TRD Pro in USA only? I contacted a General Manager of a local Toyota dealer and he informed this was also the case.....very disappointing. This was 3 months ago. TMS has made very poor decisions on which market would be fickle for the special models. All FJ cruiser trail sold out quickly, Canadians love their Toyotas. Hopefully Toyota will look at diesels in their trucks before they lose more market share to other manufacturers. Big opportunity miss by not having diesel in FJ Cruisers, Tacomas, and other trucks in NA market. They have Hilux in other markets and they dominate, makes no sense. Too much ex domestic executives in Toyota making poor decisions like they made in their previous roles. Come on Toyota lead the market, and stop chasing the competition.
Terry Greaves wrote on April 18, 2015 - 9:26pm Permalink
I am replacing my 06 Tacoma in the fall when the 16s come out. If Toyota will not offer the pro in Canada then I will be buying a Ford Raptor. I loved my Tacoma but it did not ride well on our logging roads
Deb wrote on October 16, 2015 - 11:32am Permalink
I just had my 2014 Tundra at the dealer for it's required oil change/service and my Salesman told me he had great news....The TRD PRO SERIES is coming to Canada. Hopefully this will happen, and should.
Terry Greaves wrote on October 16, 2015 - 9:47pm Permalink
Was told buy a salesman this week the dealership owner was told buy Toyota that the PRO was cumming to Canada also just no details of when. He thought spring maybe