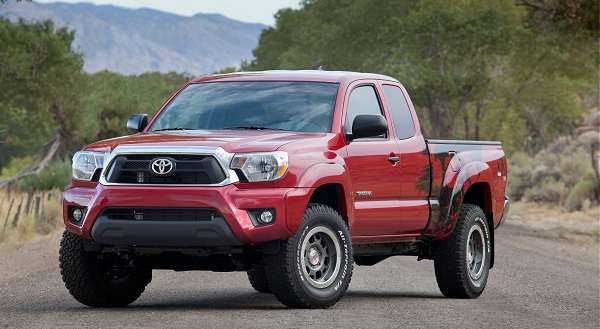 Can the Toyota Tacoma survive the 2015 Chevy Colorado and 2016 Nissan Frontier?

Toyota is losing share to Nissan already. Can it do anything to stop that considering that a new 2015 Chevy Colorado and a new 2016 Nissan Frontier are coming?
Advertisement

The 2014 Toyota Tacoma is already losing share to rival Nissan’s Frontier. That is not the worst of Toyota’s Tacoma worries. The new Chevrolet Colorado and the new GMC Canyon are just about to launch as 2015 models in the coming months. There is no doubt this could hurt Toyota’s Tacoma sales.

2016 Tacoma Will have to Fight a War On Two Fronts
After a new model enters the mix in any automotive segment the new model does well, takes a bite of the pie and then things often return to some sense of normalcy for the segment leaders. However, a sea change may be coming. The Nissan Frontier will be updated for 2016. That means that Tacoma may have a sales decline in 2015 and then another decline in 2016.

2014 Toyota Tacoma Sales Down, Nissan Frontier Sales Up Same Amount
In June, the 2014 Toyota Tacoma’s sales slide continued. The Tacoma’s June sales number of about 12,000 trucks is still respectable in terms of any vehicle’s sales. However, for the first half of the year to date, the Tacoma has lost 6,000 vehicles compared to last year. The Nissan Frontier sells in much smaller numbers, about 5,000 trucks per month, but for the first half of 2014 it is up exactly 6,598 units. It does not take much of a leap to assume that the Frontier is taking share from the Tacoma.

Nissan Navara Concept and Diesel Runner Threaten Tacoma
Our Nissan reporter previewed the new Frontier, that Nissan calls the Navara, in June. Turpen knows his Nissans, and he is not predicting a huge redesign of the Frontier. He does think it will have a diesel engine option though. Nissan created what it called the Diesel Runner Frontier to test consumer interest. Based on our recent stories about Tacoma diesel and hybrid possibilities, it is safe to say there is a lot of interest in a diesel truck this size. If Nissan builds it. The Navara may take some share as a result of new product sales at Toyota’s expense. Worse, it could be a draw to the showroom, where Nissan buyers will consider it, and then drive home in a Nissan truck of whatever type.

socrateos wrote on July 19, 2014 - 11:46pm Permalink
Total Sales from 2010 through Jun 2014 indicate that both Nissan and Chevy have a lot of catching up to do. TACOMA 592,890 FRONTIER 246,342 COLORADO 95,993
AlG wrote on July 24, 2014 - 10:34am Permalink
With a side note that the Colorado hasn't been in the N.A. market since 2012. The Colorado/Canyon sold approx 123,166 from 2010-2013 in the US alone.
fred lane wrote on August 13, 2014 - 9:21pm Permalink
And GM had to build a plant in Canada specifically to supply replacement cylinder heads for what amounted to about 1/4 of those vehicles sold.
Pete wrote on September 29, 2014 - 2:09am Permalink
Haha, "In the US alone" what other markets are buying the Colorado? Maybe a handful in Canada, and thats it!
mike stefanovich wrote on July 23, 2014 - 10:57pm Permalink
I own a 03 tundra 337k,trouble free.want a new tacoma,but waiting for 300hp.the Toyota is simply the best.
didi wrote on July 29, 2014 - 7:56pm Permalink
I predict Silverado sales suffer more than Toyota Tacoma sales concerning the up coming Isuzu Dmax Derived Colorado/canyon concerning frontier diesel that is another matter Tacoma is and will continue to slide until they lower prices and or bring more fuel efficient offerings I also predict Ram's eco diesel will slice and dice the sales of all comers until they too begin to sell diesel equipped Ford's truck fleet is just as thirsty as Toyota's they will lose share to ram.
John Goreham wrote on July 30, 2014 - 8:40pm Permalink
Well said. We will know soon how the new Ford F-150 with lighter weight and new EcoBoost does on fuel.
Bolt Stevens wrote on September 17, 2014 - 11:14am Permalink
This is a speed bump for Toyota...wait until they respond....my hope? A hybrid Tacoma...most buyers don't work Tacoma's. If they do, the work them lightly. Use the existing 4 cylinder engines in the Camry's and add the Synergy Drive...put enough batteries in the frame below the bed to carry the day.. Get one that can get 28-30mpg and it's game over.
d-dub wrote on December 18, 2014 - 2:51pm Permalink
I'm probably going to be getting the Colorado diesel unless one of these Japanese automakers come out with a midsized truck with similar torque/mpg. I don't really enjoy driving the massive full sized trucks but I need something that can get two atvs and my wife and gear up and down the mountains of Colorado. A midsized diesel is perfect for me. I feel like I should give GM my business just for having the balls to do what the Japanese wouldn't anyway.
Dutch wrote on January 24, 2015 - 9:12pm Permalink
I have been waiting on Nissan for over two years to release the Frontier with a turbo diesel. I am hoping they quite playing it so conservitative and relase the Cummins turbo diesel in 2016 in the refreshed Frontier. Release it and it will sell.....