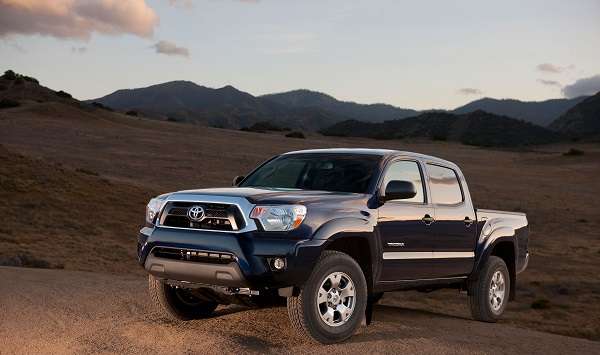 Until Lexus launched its new NX 300h AWD hybrid crossover thoughts of a Toyota Tacoma Hybrid pickup were unrealistic. Now that Toyota family AWD hybrids the same weight as the Tacoma have arrived, the fantasy is becoming more fun to consider.
Advertisement

Have you ever wished you could have a Toyota Tacoma pickup truck for light duty, but not have to pay a penalty at the pump? Your days if waiting could be over if Toyota decides to move its proven drivetrain from an upcoming model to the popular Tacoma.

Lexus is about to introduce a new hybrid crossover to the US market called the NX 300h. This new crossover will become the US market’s fuel economy champion for crossovers upon arrival and it is unclear if any real rivals will come along for quite a while. Even the much larger Tesla Model X is a year away. So for now the Toyota Highlander Hybrid and Lexus RX 450h will remain on top. However, these vehicles are larger and heavier than a Tacoma and are using 6 cylinder hybrids. Imagine how much of a fuel miser the Tacoma would be if it adopted the 4-cylinder hybrid drivetrain of the “300h” Lexus vehicles.

Engine Specifications for Toyota Tacoma Hybrid
Before you turn away figuring that such a drivetrain would be vastly underpowered for a compact pickup realize that the “300h” drivetrain already packs more power than the base Tundra does. The approximately 200 horsepower is accompanied by 156 lb-ft of torque. That is a problem. With trucks torque matters more and having less of it will make a hybrid Tacoma a truck for light duty only. Towing would be limited to small trailers only, with limited cargo. Still, there are people for whom that would be enough.

We’ve driven the Lexus ES 300h. This is a large car that weighs about 3700 pounds. The weight penalty is only about 100 pounds due to the battery packs. The Tacoma is very close to this weight, almost identical in 4x4 configurations. From this we can say that driving the Tacoma would be fine. The ES 300h does not feel underpowered around town and in normal driving the power is adequate. Those looking for a truck with the emphasis on fuel economy would not complain.

Fuel Economy of Toyota Tacoma Hybrid
In the ES 300h the hybrid drivetrain can deliver an impressive 40 MPG combined. Let’s break that down considering the reductions that would come from the Tacoma’s truck style configuration. The Tacoma is taller and less aerodynamic for many reasons. We will deduct fully 15% for this. That puts us in the ballpark of about 34 MPG combined. We would imagine the Tacoma as a front wheel drive truck. The “300h” drivetrain is already configured that way in the ES, but in the NX 300h it will also be able to send power to the rear. In 4WD configuration we expect that the Tacoma would lose an additional 10% of its fuel economy. That means about 31 MPG combined. The current Tacoma with the base 4-cylinder engine and 4WD gets 19 MPG combined. Thus, the hybrid we are discussing would have fully 55% better fuel economy. The coming Lexus NX 300h AWD is expected to return about 32 MPG combined, so this breakdown feels about right.

Trade-offs of a Toyota Tacoma Pickup
Before we finish we have to emphasize that the 300h hybrid powertrain and the body-on frame Tacoma would not simply “bolt-up.” Marrying the two would be a challenge. We think the world’s largest and wealthiest automaker could find a way though. Could it do it cost effectively? Not profitably. However, automakers these days make a lot of vehicles for a lot of reasons that don’t bring in the Benjamins. In the Lexus line up about $3,000 is the usual mark-up for a hybrid version of a vehicle.

Reliability is also a concern. Frankly, people that drive hybrids drive them quite differently than pickup owners drive pickups – even when they are in fact the same person. Would a hybrid pickup last? The jury is out.

Conclusion – Would a hybrid Tacoma Make Any Sense
Keeping in mind that there are clubs dedicated to hybrids and EVs that are completely nuts about cars that barely sell, Toyota could make some waves with the Tacoma Hybrid and satisfy some customers. The BMW i3 sold about 350 units in each of its first two months of production. Ford has plug-in and electric cars that sell in numbers so small nobody even includes them in the discussion of green cars. And Ford is quite proud of its achievements. Yes, a Tacoma 4WD compact truck getting 31 MPG might make sense from the perspective of a green car buyer that likes to garden, camp, fish, and haul his or her own building materials home from the ‘Depot. From the perspective of a Ford F-150 owner who uses the vehicle in his masonry business every day, no, a hybrid small truck is not really a consideration.