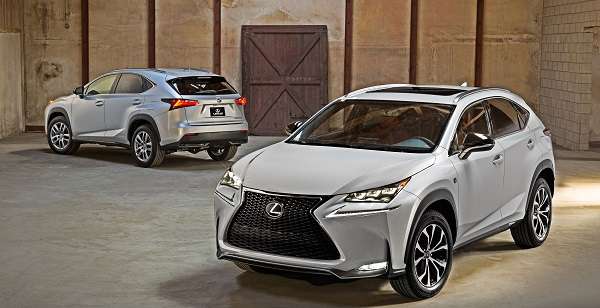 The new NX family from Lexus has three engines, not just two, and will have the styling and power to make a big splash in the luxury compact crossover segment.
Advertisement

Today Lexus released the first full photos of the exciting new 2015 NX 200t F Sport and NX 300h crossovers. This all-new vehicle family from Lexus will dive headfirst into the hot compact luxury crossover market. The vehicles will come with both turbocharged engines, a first for the brand, and also a proven relatively sporty hybrid powertrain. Interestingly, Lexus waited until today to surprise us with the news that there will also be an NX 200 with a non-turbo engine. The company also named these new vehicles for us for the first time.

The new 2015 NX 200t, NX 200, and NX 300h will be available in both front and all-weather drive. Adding in the F Sport variants means this will be a full family of vehicles, and a larger offering in terms of possible configurations than the larger RX 350 and its variants. The NX 200 will most likely use the Toyota RAV 4’s engine and have about 190 HP, the NX 300h will use the powertrain found in the US version of the ES hybrid with about 205 HP in total. The turbocharged engine is all-new to the brand and we suspect it will have about 235 HP, but will have good torque starting low in the rev band, and be designed to minimize turbo-lag.

The body style of the new NX family is close in many ways to the concept vehicle we have seen, but with a more Lexus-like front. Although critics like to criticize the new bold spindle grill, every Lexus vehicle model jumped in sales after receiving this new styling element, and the IS and GS sales doubled. Like other Lexus models the NX will have an F Sport variant that includes unique colors and will most likely have an even more pronounced spindle grill.

The roof line of the new crossover has its peak above the rear-passengers’ heads. That is to offer the lowest possible silhouette while still providing the ample headroom expected of a luxury vehicle. The low rear roof line at the hatch glass looks to our eye like Mazda’s CX-5. That is a compliment.

Wheel packages for the new NX line will include 17 inch and optional 18 inch combinations. This brings us to our first concern about the new vehicle. Our opinion is that the RAV 4 and other Toyota/Lexus family vehicles with up-sized wheels ride too harshly. The strong engines and highest trim levels often have the larger, stiffer-riding wheel-tire package like it or not, spoiling an otherwise nearly perfect vehicle. We will report our findings after we drive the NX. Our second concern is that the NX 200t will require premium fuel. If so, it will not save owners money compared to an NX that could have used the 3.5 liter V6, which is rated for use with regular unleaded in the RX 350.

Lexus continues to march in the right direction with regard to interior styling. Thankfully the new NX won't be wood-trimmed and will have a metal and "soft material" trimmed interior. The half-wooden steering wheel of the RX would simply look stupid in a car targeting the market niche this one does and wood laminate interiors have not been cool or classy since before the internet. Lexus is also updating the human-machine interface to include a touch-pad in the NX. We like the Lexus infotainment packages in general, but some do not like the mouse its Remote Touch Interface uses. Perhaps this will be the improvement that brings Lexus closer, or equal with, to the class leaders. Showing its understanding of the real purpose of our car’s interior (a place for our phone to be comfortable), Lexus now will offer a wireless charging pad.

Done right, this NX 200t, NX 200 and NX 300h family could push Lexus closer to the top of the sales charts in the US. It already owns the top spot on most reliability, quality, resale value, cost of ownership and other such charts.