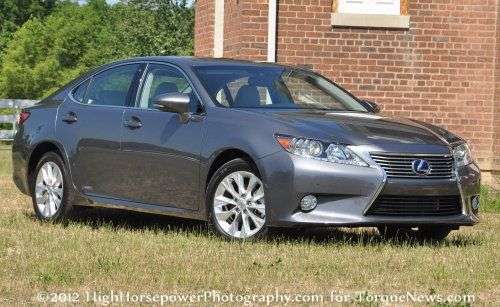 The new 2013 Lexus ES300h will be remembered as the car that was the tipping point for hybrid drivetrains in premium automobiles. From here forward the elements this car has perfected will become expected in all cars of its type.
Advertisement

Lexus ES Background
The 2013 Lexus ES300h has a long legacy. In 1989 Lexus was created to capture Toyota drivers and owners of other premium vehicles who desired a higher level of luxury and service than Toyota had offered in the past. In order to earn the business of these customers, Lexus started with a front-drive platform based on an existing model sold by Toyota. From there it developed a car so refined that it was better in most ways than the established luxury brands at any price point. Lexus followed the new trend in naming, giving the car the moniker ES250. The sixth generation, 2013 Lexus ES300h is just as much a game changer as that 1989 model was.

Overview of the 2013 Lexus ES300h
The new 2013 ES300h is a hybrid. If you drove this car back to back with other entry-luxury cars in the class you likely wouldn’t know this. In 1989 the Lexus ES came with a 2.5 liter engine that made exactly 156 horsepower. At the time, customers who were seriously considering this type of car did not think that was underpowered at all. In fact, the power would have seemed quite appropriate to a near-luxury car of its size and type. The 2013 Lexus ES300h comes with a 2.5 liter engine that generates exactly 156 horsepower. Today that number seems a little low when it appears on a specification page. In actual operation the gasoline engine in this car is just fine. When assisted by the electric motor it is close to being peppy. There is always enough power for daily driving and merging onto the highway and overtaking is never a concern. If you want a luxury rocket, and you want a Lexus, there are many to choose from. That is not what the ES class is designed to be. Its buyers know that. For the record, the total system horsepower is an even 200 when the electric assist is factored in.

ES300h Hybrid Drivetrain Details
The drivetrain in the 2013 Lexus ES300h starts with a 2.5 liter four cylinder gasoline engine. Instead of the Otto cycle, the engine operates on the Atkinson cycle, which provides a shade more efficiency in most driving situations. At 156 horsepower the engine is just enough. Not what would be considered powerful, but it isn’t a slow-poke. The engine connects to the front drive system via a constantly variable transmission. A CVT offers a bit of a fuel efficiency gain when compared to, say a 6 speed automatic. Working with the gasoline engine in some cases, and sometimes working to propel the car on their own, are two motor generators. Diving deeper than this into the inner workings is not really practical. Let’s believe that this system works. When you drive it you will agree.

The ES300h driver has the ability to select from four modes of driving. “Normal” operates all of the systems automatically. Sometimes the car starts off in all-electric mode, and sometimes it starts off being moved by the gas engine. Sometimes both are working to hustle the car from a stoplight. Eco makes the “gas” pedal less responsive. It tries to keep the car in electric-only mode whenever it can and it makes the car less satisfying to drive in normal operation. In stop and go traffic it would be an ideal tool to help conserve fuel. Sport Mode makes the most use it can of the combined system power of the drivetrain’s many components. EV mode can be selected but it really is a mimic of the Eco mode. It will just try harder to hold off the gas engine.

If a nitpicker labored to sense the transitions the car makes from one mode of operation to another it is possible they could detect it. To the contrary, when one drives this car normally these transitions are never obvious, definitely not intrusive, and are nearly always imperceptible. This is the first of the many hybrids I have ever written about that includes that statement.

Fans of electric cars and hybrids always want to know about the batteries. Lexus employs nickel metal hydride batteries on this vehicle because they work. They are cost effective, reliable, have a good size to power ratio, and did we mention that they work? We know how much power they can store and deliver, but absolutely refuse to tell you because it is about as important as the volume of air the tires can hold. It is enough for the system to work well and Toyota and Lexus have absolutely proven that the technology lasts past 150,000 miles. One thing we will say is that the system is air cooled. Beware liquid cooled batteries in anything.

Driving Impressions of the 2013 Lexus ES300h
When we were invited to test this car we knew we would be drawing comparisons to the previous generation ES350, which we know quite well. That was, and is, a fine car that drives nicely. This ES300h is better than that car in every single way we can think to list except braking. Braking in hybrids seems to always have some kind of issue. Either the brakes are not there, and then grab too aggressively, or they are non-linear in some other way. This new 2013 Lexus ES300h seems to be 95% of the way to “normal.” The binders do have a bit of non-linearity just as you come to a slow stop, but they are safe. There is a great sound as the car decelerates. That is the sound of your wallet getting fatter as the battery recharges to offer the drivetrain free energy.

All car makers stiffen up the chassis, make revisions to the suspension, and lather on more effective sound deadening material when they come out with a new generation, and this new car is no different. Frankly, those changes don’t usually mean much. In this car they do. Up front Lexus changed the springs to opposite-wound coils. That equates to better straight ahead feel that we noticed. The ride is so silky smooth that when we drove an ES350 model with the optional 18” lower-profile tires we vowed to warn everyone we spoke to that they do not help the handling and reduce the pleasure of rolling over road imperfections with no noticeable effect. Skip those if they are ever offered on the hybrid.

The steering on the prior generation was good, but it did feel a little strange when the wheel was turned at a sharp angle such as at a stop light. The new car employs electric steering and it has a better feel. It also adds just a smidgeon of improved fuel economy.

Interior
The biggest change to the 2013 Lexus ES300h with regards to the interior is the dash and infotainment screen. The dash now has a dual level style with the driver’s most needed information up top to help keep eyes pointed to the road. The look is quite modern and features ambient lighting at night. Wood grain trim now includes bamboo. The infotainment screen is larger and recessed, since the touch screen design is now replaced with the Remote Touch, mouse style interface. This is a great system, ergonomically fantastic, and very intuitive. We did struggle to increase the navigation volume and we could not seem to find the speed limit for the road we were on in the display. Perhaps a glance at the manual might have helped? On the other hand, after this many years of navigation systems in cars should a driver have to look the manual to operate its basic functions? The audio quality is on par with the average in the class. Don’t try the Mark Levinson sound system unless you plan to buy it. Once you hear it, the standard system no longer sounds acceptable.

Seats in the new car are good. Comfortable, with excellent lumbar. The models we tested did not offer cooling, but did have heat of course. Rear seating space is so plentiful you will almost wonder if that space could have been put to better use. The steering wheel can now come with heat in the ES, which is the sort of option you didn’t know you needed until you have it. As you approach the vehicle it notes your specific key fob and it moves the seat to your fob’s position. However, be warned, if you and your spouse approach the driver’s door with both fobs, the seat will eject through the sunroof.

The trunk in this car is large. The conventional drivetrain version has a larger trunk, but you won’t miss the space. Due to the battery and other components being stored in the rear seatback there is no hockey stick/snowboard pass through, which is a deal breaker for some families. They will have to take their RX450h to the winter sports events. Under the trunk mat is a compact spare. A full size spare would have been better, but at least we are not insulted by a “repair-kit” pretending to suffice.

The dash displays are fantastic in the ES300h. The gauges look painted, but when you switch modes you have a tachometer if you are in sport, or an Eco display in that mode. It is very slick. The thumb toggle on the wheel gives the driver great trip computer information and now the TPMS system displays the tire pressure in each corner which is a welcome improvement. The AC system is tied into the mode selector switch. When the driver opts for Eco, the AC uses more recirculation mode to save a few drops of gas.

The safety content of the ES300h has been bumped up to the full luxury class level. Rear cross traffic, lane departure, and blind spot monitoring are all options that can be had at more than just the max trim level. One notable improvement is that these all have evolved to use less space behind the rear view mirror, so your EZ-Pass can return to that spot.

Exterior design was supposed to be the big story for the new ES series, but the spindle grill is now creeping through the line and isn’t news anymore. The car looks tougher as if the fenders were more muscular. The spindle grill is not as polarizing as the Acura grill change was and most seem to like it, including this writer.

Summary of the 2013 Lexus ES300h
The 2013 Lexus ES300h is a car that stands apart from its siblings. Drivers of Toyotas like to say that the Lexus model closest in size and shape to their car is simply a more expensive car just like theirs. They are wrong, but let’s not tell them. The level of love and care that goes into the Lexus models is simply more apparent. The recent J.D. Power and Associates top ranking of the ES in its category is very telling. The Camry did not win its class. It didn’t even come in second or third. Get the picture?

Throughout this review we have noted where 2013 Lexus ES300h saved a bit of gas here and there. The result of all those little sips being saved is enormous. The car gets 40 mpg city, 40 mpg combined, on regular unleaded. That is incredible in a vehicle this size. That is unprecedented in a car of this category. Many hybrid luxury cars don’t get great fuel mileage, and use premium unleaded, which can reduce fuel economy by 10 to 15%. This new 2013 Lexus ES300h will be remembered as the car that changed a lot of opinions about hybrids.

Lexus thinks 25% of buyers will choose the hybrid over the conventional engine. They are right. In year two we would expect hybrid ES300h to be closer to 40% of total ES sales, and continue to climb as the word gets out.