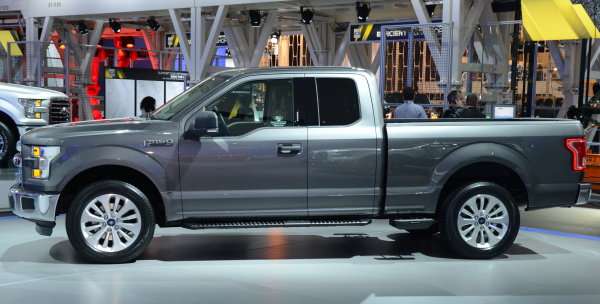 We brought you the first pricing for the 2015 Ford F150 earlier this week which includes increases across the board, but those increases are very minimal when you take into consideration the added cost of the aluminum combined with the new standard features, it leads me to believe that Ford Motor Company is eating some of the added cost of the aluminum body panels – at least on the lower prices trimlines.
Advertisement

When Ford announced that the 2015 F150 would make use of a collection of aluminum body panels, there was instantly a concern of the prices rising substantially due to the simple fact that making a truck out of aluminum costs more than making a truck out of steel. The raw materials cost more, as do the tools needed to manufacturer the trucks with this lightweight material so there is no doubt that Ford Motor Company is incurring more costs to build the 2015 F150 than they did with the 2014 F150. However, quite a few people have pointed out that the price increases for 2015 – at least in the lower level models – don’t seem steep enough to cover the added production costs and the new standard features.

Increases are Attributed to Added Value Items
When the pricing for the 2015 Ford F150 were rolled out with price increases across the entire lineup, the Motor Company was quick to point out that every trimline came with a ton of added value and it was the addition of those new standard features that raised the base prices – not the inclusion of aluminum in the body. This was a smart move by Ford, as increasing the pricing due to the added aluminum would give critics of the new lightweight body even more ammunition while raising the price because of standard goodies like an 8 inch touch screen, a backup camera and seat massagers leaves the aluminum haters speechless.

So if Ford didn’t increase the price of the 2015 F150 due to aluminum usage, how did Ford deal with the added cost that comes with using this lighter and more costly material? Easy…they are eating the expense rather than passing it down to the customer.
While the higher priced King Ranch and Platinum 2015 Ford F150 models receive much bigger price increases, those models come with even more standard features so while some of the aluminum cost might be making it these trucks – most of which only come with larger bodies – Ford is still absorbing some of the materials costs.

I am betting that the 2015 Ford F150 will perform beautifully from top to bottom, including the aluminum body panels. Should Ford get through the 2015 model year without any real negative spin applied by the critics, the Motor Company will be credited with starting a trend that will most certainly sweep through the industry. Once everyone is singing Ford’s praises for cooking up this aluminum alloy that can serve as light yet durable body panels on the bestselling car in America, Ford can inch the prices up a little more for the 2016 or 2017 model year and begin making more money to offset the costs that they absorbed with the 2015 model year pickups.

It is a brilliant move by Ford Motor Company – or at least it will be provided that the 2015 Ford F150 does as well as the company is expecting. Using aluminum is a gamble, and this pricing schedule compared to the new standard features shows that Ford isn’t making the customer pay for that gamble.