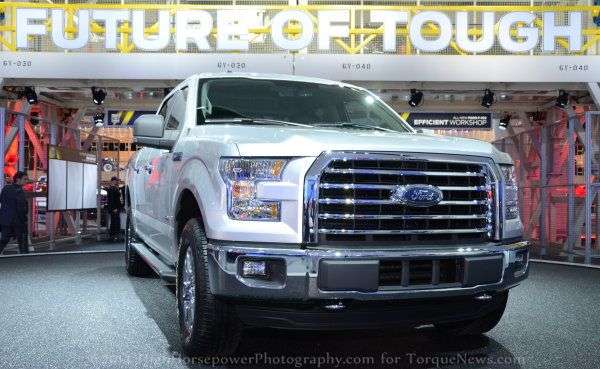 Reports flooded the internet this morning that a next generation Ford F Series Super Duty pickup prototype test truck had caught fire and literally burned to the ground – and that the result of the towering inferno was melting action that suggest that the Super Duty will use similar aluminum panels to those used on the 2015 F150.
Advertisement

Earlier this morning, a friend in the industry wrote me and asked if I had heard about the new Ford Super Duty test truck that had caught fire during testing. I had not – but reports soon flooded the internet with images showing what is very clearly a next generation Ford Super Duty all camouflaged up for test duties on fire. Not a little bit on fire – like towering inferno on fire.

The mainstream media jumps on a story like that because any time a popular vehicle like a Ford pickup catches fire, it stirs up conversations about vehicles being unsafe or whatever other nonsensical problems are trumped up by big media as a result of the fire. This Ford Super Duty catching fire doesn’t tell us anything, as we don’t know what kind of crazy tests that truck had been put through before catching fire and the component at fault could be a part that isn’t included on a production vehicle. However, some media outlets will turn this into a big deal for the same reason that some people watch NASCAR for the wrecks.

I don’t care about the fact that a Ford test truck caught fire – I care about how that Ford truck melted as it burned.

The Burning Ford Super Duty Turned to Liquid
According to sources that covered this fire when the news broke this morning, the Ford Super Duty body was reduced to droplets of molten metal. When a vehicle burns, it does not burn hot enough to melt the steel bodies so while things like the roof and the hood might soften and twist around the pile, a burning steel car or truck doesn’t literally melt. When a steel truck burns, there is still truck left when the fire burns out. On the other hand, if you have ever seen a vehicle with aluminum construction burn, it turns into a pool of metal. Aluminum has a much lower melting point so the heat of a burning vehicle is intense enough to literally turn the softer alloy into liquid.

In the case of the burning next gen Ford Super Duty, the entire body melted away as the truck smoked, burned, exploded and smoldered…leaving behind only the strongest steel in the body. Based on the massive level of carnage, I would speculate that the vast majority of the F250/F350 body is comprised of some high strength, lightweight aluminum alloy.

The Next Gen Super Duty Could Shave Even More Weight
Should Ford Motor Company use the aluminum from the 2015 F150 across the rest of the truck lineup, the next generation Super Duty could shave some very serious weight. The Super Duty trucks are bigger than the F150 so even if everything else remains the same, the larger truck with more aluminum replacing steel could drop more weight than the smaller half ton pickup. For example, if the 2015 Ford F150 Super Crew dropped over 700 pounds through the use of aluminum, the bigger Super Duty could cut closer to 1,000 pounds.

The problem with cutting a half ton from the next gen Ford Super Duty is that in the world of heavy duty commercial towing, having a truck that weighs too little can prove to be a disadvantage in some cases. While removing weight from the Super Duty will allow it to do more work, make better use of the available power and offer better fuel economy – when towing 30,000+ pounds, you want to have some weight in your tow vehicle to avoid having your load pull you around. Because of that, Ford will have to balance the ongoing effort to cut weight with the need of having a certain amount of weight to keep pulling a big, heavy load safe.

I should point out in closing that no one was hurt in the Ford Super Duty prototype fire, but the truck was obviously a total loss. The truck was reduced to pretty much nothing and while some outlets will make this out to be a huge ordeal – there is no way of knowing what was being done to this truck when the fire began. This fire happened in Death Valley so we know that it happened in one of the hottest, driest places in the country. This area is generally used for torture testing so we can guess that this truck was being submitted to some very harsh testing when it caught fire. Ultimately, an incident like this allows Ford to prevent this kind of problem from happening while in the hands of a private owner.