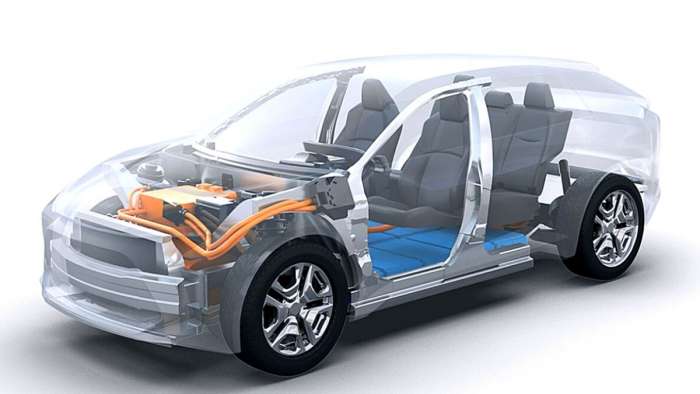 Toyota has a number of new electric models in the pipeline. It starts with an electric SUV in RAV4 format, which Toyota has now shown in a teaser picture!
Advertisement

The somewhat crude-looking abbreviation e-TNGA (electrified Toyota New Global Architecture) has a bright future at Toyota. Behind it is a new electric platform, similar to the MEB (modular electric drive kit) of the VW group. The Toyota platform was developed together with Subaru and will provide the basis for a wide variety of electric models. Toyota is taking the first step with a mid-range SUV the size of the VW ID.4.

With similar body dimensions, the new Toyota electric SUV should offer a longer wheelbase and significantly more space than its corporate brother RAV4.

Judging by the sketches, the new Toyota EV SUV will come without "Frunk," but with a fashionably flat rear window. The new e-TNGA platform itself is scalable and should allow front, rear and all-wheel drive as well as a wide range of battery capacities and engine outputs. This means that it can meet various requirements and vehicle segments.

The mid-range Toyota electric SUV will be successively followed by other models. These should not only include SUVs, but, according to the "Carscoop.com" magazine, also be a sedan and a minivan.

According to Toyota, none of the models should compromise when it comes to driving fun.

The new Toyota SUV could be launched in 2022.

Toyota has not yet announced prices and planned production numbers of its electric SUV, when asked by AUTO BILD. The E-SUV is currently being prepared for production. A presentation can therefore still be expected in 2021. The market launch could take place in 2022, when the new generation of the Aygo small car will also be launched.

Tesla-Funded Research Reveals One of The Biggest Mysteries of EV Battery
Tesla Tesla Buyer Nets a Whopping $12,000 Discount After Asking for Reduction
END_OF_DOCUMENT_TOKEN_TO_BE_REPLACED