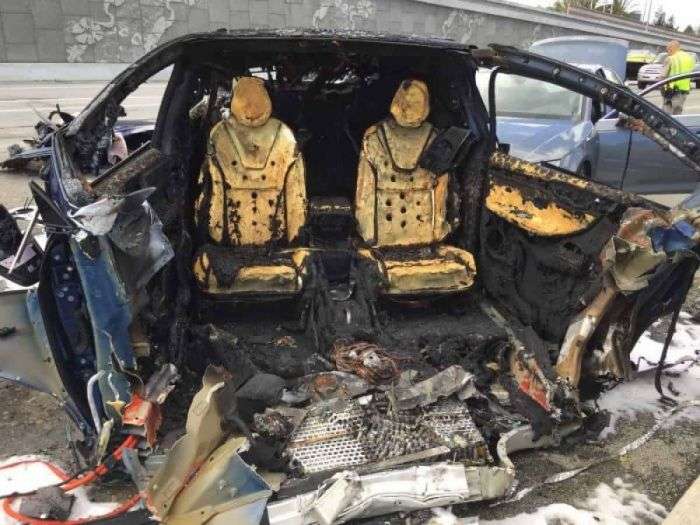 Today the National Transportation Safety Board announced that it removed Tesla as a party to the NTSB’s investigation of the March 23 fatal crash of a 2017 Tesla Model X near Mountain View, California. Tesla responded saying it will issue a Freedom of Information Act request and says it chose to withdraw from the investigation.
Advertisement

The NTSB release says it took this action of removing Tesla from the Model X crash investigation (see Model X post crash video) "because Tesla violated the party agreement by releasing investigative information before it was vetted and confirmed by the NTSB.

Tesla, on the other hand, says they "chose to withdraw" from the agreement.

There is an active discussion on Reddit on this subject in which Tesla enthusiasts and interested people make number of conclusions. A user named hkibad writes an illustration of what may have happened.

NTSB: Stop saying things publicly.
Tesla: No.
NTSB: You are kicked off the probe.
Tesla: We knowingly made a decision that could get us removed, so in effect, I withdrew.

To be fair, this conversation may have not taken place. Some people say Tesla was kicked off. Others say Tesla withdrew. I think Tesla effectively withdrew when they made their statement. They knew that the statement was not in line with their agreement with the NTSB, and would know this would happen eventually.

Let our readers decide for themselves reading both statements. What do you think? Please share your thoughts in the comments section below.

WASHINGTON (April 12, 2018) — The National Transportation Safety Board announced Thursday the removal of Tesla as a party to the NTSB’s investigation of the March 23 fatal crash of a 2017 Tesla Model X near Mountain View, California.

The NTSB took this action because Tesla violated the party agreement by releasing investigative information before it was vetted and confirmed by the NTSB. Such releases of incomplete information often lead to speculation and incorrect assumptions about the probable cause of a crash, which does a disservice to the investigative process and the traveling public.

The NTSB has used the party system for decades as part of its investigative process and offers party status to those organizations that can provide technical assistance. Tesla was offered and accepted party status for the NTSB investigation into the Mountain View crash. Participation in the party system is a privilege, which allows the sharing of investigative information with all parties that agree to the terms of the party agreement during the early fact-gathering phase of an investigation. This sharing ensures that a party to an investigation has sufficient information to take any immediate actions necessary to ensure safety. For example, the NTSB issued an urgent safety recommendation on March 19 related to the crash of a sightseeing helicopter in New York City, which allowed corrective actions to be carried out immediately.

“It is unfortunate that Tesla, by its actions, did not abide by the party agreement,” said NTSB Chairman Robert Sumwalt. “We decided to revoke Tesla’s party status and informed Mr. Musk in a phone call last evening and via letter today. While we understand the demand for information that parties face during an NTSB investigation, uncoordinated releases of incomplete information do not further transportation safety or serve the public interest.”

NTSB investigations are comprehensive, independent, and thorough. They generally take 12 to 24 months to complete. Transparency in the investigative process is achieved through the public release of on-scene information, preliminary reports, and the public docket, as well as through board meetings that are open to the public.

“There is nothing in the party agreement that prevents a company from enacting swift and effective measures to counter a threat to public safety,” said Sumwalt. “We continue to encourage Tesla to take actions on the safety recommendations issued as a result of our investigation of the 2016 Williston, Florida, crash.”

Here is the text of Tesla's full response to NTSB. (From CNBC)

Last week, in a conversation with the NTSB, we were told that if we made additional statements before their 12-24 month investigative process is complete, we would no longer be a party to the investigation agreement. On Tuesday, we chose to withdraw from the agreement and issued a statement to correct misleading claims that had been made about Autopilot — claims which made it seem as though Autopilot creates safety problems when the opposite is true. In the US, there is one automotive fatality every 86 million miles across all vehicles. For Tesla, there is one fatality, including known pedestrian fatalities, every 320 million miles in vehicles equipped with Autopilot hardware. If you are driving a Tesla equipped with Autopilot hardware, you are 3.7 times less likely to be involved in a fatal accident and this continues to improve.

It's been clear in our conversations with the NTSB that they're more concerned with press headlines than actually promoting safety. Among other things, they repeatedly released partial bits of incomplete information to the media in violation of their own rules, at the same time that they were trying to prevent us from telling all the facts. We don't believe this is right and we will be making an official complaint to Congress. We will also be issuing a Freedom Of Information Act request to understand the reasoning behind their focus on the safest cars in America while they ignore the cars that are the least safe. Perhaps there is a sound rationale for this, but we cannot imagine what that could possibly be.

Something the public may not be aware of is that the NTSB is not a regulatory body, it is an advisory body. The regulatory body for the automotive industry in the US is the National Highway Traffic Safety Administration (NHTSA) with whom we have a strong and positive relationship. After doing a comprehensive study, NHTSA found that even the early version of Tesla Autopilot resulted in 40% fewer crashes. Autopilot has improved substantially since then.

When tested by NHTSA, Model S and Model X each received five stars not only overall but in every sub-category. This was the only time an SUV had ever scored that well. Moreover, of all the cars that NHTSA has ever tested, Model S and Model X scored as the two cars with the lowest probability of injury. There is no company that cares more about safety and the evidence speaks for itself."

Update: Tesla Model Y Will Have a More Advanced Computer Than The Current Autopilot.