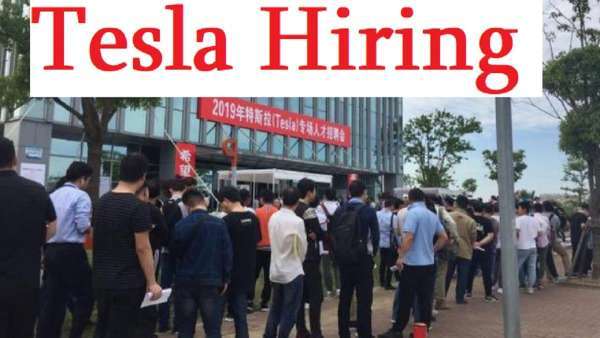 Yesterday Tesla held a hugely popular job fair recruiting people for its Gigafactory 3 near Shanghai. According to Vincent, who is an authority voice on Twitter tweeting about Tesla, the company is hiring in for major areas. Workshops are held in the following departments

"This is 1st large-scale on-the-spot recruitment of Tesla China, covering the 4 major workshops of stamping, welding, painting and final assembly, as well as other departments such as facility operation and logistics, which almost covers all positions in the production line of Tesla," tweeted Vincent.

He also wrote that Tesla's first job fair in China was held on May 29th in Lingang. It was so popular and so many people came that it lasted until 7PM, while originally was scheduled to end at 4PM.

What is your timeline of expected production in China Gigafacotry 3? Would you say that the timeline of having the first model 3 come off production line in September is too ambitious? By saying ambitious I am taking into consideration the speed that the Gigafactory 3 near Shanghai was build.

Also watch our previous video showing how Model 3 helped Tesla to take the sales lead from Chevy Volt. What do you think the Gigafactory in Shanghai will be completed and how will it effect Tesla's performance?