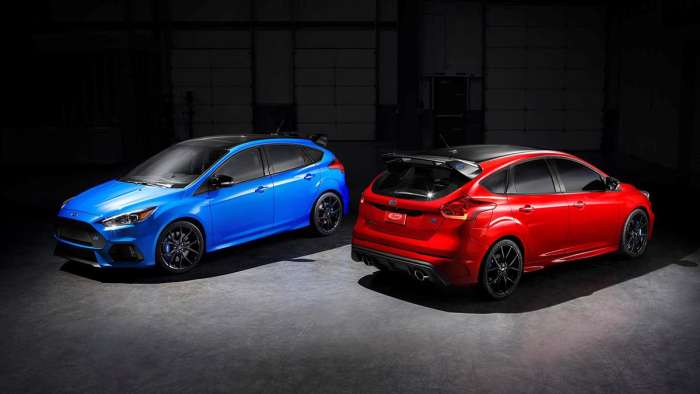 Rumor has it Ford will bring back Focus RS

The Ford Focus hasn’t been produced by the Ford Motor Company since 2018. Ford has moved away from cars, except for the iconic Mustang. But according to a report in Cars magazine, a European-focused publication, Ford may be working on a limited edition, Focus RS. Now, whether this comes to the U.S. market or not is another story. But I sure hope it does!

Ford still sells the Focus in Europe and Australia and this sporty, fun hatchback does well in those markets. In the U.S. Ford has committed to moving on from cars and turning their attention toward SUVs and trucks. The last sporty iteration of the Focus was the ST, which jammed out 252 horsepower and was quite a hot little hatchback. It was a youth-oriented car for Ford with performance the focus. As such the Focus ST remains the last of the manufactured Focus here in the United States.

Ford Focus: 1998-2018
There were three generations of the Focus produced by Ford. While the Focus debuted in Europe in 1998 as a replacement to the Escort, it didn’t make its way to the U.S. until the 1999 model year. It was available as a four-door and two-door sedan only initially. It wasn’t until the 2011 model year that the Focus really evolved as something youth-focused and performance driven. For this model year, a five-door hatchback debuted to much praise. There was the introduction of a fuel-efficient 2.0-liter direct-injected engine.

Midway through this generation, Ford unveiled the performance-focused ST and RS models. The RS borrowed the Mustang’s 2.3-liter Ecoboost engine. Both the ST and RS showed Ford’s focus on performance and that they still knew how to produce a small, fun-to-drive hatch. But they discontinued production of the Focus in 2018 here in the United States. So, will Ford target those same consumers who are craving performance, but wouldn’t normally consider a Mustang?

Ford Shifts to Electrification and Performance
Part of this Focus RS rumor is that Ford will integrate hybrid technology with Ecoboost to create a car that has even more power and performance. This is the part of the rumor that’s true and believable. We all know that Ford is shifting its attention toward electrification and away from combustion engines. So if Ford is going to dabble in small performance cars, especially aimed at a youthful buyer, why not load up the Focus with such technology.

When the Focus RS was last produced in Europe it had 350 horsepower, making it the fastest Focus ever produced. So you could speculate that with an electrical integrated starter-generator that such a Focus could exceed 400 horsepower. Could you imagine such a small sporty hatchback? I know something like this would scratch me right where I itch. Additionally the Focus RS would be all-wheel drive.

So, we are begging Ford Performance to go forward with these plans, but don’t leave us out here in the United States. There’s still a market for such vehicles here and hey if it’s got hybrid technology that can help the government CAFE regulations as well. So it’s a win-win for everyone.

DeanMcManis wrote on December 24, 2019 - 2:04pm Permalink
An electrified Focus RS for the U.S. is a nice dream, but I do not see it happening. The biggest reason is that Ford U.S. dropped Focus production entirely here. The Ford Focus is now being built exclusively by the Ford auto plant located in Saarlouis, Germany. So even though it still makes good sense to make a Focus RS EV in Europe, the small potential sales volumes couldn't justify importing them here. However there could be some hope that Ford would leverage that performance EV drivetrain for a hybrid AWD Mustang coupe and maybe a performance hybrid Escape ST.
Jimmy Dinsmore wrote on December 25, 2019 - 10:46am Permalink
I totally agree with you about this being a pipe dream and won't make it here on US soil. We can dream though, right?
Marc Stern wrote on December 24, 2019 - 6:47pm Permalink
Jimmy from everything I have heard and read this is just a nice forum-driven rumor. Ford is getting out of the car business in a big way (I have heard this from the former dealership where I worked for a bit and where I get my Fusion serviced as well.) The only car left in the lineup will be the Mustang. It would be a nice Christmas gift, but I don't think so.
Jimmy Dinsmore wrote on December 25, 2019 - 10:45am Permalink
Yes, I know. You're sadly correct. I do think it's a misstep by Ford. I know the profits are smaller on cars, but I think the consumer will surge back to cars. And then Ford will be playing catch up again. Just as when many jumped out of the small truck segment, only to re-engage in it.
Marc Stern wrote on December 25, 2019 - 10:59am Permalink
Very true -- the Fusion I drive is an excellent example. It is actually a Euro-machine, based on the Mondeo, and even without mods handles well. The 15 I drive has the base 4-banger that puts out more than enough power to keep the average driver happy. I've never put my stopwatch on it but my seat of the pants 0-(well, let's say) 60 runs is in the 8-second range. That aside, the imports are now eating the domestic market for cars for lunch. And, they are also offering better SUVs, as well, for the most part, though if Ford straightens out the problems with the Explorer, it will compete head-to-head with any of them. I agree with your comments about Ford playing catch up. They bailed on the Ranger in 09 and only came back with it last year. The only real competition to it was the Toyo offering and that was dated. Now, Ford is coming on, but the lost about a decade's worth of market. Sometimes you have to wonder who is telling who what about what the market wants.
Jimmy Dinsmore wrote on December 25, 2019 - 11:02am Permalink
Hmmm, this sounds like maybe a good opinion piece for me to write . . .
digitaldoc wrote on December 25, 2019 - 12:36pm Permalink
Ford needs to reexamine this getting out of the car business strategy. Rather than push up Ford truck/SUV sales, many of those ford car owners are replacing them with Hyundais, with the Elantra sales recently pushed up. Perhaps this is also due to the uber lackluster Ecosport at the bottom end, but a new Focus would be a nice stopgap to offer Ford buyers, and not send them elsewhere. I drove a Ford Focus as a rental for 2 weeks back in 2004, and my conclusion was that it was a really nice car.
Francis A Rauh wrote on September 30, 2021 - 2:13pm Permalink
the only problem with focus is the automatic clutches that shutter,. Ford has never fixed this issue. We own a 2017 se Hatch and had the clutches replaced once under warranty,but now the problem is back and my dealer tells me ii's within Fords spec. just live with it. Other than that it's a very spiorty fun to drive Hatch.
Jeffrey J Hopkins wrote on February 28, 2020 - 7:14am Permalink
Alot of people want cars, not trucks, SUVs and crossovers. Believe me Ford will lose business. People will look elsewhere. I happen to be one of them that will look to other automakers when the time is right to buy another car
JES wrote on March 12, 2020 - 8:03pm Permalink
As much as I love the idea of the Focus making its way here in some form, let’s face it: we’ve been out-voted by the majority who are addicted to their oversized SUVs, and Ford wants us join the SUV mania! I do not like most SUVs. I find most to appear too big, inelegant, and also have a harder time “feeling” my surroundings when I’m that high up. We’ll see if the Ford Kuga ST (a plug-in hybrid!) makes it to the US, but Ford continues to cater exclusively to the SUV crowd, I’ll interpret that as Ford saying that the Ford Edge is a “take it or leave it” situation, and my response will naturally be “I’m not in the market for a God-damned SVU”! I will also interpret Fords actions as saying “do not replace your 2012 Ford Fusion Hybrid with another Ford.” There is always the Honda Civic or Subaru Impreza lineup. If Ford will not convince me to buy an SUV, ever. If they don’t want my business, I will keep in mind to look elsewhere. I know I’m not the only motorist or automobile enthusiast who feels this way.
Jimmy Dinsmore wrote on March 16, 2020 - 7:44am Permalink
I agree with you. I think Ford and all carmakers are making a short-sighted mistake by getting rid of all cars. I would be fine with thinning the herd a little, but I think, especially smaller cars for younger buyers, are still much needed and wanted.