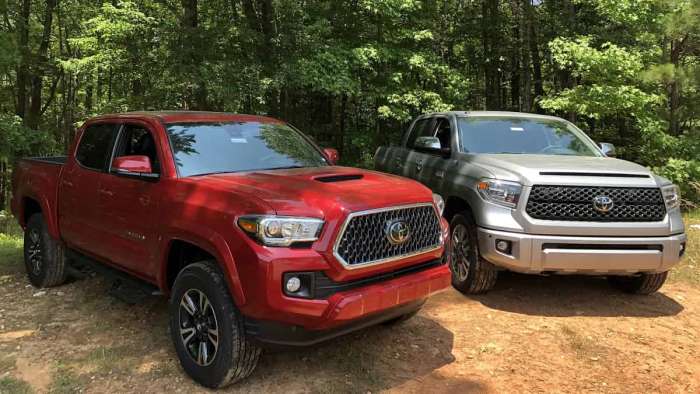 We polled Toyota owners on their current odometer readings. You will not believe the high mileage that Toyota Tundra and Tacoma owners, along with other Toyota model owners, have on their vehicles.
Advertisement

When you think of the Toyota brand, you might first think of its reputation for quality and dependability and reliability over the course of 10 to 15 years. Statistically speaking, a Toyota is as close to a mechanical sure thing as any other automotive brand on the market.

In fact, Road & Track recently looked at the Top 15 vehicles in the automotive industry that original owners keep for 15 years or longer. You may or not be surprised to learn that Toyota occupied 10 of those 15 coveted slots.

Six of the top 7 slots went to Toyota, including the Toyota Highlander taking the top spot. Think about owning the same vehicle for 15 years or more, and what an amazing accomplishment that is for most drivers. That is incredible. Landing solidly in the Top 5 was Toyota Tundra. Many of us know how passionate and fiercely loyal Tundra owners are to their trucks and to their brand.

According to the study, 14.1% of original Tundra owners keep their trucks for 15 years or longer. This got me to thinking about actual real-life people and the trucks they drive and become part of their families.

I observed a discussion on high mileage vehicles with members of a large online Toyota Tundra forum. I was surprised, but I guess not all that surprised, to hear of the longevity and reliability that Tundra trucks, as well as other Toyota models, have over the long haul. Just look at some of the responses from proud Toyota Tundra owners.

And then there was this exchange between two Tundra forum members. Person 1: “2012 Crew Cab Platinum with 136k and running great.” Person 2: “That's low mileage for a Tundra.” Person 3: “Is just breaking in. Some people I know with Chevy, Ford and Dodge are panicking about their trucks at 150k. I’m not worried. Lol. Great trucks, I only own Toyotas. Love them!

Also, let’s not forget about our friend Victor Sheppard in Louisiana, who had over 1 Million Miles on his 2007 Tundra when Toyota offered to buy it back to study it.

Toyota Tacoma can run up the miles too

Perhaps the most famous Toyota Tacoma of all belongs to Mike Neal from North Carolina. Mike has logged over 1.2 million miles with his 2008 Tacoma Access Cab. Over 1.2 million miles! If you think the mileage itself is impressive, you should see the “billboard” he keeps on the back of his Tacoma at all times. This is the best free advertising for Toyota overall durability the company could ever ask for.

All Toyota models can have high mileage

What was most interesting to me were the owners of multiple Toyota vehicles and how they are still going strong with hundreds of thousands of miles of windshield time.

These personal accounts only add to the mythology that is Toyota quality, reliability and dependability. This is reason #1 people consider and buy the Toyota brand.

I think one of the forum members, Michael, summed things up nicely in a way I had not previously considered. “I don’t think you can consider a Toyota high mileage until you hit a half million.” Well played, sir. Well played.

Thanks for reading my story everyone. Please bookmark Torque News Toyota News/Reviews here for my latest news in the world of everything Toyota. See you in the next story in which I will discuss Why You Need Traction Control in Your 2019 Toyota Tacoma and When to Turn It Off.