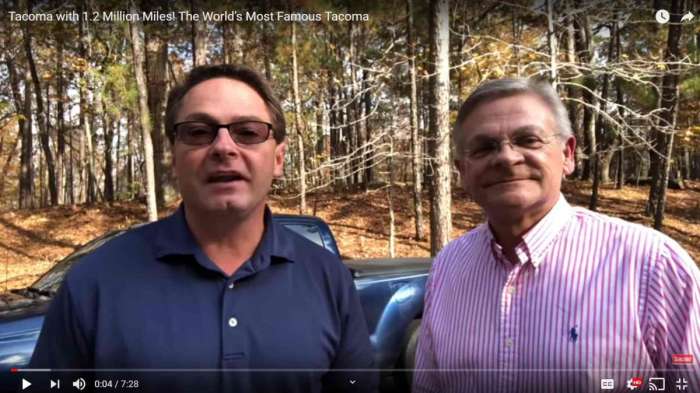 The Man Behind the One Million Mile Tacoma

A 2008 Toyota Tacoma has 1.2 million miles. But that’s not the whole story about this one million mile Tacoma. Not at all.
Advertisement

“Guess how many miles I have on the Tacoma you sold me?” This is the text I got three years ago from my customer, Mike Neal, who is the owner of this one million mile Toyota Tacoma. I sold him his 2008 Toyota Tacoma 4-cylinder, 4x2, Access Cab in November 2007. Mike and I texted back and forth until I finally got him to reveal he had 726,000 miles already! I couldn’t believe it. How could anyone put on that many miles in such a short time?

Fast forward to 2018. Last week in fact. Mike and I met to film a video for my YouTube channel updating the world on his current mileage and the status of what I am calling “The World’s Most Famous Tacoma.” He now has logged 1,218,880 miles, and his Tacoma is still running strong! But how could this be? Where does Mike drive his Tacoma? What does he do with it?

You see, Mike has what I refer to as one of those “really important jobs.” He delivers nuclear medicines used in PET scans for cancer patients. These crucial imaging tests detect abnormal activity in the body, and can tell patients if their condition is improving or not. People count on him to deliver this valuable product, regardless of weather or any other conditions or situations.

I asked Mike why he decided to buy a Tacoma in the first place eleven years ago. “The job I had required a pickup because we carry heavy radioactive loads. So I did online research. The only truck that would do what I want and that would be as reliable came up to be a Toyota. And it came down to, I was afraid to get anything but a Toyota!”

We all know that Toyota comes with the well-earned reputation of quality, dependability and reliability. We also know Tacoma’s are known for lasting for hundreds of thousands of miles. In fact, the running joke is that you just can’t kill a Tacoma. But Mike Neal’s marathon machine takes things to an entirely different level.

Sure, he’s had to replace certain parts of the truck over the years. Alternators, batteries, coil springs, and others. One of the most unbelievable facts was that he didn’t have to change his original spark plugs until 704,000 miles! It still has its original transmission. The biggest thing he’s replaced is the engine, which he switched out at 880,000. Mike recalls, “My mechanic said it only needed a head gasket. It didn’t need a new engine. But I decided instead of fixing only that, I would just replace the whole thing.”

Mike cares deeply about his job responsibilities and the patients who rely on his deliveries, and his thoughts weren’t focused on setting records. “At the time, the most important thing was ensuring I met patient deadlines. People were counting on me. The last thing on my mind was making it to a million miles.”

It is selfless thinking like this that makes me proud to be part of this 2008 Toyota Tacoma’s history and its amazing story. When I initially asked Mike to do a follow-up video, he politely declined. “I don’t think people will care about my truck at all.”

It’s been six days since I posted my video “Tacoma with 1.2 Million Miles! The World’s Most Famous Tacoma.” It’s already received over 250,000 views! Mike, I can assure you, people do care!

As one viewer wrote, and I think we can all agree, “Great guy! Great truck! Great story!”

Just out of curiosity, what truck do you drive and how many miles does it have? Please share in the comments section below for discussion.