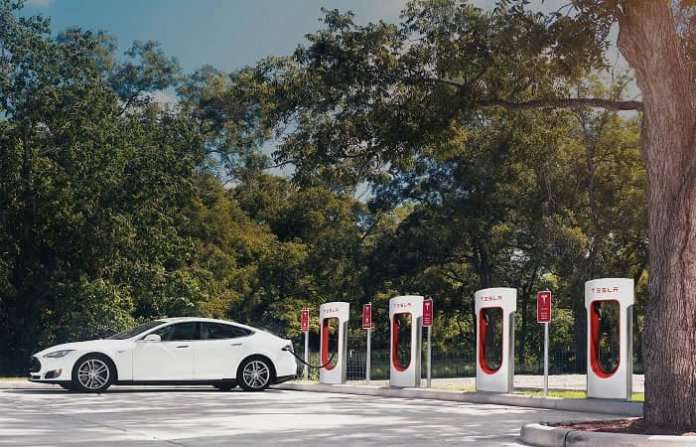 Tesla's head start has allowed it to build a fairly comprehensive charging network that today gives them an advantage in the EV industry. But where does that leave 3rd party charging networks for vehicles like the Bolt EV? And what is going to happen in the future?
Advertisement

Almost all car manufacturers with the exception of a few out of Japan have backed the near universal CCS (Combined Charging System). This standard was developed by a consensus of vehicle manufacturers through the Society of Automotive Engineers. Of which even Tesla is party to the development of this standard. CCS was developed later than Tesla's supercharger system or the Japanese CHAdeMO standard and hence charging networks using CCS have had a late start. But due to investments by private companies, public-private partnerships (some forced like the VW settlement) and in some cases fully publicly funded CCS charging stations, there have been stations popping up very quickly. So quickly that the number CCS plugs are now approaching that of Tesla's even with Tesla's recent rapid expansion in response to the Model 3 launch.

As a manufacturer with something to prove Tesla lead the way in installing its own charging infrastructure. In fact, in 2013 it quietly unveiled CHAdeMO adapter for Model S.

In the early days of the supercharger network Tesla appeared to be working to build a network that connected dots on a map. They seemed out to answer the question “can I drive an EV to [insert remote part of mid-western US state here]”. This made a network that looked good on a map and helped make EV adoption look possible. However this also made some supercharging stations in high demand area's overcrowded and some supercharging stations in more remote regions see very little traffic. Tesla appears to be working to resolve this and are now adding larger multi-stall stations in high demand locations. But continue to be very determined to reach all nooks and crannies in all regions where Tesla's are sold regardless if demand is there for some of these stations or not. At least yet.

Even today if I think about the longest road trips I've ever taken in my life the 3rd party infrastructure is already in place to make a vehicle with a range like the Bolt EV viable. The infrastructure exists today for someone like me to drive a car like the Bolt EV from Ontario, Canada all the way to Orlando, Florida and back again. And despite the lower available charging power at currently installed CCS stations the Bolt EV would only take a few hours (10%) longer to complete this journey than the original Model S 60 today. So the CCS charging standard has come a long way in a short time.

Speaking of charging speeds CCS charge stations today are mostly limited to 50 or even 25KW charge rates (there are some in Europe that are 100KW). While Tesla superchargers have capacities of up to 145KW. On the surface this sounds like a charging network that is nearly three times faster than CCS. However even though the capability is there that doesn't mean that all EV's can use it. Most Teslas today cannot fully utilize 145KW. And the ones that can will only do so for a small portion of their battery state of charge. DC fast charging doesn't happen at a constant rate. Batteries can accept a higher charge rate when the battery charge is fairly low and slow their charge rate as their state of charge increases.

So as of today most Teslas charge about an average of 50% faster than an EV like the Bolt EV to 80% when connected to a 50KW CCS. Still a big advantage for Tesla today. Due to the lower efficiency of the original Model S 60 the Bolt EV can charge an nearly the same miles per hour rate. The 145KW capacity does give Tesla some room for growth and future use. Though the CCS standard is going through an update this year that allows up to 400KW charging. And 3rd party companies like Chargepoint already plan to offer charging solutions that can output that capacity as soon as this year. Automotive companies like VW's Porsche and Audi brands have already announced cars that should hit the market in the next couple of years that can utilize this capacity. And Porsche has already opened its first 350KW charging station in Europe. There are rumors that Tesla might also launch a supercharger 2.0 that supposedly can handle up to 360KW.

So which approach is better? What does the future hold?

In the early days of the EV revolution Tesla's way certainly looks like a clear winner. Though eventually investors are going to want Tesla to turn a profit and will the supercharger network begin to loose some of its luster as a result?

As 3rd party EV networks become comprehensive, charging providers will have a self interest in providing good service and ensuring their networks are reliable with little downtime. Downtime at a popular charging spot means loss of revenue. And poor service means that people will take their car to another competing 3rd party provider. This means that 3rd party charging providers will have a vested interest in providing a good charging experience into the future. With 3rd party organizations coming out with 400KW DC fast charging will Tesla have the resources to keep up in the future and continuously upgrade, upkeep and expand their network? Or will Tesla find one or more partners to help maintain the supercharger superiority?

Some argue that public-private money such as the forced VW settlement that requires VW to fund the building of EV infrastructure works against 3rd party private providers as these providers now have to compete with a subsidized charging network. If GM were to fund the CCS network would this theoretical network they help build have a long term viable model or would this only serve to stifle 3rd party private investment? Or by companies like GM simply building EV's (and not charging networks) create more demand for 3rd party charging networks and thereby improving the business model? If they build them will they come?

Tesla has the lead today. But standards like CCS have come out of nowhere in just a few years and have the backing of most of the automotive industry. There are a lot of unanswered questions and I'm certain that EV charging infrastructure will be the subject of many business studies now and into the future.

Also See: Even with cars like Model 3 and Bolt EV there is still a long road to travel.

Charlotte Omoto wrote on August 18, 2017 - 1:33pm Permalink
I like the fact that Tesla put in Superchargers and Destination Chargers to "connect the dots". I wonder about the logic of putting chargers in "area's with a high density of EV adoption." Most EV owners charge at home, one of the great advantages of owning an EV. I don't need a charger within 100 miles of home. Even with smaller battery EVs, I doubt that an EV owner needs a charger within 50 miles of home. I did once try out a 3rd party charger and was amazed at how much it cost! Many Level 2 chargers, and of course, Destination Chargers are free. I don't understand how 3rd party charger providers can make money when there are many free chargers.