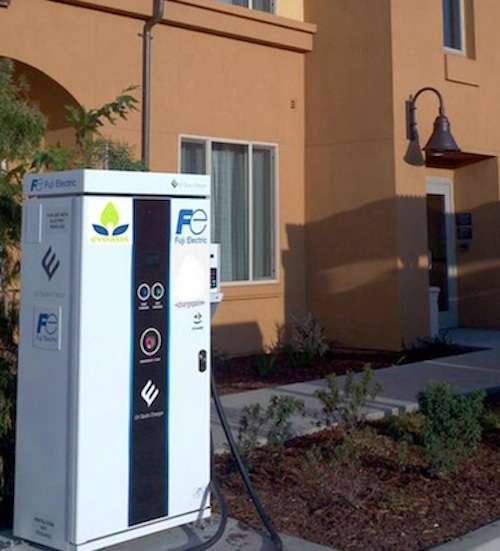 Edison, N.J., and Campbell, Calif., November 8, 2012 – Electric car charging station network operator, EVOasis, has become the first company to install the first publicly available DC Quick Charging station on the ChargePoint network. The new electric car fast charging station was manufactured by Fuji Electric and supports the CHADEMO protocol used by the Nissan Leaf or Mitsubishi i-MiEV, and was installed at the Residence Inn by Marriott in San Juan Capistrano, California. The 25 kilowatt charging station is open to the public and is convenient to the I-5 corridor just south of Los Angeles.

The Fuji Electric charging station used for this installation will provide a full charge in approximately 60 minutes. Fuji's charging stations have been installed around the world in hundreds of locations, but this is the first time for one to be integrated into the ChargePoint network.

Typically the Nissan Leaf is said to charge, on the fast charge port, to 80% in 30 minutes. The charging time with this station is a bit longer but also provides a full charge. The difference is that the Fuji station runs at 25 kilowatts versus the 50 kilowatt rate of other CHADEMO charging stations. Fuji says this adds 11 minutes to the recharge time for charging from 23% to 80%, or adds 7 minutes for the time to charge from 40% to 77%. While this adds to the charging time, there are benefits to charging station network providers that should make for wider deployment of this charging station over higher powered units.

Fuji notes that while the SAE DC Fast Charging system has been approved, the market for CHADEMO fast charging stations is still quite large. There are maybe 30,000 Nissan Leaf's, and other CHADEMO based electric cars, existent world-wide currently with more being sold every day. On the other hand, sales of electric cars supporting the SAE DC Fast Charging system will not even begin until 2013-14. The long-running controversy between proponents of the CHADEMO and SAE DC Fast Charge systems was settled when the SAE system was approved, but it's expected to take several years for the SAE system to supplant CHADEMO. In the meantime the market for electric car fast charging is rapidly changing with other fast charging standards entering the field.

EVoasis offers a charging stations that include full service, with driver comforts including food and beverage service, wireless Internet access, and a drivers lounge, along with solar canopies and on-site electrical energy storage.

The EVoasis website implies the station in San Juan Capistrano is the first of a series planned for the areas between Santa Barbara, Los Angeles and San Diego.

“Fuji Electric is thrilled to be partnering with Residence Inn San Juan Capistrano and Evoasis to offer electric vehicle owners a fast and convenient charging method,” says Phil Charatz, president and CEO of Fuji Electric Corp. of America. “The integration of ChargePoint in our DC Quick Charger enhances the user experience, and we are proud to be the first publicly available DC Quick Charger on their network. We are committed to the EV industry, and will continue to take every opportunity available to further the development of the EV infrastructure in the United States.”

Tony Williams wrote on November 13, 2012 - 12:11am Permalink
Congrats to EV Oasis and ChargePoint.
Chris wrote on September 22, 2016 - 5:21am Permalink
Electway's 25kW CHAdeMO charger seems to be more portable and smart.
Tony Williams wrote on September 22, 2016 - 9:09am Permalink
This Fuji charger, serial number 1, was commissioned in November 2012, the same month I traded by second and last Nissan LEAF in on a 2012 Toyota RAV4 EV. I was part-owner of this first DC charger on the ChargePoint network. This machine was retired in spring 2016 after 3.5 years of use. There is no longer any charger at this location.