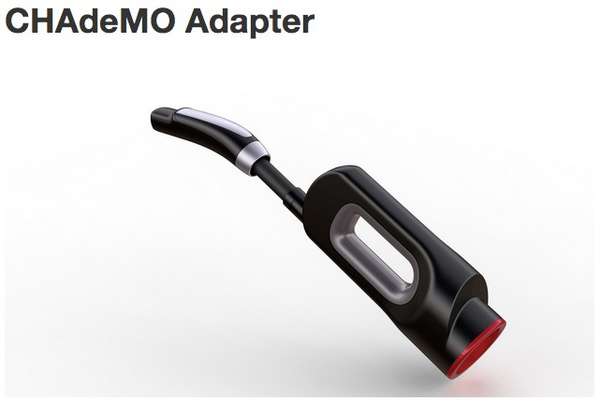 The forces for CHAdeMO just got a big backer in the form of Tesla Motors, the second largest seller of all electric cars in the world behind Nissan who also supports the CHAdeMO fast charging standard.
Advertisement

Tesla Motors has quietly added a new item to the Tesla Model S accessories that adds support to CHAdeMO fast charging stations. So far Tesla's position in the fast charging standards debate has been to say their proprietary system is better than all the other systems. And, indeed, the Tesla Supercharger is what makes the Tesla Model S the first all electric car that can credibly be used for road trips. By making a CHAdeMO adapter available to customers, Model S owners will now be able to drive in areas where Tesla hasn't built Supercharger stations.

The CHAdeMO adapter plugs into the Supercharger port on one end, and provides a CHAdeMO socket on the other.

In-between the two will be some computerized control that speaks the CANBUS based CHAdeMO control protocol, informing the CHAdeMO charging station what the required power levels are. The other side of the adapter will of course talk to on-board vehicle systems to learn the required charging details.

Public CHAdeMO charging stations operate at peak charging rates between 25 kilowatts to 50 kilowatts (or so). This is much lower a charge rate than Tesla's own Supercharger system, which supported a 90 kilowatt charge rate initially but is being expanded to support 120 kilowatts. Tesla claims that at a CHAdeMO charging station, like the ones along the West Coast Electric Highway in Washington and Oregon, a Model S will gain 70 miles of range per hour of charging. While that's a significantly fast charge rate, it means a full recharge of the 85 kilowatt-hour Model S would require 3-4 hours.

Typical level 2 charging stations run at a 6-7 kilowatt maximum charging rate, typically 208 volts and 32 amps. At such a station the typical electric car gains about 20-25 miles of range per hour of charging.

The adapter shown on Tesla's website is for the North American market. A different adapter will be required for European and Asian Model S's. The adapter is compatible only with those Model S's that have Supercharging enabled. All of the 85 kilowatt-hour Model S's support Supercharging, which is an option on the 60 kilowatt-hour version.

The adapter costs $1000 by itself. Enabling Supercharging on a 60 kilowatt-hour Model S before delivery makes the price $2,400, and doing so after delivery the price becomes $2,900.

The adapter won't be available until Winter 2013.

This move has some potential significance to the larger electric car charging market. The two largest sellers of all electric cars, Nissan (Nissan Leaf) and Tesla (Tesla Model S), are now supporting the CHAdeMO standard. There are no electric cars available on the market today that use the other standard, Combo Charging System. This winter, the Chevy Spark EV is expected to be the first electric car available supporting that standard, and will be followed by the BMW i3. Both of those cars are being made in limited quantities.

This means that in terms of market penetration CHAdeMO will remain far ahead of the Combo Charging System for the foreseeable future. Both the Leaf and Model S are selling in the 10's of thousands of cars per year, while we have yet to see what the sales rate for Combo Charging System cars will be.