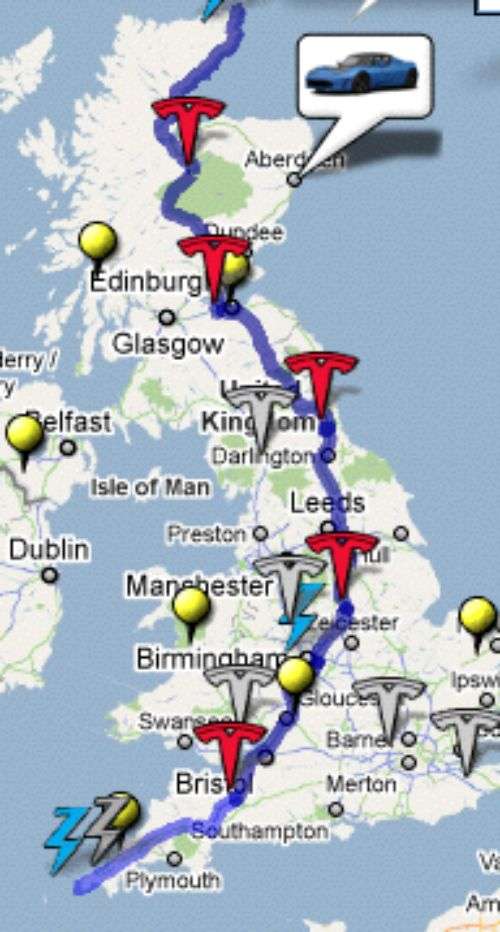 The historic outing will journey from John o'Groats on the northeast tip of Scotland to Land's End on the southwest English coast, utilizing the Roadster's significant range along with the network's high power charging stations. Kevin Sharpe, founder of Zero Carbon World, will join EV expert David Peilow in an electric blue Tesla Roadster taking turns at the wheel. They expect to reach Lands End on Sunday in Sharpe’s Tesla, pausing to charge up at Tesla HPCs along the way.

Each station is privately owned and available for public use, either a not charge or for a nominal fee. The network resulted from a grass-roots effort by Roadster drivers and forward-thinking hotels and resorts. Now Tesla owners can enjoy their cars' breathtaking acceleration and superior range as they tour Great Britain, and recharge while taking lunch, relaxing or working out, or indulging in an overnight accommodations.

Tesla's HPC delivers 70 amps of electricity, able to fully charge a drained battery in three hours or top off a partially-discharged battery in less than an hour.

"After crossing the country on a single charge in a Tesla Roadster, I realized that national coverage would require surprisingly few charge stations," said David Peilow. "I worked out the minimum number of sites for all of Britain to be reached, and found locations where drivers would be keen to stop and recharge. Once the benefits of hosting an EV charger were explained, most sites jumped at the chance to have one."

"The new network embodies Zero Carbon World's vision of a carbon-free society, and shows that eliminating fossil fuel emissions is well within our grasp," said Kevin Sharpe. "The network empowers people to make choices that are pleasurable and consistent with their values of environmental stewardship. I'm thrilled to be the first EV owner to make the drive from John o'Groats to Lands End."

Stay tuned to the historic venture at teslamotors.com/endtoend which will provide a real time map, links to twitter feeds and other information.