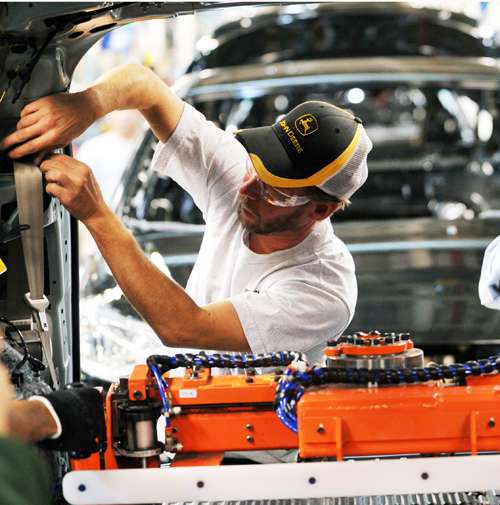 Ford is increasing North American production capacity by 200,000 units and even cutting back summer furloughs of workers to meet rapidly rising demand, showing the remarkable recovery of auto market since 2008.
Advertisement

This boost comes on the heels of a 400,000 unit uptick last year, while cuts to the usual two week summer shutdown will add another work week and 40,000 units to capacity.

In addition, the brand plans to add another 3.500 hourly workers at its North American plants during 2013.

“To meet surging customer demand for our top-selling cars, utilities and trucks, we are continuing to run our North American facilities at full manned capacity, and we will add 200,000 units of annual straight-time capacity this year,” said Jim Tetreault, vice president of North America Manufacturing. “Approximately 75 percent of our plants are running at a three-crew, three-shift or four-crew pattern in order to ensure we’re getting more of our products into dealerships.”

The surge is a result of hot sales performance from the Ford Explorer, Ford Fusion and Ford F-Series pickups.

In the image above, Ford employee John Bizek works to install electronic components on a C-MAX hybrid at the Michigan Assembly Plant. (Image courtesy of Ford)

Having hired over 8,000 salaried and hourly employees in the US last year, Ford is well on its way towards its planned creation of 12,000 jobs across the country by 2015, over the course of three short years.

That is something easily referred to as economic and industrial progress.