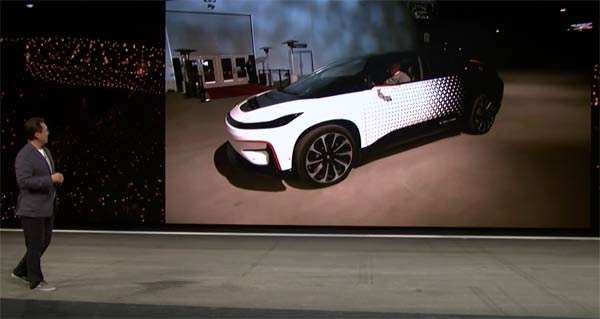 Faraday Future who recently unveiled their FF 91 prototype at CES 2017 to much applause may seem to have a winning vehicle on their hands, but not everything seems as rosy under the surface.
Advertisement

The FF 91 prototype which was shown at CES 2017 was by all intents looked to be the SUV of the future, with company executives and most recent investor billionaire Jia Yueting showing off the technological advances of the vehicle, but the demonstration seemed to raise more questions than answers according to businessinsider.com. Once touted as a company that was a 'Tesla-killer' the demonstration promised much, but suffered from technical hitches and although the design look fantastic and the promise of a superfast vehicle, the demonstration boiled down to only a future concept more than anything else. The FF91 was meant to demonstrate its auto parking facilities, but after failing to do so was just moved across the stage. Also, many of the vehicles interior workings were not shown on the live video feed.

The company has 1,400 employees, some of which were headhunted from Silicon Valley and Detroit's finest shows potential future worth, but rumblings from inside of the company now seem to be boiling over into the mainstream. Six senior executives have said to have departed since last spring, including the global CEO who departed just before CES. The other worry is the mounting unpaid bills and cash shortages which seems to be the crux of their problems.

The company was founded in 2014 by investor Jia Yueting and Faradays senior vice president Nick Sampson. Jia made his millions in the Chinese electronics industry and Sampson coming from one of the engineering teams at Tesla before starting up Faraday Future. Publicly it seemed Jia was the only main investor and a CEO is still not officially listed on their website. although some CEOs have been tentatively appointed, it seems that Jia is acting as the unofficial CEO over the company at present.

Intercontinental rumblings
Jia Who is the owner of LeEco says that Faraday futures is a subsidiary of LeEco and this is where the problems seem to stem from in some ways. LeEco seem to be paying for everything but the clash of cultures doesn't seem to mix, even when the original name of Fara Faro was put forward and turned down by the Americans, who eventually decided on the name Faraday Future. One insider said, 'There were times that the Beijing team would come out and learn what we were doing but were working on their own designs and then they would go back.'

There were early plans to build a $1 billion factory off the Las Vegas strip covering 900 acres and employing 4500 people, but it seemed work on this project stopped almost straight away, with plans to resume in 2017, but nothing definite.

We need money fast
It seems the company are still on a spending spree, but still have loads of unpaid bills needing constant cash injection. 'There was no visibility about when the money would arrive — we were told to continue making commitments to suppliers' said a company insider. Other Chinese investors seem to be jumping on board with a $1 billion convertible bond raised last year in China, but it hasn't seen the light of day in the US. In a letter to employees Jia stated, 'Our cash demand ballooned. We got overextended in our global strategy. At the same time, our capital and resources were in fact limited.'

The overriding factor for Faraday Future seems to be with money and if future investments can be gained, then their electric vehicles could have a future, especially with around 64,000 reservations for their cars after CES, but it seems only 60 people actually put down a $5000 deposit. If the company can get the cash flowing, with what they've promised up to now they could have a niche market in the EV world, but as it stands at the moment there will have to be quick about it before the vehicle becomes just one of those prototypes that could have been.