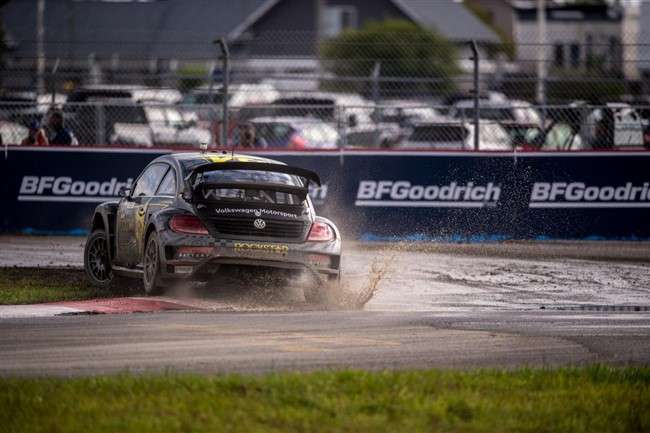 The Volkswagen Andretti Global Rallycross team clinched its second-straight manufacturer's championship as Scott Speed had a sensational weekend behind the wheel. Speed took both series races Saturday and Sunday at Atlantic City's Bader Field where the race series setup quarters for the weekend.
Advertisement

While Scott Speed seemed to be pretty much on cruise control during this weekend’s racing at Bader Field in Atlantic City, N.J., his teammate Tanner Foust was running into traffic on the narrow rallycross course. Speed and Foust drive for the Volkswagen Andretti Rallycross team.

Everything looked promising when the doubleheader event started late Saturday afternoon. Foust was atop the driver championship points board, closely followed by Speed, only 26 points behind. As the weekend’s racing progressed, Speed looked – and was – unstoppable, while Foust ran into hurdle after hurdle, making his time on the track one frustration after another. Meantime, Honda was making a go of things. Honda claims podium in GRC event. Subaru was also having a progressive weekend as one of its team claimed a podium during Saturday's activities. Sunday proved far more frustrating. Subaru has tough day at Atlantic City.

Speed claimed victory in Race 1 Saturday and Race 2 Sunday on the Bader Field circuit. As he did last year, Speed used Atlantic City as a springboard back into the championship points lead. The dual victories also secured Volkswagen’s second straight manufacturer’s championship in the series, making VW the only automaker to win multiple champion titles.

Speed set sail from the first flag, coming away as the quickest qualifier for Race 1, Saturday morning. He did have one hiccup during the weekend when he came in second during the Heats. The bobble was a second-place finish for the pilot of the No. 41 Oberto Circle K Beetle GRC.

“This was an incredibly important race weekend for us, and we walked out of Atlantic city with about the best result we could have hoped for. The Beetle GRC is on rails, and it’s a testament to this crew and how hard we’ve all worked to build a super-competitive race team,” Speed said in an interview.

Honestly, though it sounds like Speed was on cruise control all weekend as he dominated the proceedings that was not the case. A pileup in the first corner reshuffled the running order and Speed had to set out chasing the leaders. With just two laps to go, he executed a thrilling pass, moving into first place to earn his first winner’s trophy of the weekend. It was one of the season’s most exciting races, so far.

Speed, the current series champ, had a quieter Sunday. Again, the quickest qualifier, he controlled each of his races from the front row. He earned wins in each even (qualifier, semi and final), winning the maximum number of championship points.

His teammate, Tanner Foust, who also was quick, fell victim to a series of incidents that left his weekend anything but lucky. For example, in Saturday’s final, Foust and Speed were side-by-side on the starting grid. On the first lap, there was a 10-car pileup that forced the pilot of the No. 34 Rockstar Energy Drink Beetle GRC to stop on course.

Sunday was equally frustrating for Foust. About the only thing he was successful at was being in contact with other vehicles. It kept the field pretty clogged up for him, and he didn’t have any clear running, instead of fighting with slower cars on the tight Bader Field circuit.

“With 10 cars on such a tight track, there’s bound to be contact, but this was a particularly difficult weekend for some reason. We'll move on to the next round and look to bounce back,” Foust said.

The near-perfect weekend in Atlantic City left Speed, the leader in the championship standings. He also retook the title of the winningest driver in Red Bull Global Rallycross history from Foust, an honor they have traded all season.

With three races remaining this season, as noted, VW clinched its second manufacturer's championship title. The Beetle GRC has proven to be the car to beat with wins in six of nine races this season. The VW Andretti Rallycross team has also demonstrated it is the one to beat this year.

Drivers, Teams Have Time Off

The racers will have a couple of weeks off as the series’ next race is a doubleheader scheduled in Seattle Sept. 9 and 10. The event will be broadcast live on NBC live each day at 4:30 p.m. (Eastern Time).