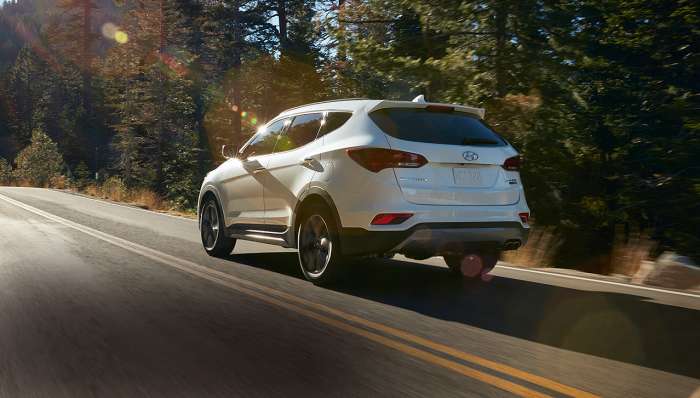 Hyundai, led by the Santa Fe and Santa Fe Sport, set a new sales mark in September. And, the Veloster also scored a notable sales win, as well.
Advertisement

Led by the sales of the Santa Fe and Santa Fe Sport, September sales for Hyundai hit a record 66,610 vehicles. Sales for the month were up a total of 4.1 percent. Meanwhile, sales on the other side of the building at Kia, Hyundai’s subsidiary, were off a bit. According to its monthly sales report, Kia was off 1.2 percent.

In a departure from much of the automotive world, a sedan was one of Hyundai’s sales leaders. For the first nine months of the year, crossover sales have held onto their torrid pace, even as overall sales have begun to slow a bit. Sales of the automaker’s subcompact Accent sedan were strong. They more than doubled to 7,495, said Automotive News.

The Veloster compact crossover sports coupe also had a super September, gaining 50 percent Sales hit 3,168. Meantime, the Santa Fe and Santa Fe Sport crossovers were up a total of 5.6 percent for the month to 11,350 vehicles.

The Genesis brand had a solid first sales month of 1,211 vehicles in the U.S. The brand, which was formerly part of the Hyundai lineup before the automaker announced it was splitting it out and establishing it as a separate luxury nameplate, consists of the G80 and G90. The luxury G70 was available in August, while the G90 went on sale in September.

Derrick Hatami, national sales vice present for Hyundai Motors of America, was enthusiastic about the automaker’s September performance. “Strong performances by our Santa Fe and Santa Fe Sport, in addition to the subcompact Accent led the way to yet another record month.”

The Genesis brand is also stirring dealer excitement, Hatami noted. “Dealers are excited to hae our new Genesis G80 and G90 models arriving as we start the fourth quarter,” he said in a statement.

With its Sportage crossover and Forte small-car family leading the way, Kia had a minor slip in September. Overall sales were down just 1.2 percent as the September numbers dipped to 49,220 vehicles.

Sportage and the Forte line were the stars of Kia’s sales universe in September. Sales of the crossover Sportage were up 57 percent, while sales of the Forte small-car family jumped 53 percent. And, sales of the Rio subcompact were up 45 percent to 2,141 vehicles. That two car families were solid sales achievers in the face of a market that has been dominated by red-hot crossover sales turned out to be a surprise.

For the year, Hyundai sales are up 1.6 percent while Kia is up 3.3 percent