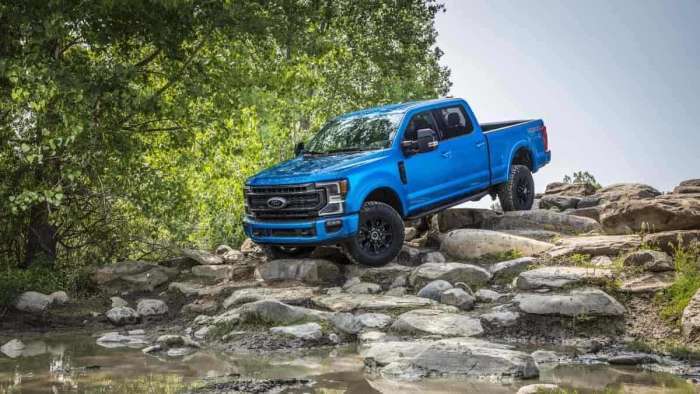 Ford has issued a smallish recall that covers about 30,000 F-Series Super Duty pickups. This is the second recall covering Ford's F-Series pickups since last month. Other Ford pickup recalls covered F-150s in the "Rust Belt."
Advertisement

The Ford Motor Co. has recalled 2019 F-Series Super Duty pickups for the second time in six weeks. This time, though, the recall is much more limited than the 550,000-truck recall last month.

Trouble In The Rear-Axles Assembly

According to the recall notice, the automaker says the call back has to do with trouble in the electronically locking rear-axle assembly. Ford says that there have been no injuries reported related to this recall.

The defect arose after steel that doesn’t meet Ford specifications made it into the fabrication of passenger-side axle shafts on four-by-four models. Because the steel isn’t up to Ford standards, the passenger-side axle shaft assembly could fracture. In turn, the facture could lead to a loss of two-wheel-drive power and the truck could lose its ability to hold Park. Indeed, if the driver did not apply the parking brake when the fracture occurred, the pickup might move unintentionally.

Watch for news about the Ford F-Series Super Duty Pickups, F250 and 350, plus the Ford F150 and other Ford trucks. Click To Subscribe To Torque News YouTube Channel For Daily Ford and Automotive Industry News Analysis.

Ford dealers will inspect passenger-side rear axle shafts on the affected trucks. They will replace axles shafts of Ford F-Series Super Duty models with the suspect batch code. Ford is also advising truck owners set the parking brakes whenever they place their vehicles into Park.

For further information, owners can contact Ford Customer Service at 866-436-7332. The Ford ID number is 19S31. Or, owners can contact the National Highway Traffic Safety Administration (NHTSA) at 888-327-4236. The call is toll-free. Owners have the option of contacting the agency through its website NHTSA safety website.

The F-Series Super Duty recall is the second Ford pickup recall in the last six weeks. In the first recall, the automaker has recalled more than 550,000 Ford F150 pickups to check problems with seatbacks. The F150 is Ford's half-ton pickup.

Because it is missing an essential part of the seatback mechanism, the seat cannot restrain an occupant, increasing the risk of injury in a crash. Meantime, the automaker apparently has been taking a close look at safety as it has also recalled more than 100,000 F150 pickups to ensure that corrosion can't find a place to start.

Sources: NHTSA. NHTSA stands for the National Highway Traffic Safety Administration. The agency tasked with enforcing pickup safety standards. Though recalls are voluntary, NHTSA still keeps close tabs on them to ensure recall safety standards. The second source is The Ford Authority which is a major independent information source.