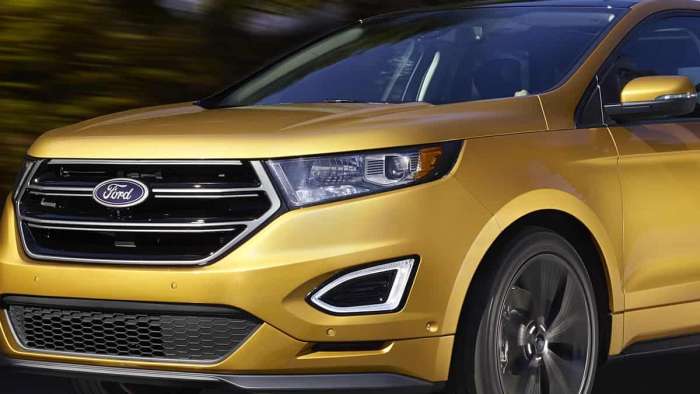 One of Ford's latest recalls is targeted at 21 states where corrosion from salt during the winter is a major problem. The automaker has recalled 100,000 cars for this callback. Canadian vehicles were also included.
Advertisement

Believe it or not, targeted auto safety recalls aren’t all that rare. For example, the Takata exploding airbag inflator callback targeted at specific areas of the nation that were warm and humid. The reason: the company’s airbag inflators made in its Mexican factories tended to be overly sensitive to warm, moist air. The inflators’ poor seals also allowed debris accumulate in each device. This is the heart of the Takata safety callback.

And, in a recall that is reminiscent of the targeted Takata airbag callback, Ford has, this time, focused a 100,000-car/SUV recall on 21 cold-weather states in the northern tier of the country and Canada. The states are Connecticut, Delaware, the District of Columbia, Illinois, Indiana, Iowa, Maine, Maryland, Massachusetts, Michigan, Minnesota, Missouri, New Hampshire, New Jersey, New York, Ohio, Pennsylvania, Rhode Island, Vermont, West Virginia, and Wisconsin. All of these states are in the so-called “Rust Belt.”

This is one of Ford's safety-conscious recalls. Its F150 series was also recalled last week to repair a problem with seatbacks in nearly half-a-million F150 trucks.

The vehicles recalled include:

There is a real problem with salt, though. Not only does it like to eat the snow and dispose of it by turning it into slushy water, salt also likes to eat metal car parts. Indeed, it just loves to get up into places that you can’t reach or see and it loves to cause the rusted-out cars, trucks, and SUVs that you see on the roads in the Rust Belt states.

Salt acts slowly and perniciously as it does its dirty work. Over time, it will eat through bolts; terminals; body parts; manifold pieces; suspension bits, and all the rest, until the parts, pieces, bits, bolts, and terminals are all rusted-out and broken.

Watch for news about safety recalls for not only the Ford F150 but also other Ford SUV and car models. You will also receive information about planned changes to the Ford F150 and other trucks. Click To Subscribe To Torque News YouTube Channel For Daily Ford and Automotive Industry News Analysis.

If the bolts that hold the power steering motor in place corrode, it will become detached from the housing and the vehicle will lose power-assisted steering. The bolts did not receive the proper application of wax to keep them from rusting. If there is no power-assist then the steering will become cumbersome and difficult, especially at no or low speeds. In a front-drive vehicle such as the Fusion or front-drive SUV such as the Edge, the steering effort becomes even more cumbersome due to the use of the front wheels to both drive and turn the vehicle. At lower speeds, the lack of power-assist can increase the risk of crashes.

The recall is scheduled to begin early next month. At that time, Ford will notify owners and dealers of the repair plan and recall. Dealers will inspect and replace the power steering gear motor-attachment bolts and apply a sealer. If instead, one or more bolts are broken or missing, the dealer will also install new steering gear.

About Marc Stern: I have been an automotive writer since 1971 when an otherwise normal news editor said "You're our new car editor," and dumped about 27 pounds of auto stuff on my desk. I was in heaven as I have been a gearhead from my early days. As a teen, I spent the usual number of misspent hours hanging out at gas stations Shell and Texaco (a big thing in my youth) as well as working on cars. From there on it was a straight line to my first column for the paper, "You Auto Know," an enterprise that I handled faithfully for 32 years. Not too many people know that while I was writing YAN, I also wrote and managed computer documentation for a good part of my living. My best writing, though, was always in cars. My work has appeared in venues including Popular Mechanics, Mechanix Illustrated, AutoWeek, SuperStock, Trailer Life, Old Cars Weekly, Special Interest Autos and others. You can follow me on Twitter or Facebook

Sources: There were several sources used to prepare this story. The Car Connection, an independent source of news and information, presented a good wrapup of the information involved, while Consumer Reports presented useful, hard tips. Meantime, the rest of the item was based on the author’s first-hand experience with driving a non-assisted front-drive vehicle for several years, as well as having spent the last 55 years operating a vehicle (as well as reporting on them) in the northern tier of states where things do rust out.