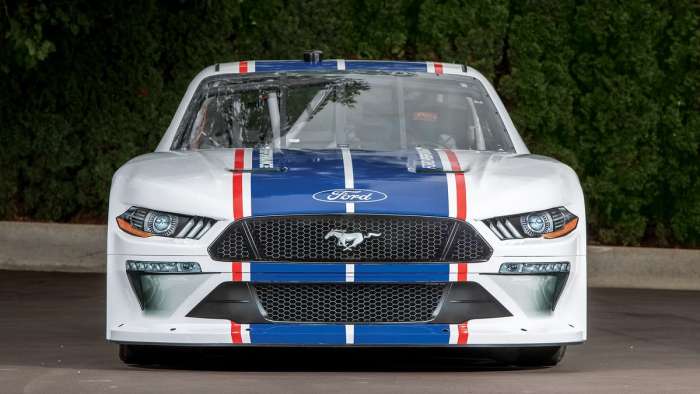 Why Ford is Unveiling Xfinity 2020 Mustang Race Car This Week

Xfinity race series fans already have a reason to be excited about February's start of Speedweeks in Daytona. Ford is using one of the biggest car events of the year to unveil its new race car!
Advertisement

Ford is unveiling its newest racing 2020 Ford Mustang at a huge event in the Motor City. The Dream Cruise is rolling down Woodward Avenue in Detroit’s northern suburbs, drawing a million car lovers to the area. Ford is one of the sponsors of the huge festival dedicated to everything automotive. What better place to show racing fans the latest NASCAR Xfinity Series design?

Ford Motor and Ford Performance teamed up for the latest 2020 Mustang race car. Technically, this is the fifth all-new racing Mustang to be unveiled in the last year. Fans will get the chance to see the 2020 NASCAR Xfinity Series Ford Mustang in action during Speedweeks at Daytona International Speedway next February. The Xfinity Series race is scheduled for Saturday, February 15th.

Ford has redesigned all of its racing vehicles, since phasing out nearly all of its cars, except the Ford Mustang. Ford has updated all of its race cars to more closely resemble the newest 2020 Ford Mustangs as well. Race Fans know that all of the vehicles and engines in the race car series are heavily regulated. The different bodies are pretty much shells representing the different automakers.

“We’ve always talked about Mustang being a car that was born to race, and it’s been gratifying to see it performing so well in multiple series around the world,” said Mark Rushbrook, global director, Ford Performance Motorsports. “It’s a credit to all of our engineers and teams that have worked so hard to make Mustang a championship contender right out of the box.”

The racing Mustangs are designed by teams that include Ford’s engineering and aerodynamics experts based out of the Ford Performance Technical Center in Concord, NC. The facility has evolved from a racing-only facility to a test-bed of development for production vehicles as well as motorsports. Ford says that many of the same experts worked on the all-new 2020 Mustang Shelby GT500.

“Ford and NASCAR have enjoyed a long and storied partnership, and the iconic Mustang has solidified its place within that legacy with an impressive performance in the NASCAR Xfinity Series,” said Ben Kennedy, NASCAR managing director of racing operations and international development. “We’re looking forward to seeing what the newest generation of the Mustang will do on the track.”

It is only fitting that Ford would unveil its latest race car during the Woodward Dream Cruise. Ford is one of the major sponsors of the Dream Cruise that takes place along the storied Woodward Avenue. Ford has a special area known as Mustang Alley that features over a thousand pristine examples of Mustangs. Ford Performance also has huge displays. One of the most popular this year is dedicated to the all-new 2020 Ford Mustang Shelby GT500. Ford also recently announced new upgrades to the 2020 Ford Mustang Shelby GT350.